Our Location: Quail Ridge Rv Resort, Huachuca City, Arizona
A nice night for sleeping with the vents open, one of these nights I'm certain we'll leave the windows open too. Maybe tonight.
I slept later than usual, not waking until 7 am. I think the higher day time temps may be tougher on us than we think. Riley didn't start moving around until I was making noise in the living room around 8:15 am. She tried to tell me she'd been awake for a while but I could hear her snoring. Or at least I told her I could.
We were debating about what to do today. We had some plans but in the end decided we'd feel better with just doing some looking around and getting some groceries.
We climbed into the Dogsled and headed for Huachuca City but ended up slipping on down into Sierra Vista. A nice little town with plenty of shopping and a LOT of restaurants. We found the Safeway, took a spin around but didn't find any good prices or deals. The store seemed cold to us, even though we had sweaters on to combat the A/C. It was a nice clean store, big, spacious aisles, well stocked but it wasn't a fit for us. We moved on to Fry's Grocery a bit further down the way. There we grabbed a cart and started our shopping. We found some pretty good prices but you really had to watch as some things were quite a bit more expensive than we've been paying at Walmart. The store was well stocked, clean, and spacious as well. We will go back again for certain.
We drove off to find the Walmart, looked for a few clothing items but found only a couple of things for Riley. Hard to believe they don't have any capri's, shorts, and t'shirts out, instead it's long sleeved sweaters, knit sweaters, long pants in varying material and believe it or not, fleece one piece PJ's for adults. We did manage to finish up our grocery list. We shouldn't need groceries for a week or more now. Believe it or not, they all fit in the fridge too.
We enjoyed the drive, and since it's Sunday there was no construction going on, just the pylons and etc. The drive was short, scenic and fun. We noticed a few interesting things along the way, including our first Segundo Cactus right in Huachuca City at the site of the historical plaque of Fort Huachuca. We of course had to stop and get a picture of this cactus.
Back home I made a couple of green salads, and doctored up the spaghetti sauce in the jar. I also made cheese garlic bread. While outside eating my salad, Riley cooked the spaghetti and that was lunch. Sorry, no pics, I forgot. 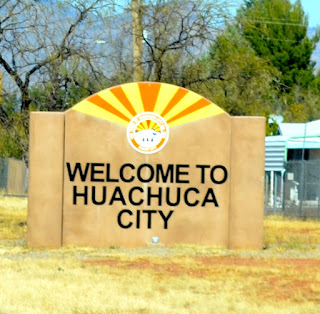 Since Riley was finding the heat a bit much I sent her outside where it was much cooler in the shade of our awning and I cleaned up inside. Bringing Riley some water, her hat along with my own water, hat and book we both settled down to read for a bit. She felt better after a while and we enjoyed some watermelon outside in the shade. 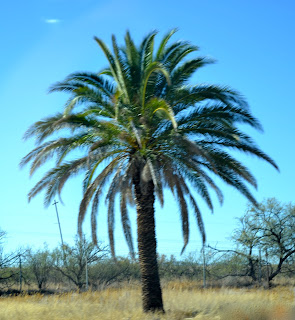 A short walk around the other side of the park when the temps started falling and we returned home to finish up the rest of the day in the comfort of our awing. The outside temps reached a bit higher than yesterday I think, I think the thermometer  reached 85F/29.4C during the afternoon today. It was cooler outside than in side.

I sat outside for a while editing pics and when the temps started dropping rapidly I came inside to finish up. We've closed up most of the windows and will close the rest just before going to bed. Think we'll leave the vents open tonight though.
So that was our first full day here in Quail Ridge. A nice quiet day, relaxing and warm. We'll take it. Thanks for stopping by. Feel free to leave a comment.
Until next time...Take care, be safe,
Deb