We both decided to head out before it got too warm and we went in similar directions but not together. Riley followed the road and once again climbed to the top of the plateau and enjoyed the view while I headed off back to the box canyon where I walked when we first arrived in the area. I thought there would be lots of blooms but alas there was none. It was a very long hike for me but I  enjoyed it.

I walked cross country until I arrived where Michael and his friends had parked and then I stuck to the road from there. I walked long past where the trail ended and kept going, at one point I thought of trying to find a way through but then realized I’d have a very long walk back home and so just turned myself around and started back.

I met up with a few semi locals from the Bouse area where they live 6 months of the year, the other 6 they live in Oregon. I forget where he said. No names, just some friendly fellas. We chatted and discussed numerous thing before parting ways but not until I learned the fly issue is new since last November and everyone is blaming a chicken farm that recently opened. I think they may be right. Even a Buckeye suburb lodged over 35 complaints last November about the flies. So I’m not the only one thinking they are terrible. 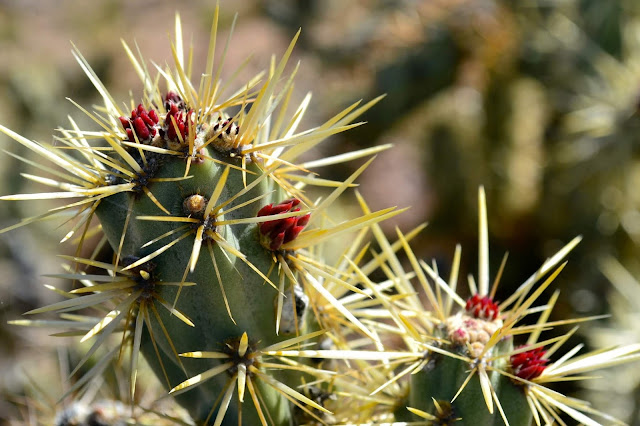 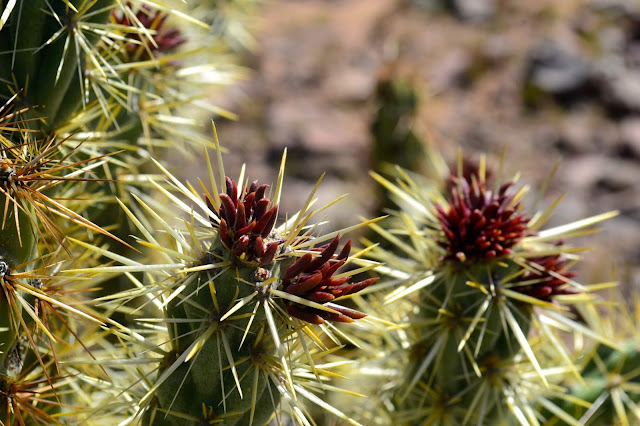 Ironically Riley met with the same four fellas after they left me and headed over this way. I also managed to see them on my homeward walk and chatted some more with them. Nice fellas with a big golden Labradoodle named Yuma. Not all like Doug's Yuma but friendly like him. I also chatted with a fellow Ontarian for a few minutes as we too compared notes on a few things.

It was a much longer walk than I expected it would be and much hotter than I expected as I was gone longer. I walked just under 8.5 miles and was gone about 3 1/2 hours. Some of that time was spent chatting with a few fellas so I think I walked a little less than 3 hours.

I chatted with daughter Courtney tonight for a half hour or so, catching up on the latest news. Lots of snow in Toronto, she’s ready for winter to be over. Cold and sunny or warmer and snowy. Not a whole lot of good choices there.  I tried my dad but his line was busy. Maybe I’ll try again later.

So that was our day, pretty warm, pretty enjoyable and I am certain we will both sleep well tonight. Thanks for stopping, I hope you had a wonderful day.

(The last of my hiking photos)
A nice warm night in the history of our time here, we stayed above 50F/10C all night, yeah us. The sky didn’t look too promising this morning and so we decided to do a rainy day thing and do some errands. Little did we know that the day would turn out very warm, full of sunshine and spectacular.

After a ham quesadilla (of course with many other things as well, blended cheeses, salsa, celery, onions, peppers, mushrooms, and eggs too) for breakfast we loaded up the water jugs, garbage and ourselves heading toward Buckeye. I had an errand that wasn’t on the list but it was the first thing we did, I had the Big Dog’s tires rotated, I’ve been meaning to do it for a while now and today I just made up my mind. From there we headed off to Walgreens for water from their nice outside dispenser, and then to Fry’s for fuel ($2.65 per gallon), and some groceries. After that it was a Walmart stop for haircuts, and numerous other things, including groceries. We managed to find most things on the list and enjoyed the exercise.

Heading home we veered off of I-10 before we reached our Tonopah exit and instead jumped off at Wintersburg exit. They have a Dollar General and I wanted to pick some cleaner that our friend Lorne (A Place Called Away) mentioned. We found it in the big bottles but not in the spray bottle. No problem we’ll just use one of our empty ones. After that it was home and time to unload the Dogsled.

When we got home the Igloo was swarming with flies, inside and out even before we got the groceries and water inside. We managed to get the groceries away and then I started with the swatter and the Raid can. I don’t normally use any bug spray but this was ridiculous, as it was last night just after dark, they seemed to find a way inside. So I closed the bedroom doors, vents, and windows, sprayed everywhere, and most especially around the slides. We didn’t spray in the living room/kitchen area as I don’t like doing so around food. Eventually I think we got most of them and then settled down to eat, do you know it was 4:30 pm? Where did the day go?

After about an hour I opened the doors and vents to air the spaces out and sure enough it seemed to have done the trick. This evening I took the swatter outside and started around the door and took the spray to the underside of the slides again. Hopefully that helps us tonight. It’s crazy the number of flies here.

So there you have it, our busy day and it was very busy. We hope you enjoyed your day where ever you were and doing whatever you were doing. Thanks for stopping by.

Our Location: Near Tonopah, Arizona
Hiking, lunch and Riley baked some cookies today. Other than that not one exciting happened, so I'll leave you with still more photos from a hike I took a few days ago. Today I once again stayed on the desert floor making my way round trip just under 5 miles. I meandered here and there and was home at just about the 2 hour mark. Not a bad way to spend some time. Enjoy the photos.

Thanks for stopping by, I hope you enjoyed your visit.
Until next time... take care, be safe,
Deb

Our Location: Near Tonopah, Arizona
(Today's photos are from yesterday's hike)
A nicer morning today, warmer by far than the previous week and looking better as we check out the up coming forecast. Blue skies, sunshine and a wonderful day ahead. What more could one ask for?


After our morning chat and hot drink Riley headed off for her walk while I finished up my blog reading. After that I too headed out the door while chatting with my friend Linda back in Lively, Ontario. Snow, rain, cold, etc, the usual winter weather, we then moved on to more interesting stuff and eventually we were all caught up after about an hour. Always nice chatting her, we seem able to pick up right where we left off after each chat ends.


I was sort of following in Riley's footsteps but then after a certain point veered off to an area I wanted to check out. However today I was sticking to the desert floor to give my knees, hips and feet a break from the steep slopes. It worked pretty well with only a few very steep washes to get through. I wanted to find out how the motor home in the last number of days photos managed to get where it is at the base of the mountain.
I found the road, and headed off toward Courthouse Road to see which BLM roadway it had traveled to reach this spot. I was about 2/3 of the way to Courthouse Road when I was hailed by a fella in a Mercedes Pleasure Way. He came out to chat and we ended up chatting about a number of things for about 45 minutes. His name is Brian and he's originally from Nova Scotia but spent the last 30 years in Toronto. He's new to the full timing since July. He's been enjoying his first adventure and been making a lot of friends. Nice fella.
Finally I managed to get away and headed off cross country toward the Igloo. I figured Riley might be wondering where I had gotten to. It wasn't long before I was hello'ing the Igloo and making my way inside. I was gone a little under 2 hours but spent a great deal of that time in one spot, standing still. I put in around 3 1/2 miles on my outing. Most of it on the desert floor which I think helped my knees but not much else. I checked the time and noted it was just shortly after 1 pm when I walked in.


Lunch was a nice sausage/veggie quesadilla. We both enjoyed it but would change it up a bit next time as we always seem to think of things we could have added that would make it better. By the time we'd cleaned up after lunch it was already getting to be pushing 3:30 pm. A couple of inside chores and before we knew it the air was cooling down and we had to shut up the Igloo. The flies are starting to be an issue even sitting in the sun today. Hopefully they go away soon.


A chat with daughter Bradey had us catching up on the events of home ownership and life in winter bound Southern Ontario. They are doing well but like everyone else are tired of winter. I think the snow shovelling is getting pretty old really fast. Hopefully things slow down some and winter eases up for everyone in the north.

After that I chatted with my dad just to see how he managed with the big storm yesterday. They lost power for a number of hours, the roads were closed, plows pulled off the roads, and with the high winds causing enough havoc with blowing snow and howling subzero winds to keep everyone housebound. Not a pleasant day at all. It seems more snow is on the way again.

So that was our day here in the great American Southwest with a touch of home tossed in, making us thankful to be out of the winter weather. I hope where ever you were today, and whatever you may have been doing that your day was as excellent as ours. Thanks for stopping by.