Our Location: AOK Campground, Amarillo, Texas
(all pics today from Palo Duro Canyon State Park)
What a difference a few hours makes. This morning was cold, 37F/2.7C inside the Igloo. It was 47F/8.3 C outside according to our thermometer. So we cranked up the heaters and let the place warm up a bit, opened the night shades and let the sunshine in which helped too. Before long it was toasty warm in here.
We did our usual morning stuff, you know the routine things you do pretty much each morning and then I sat down to pay some bills on my own secure internet thanks to the Verizon jet pack. The damn thing wouldn't load more than one page, then it would just sit there. Needless to say I was more than a little ticked off, I just replaced this thing within the last 10 days, and haven't had been able to use it since June. So we loaded up my computer, the jet pack and headed into Amarillo to the Verizon Wireless store.
However we were delayed by a nice gentleman from Elberta, Alabama. He used to own an RV park there, but has since given it to his son. We chatted about the small town of Elberta as I've been there many times, even stayed there a few times. Not at his park but near by. Funny what a small world it is, don't you think? We discussed his trip to Alberta, Canada and their journey to the Cumberland Ice Fields ( I think that's what he called it) and how there was so much snow, etc. For a fella from Alabama anything more than a flake is a LOT of snow. ~laugh~  We parted with each of us wishing the other safe journeys and an enjoyable day. 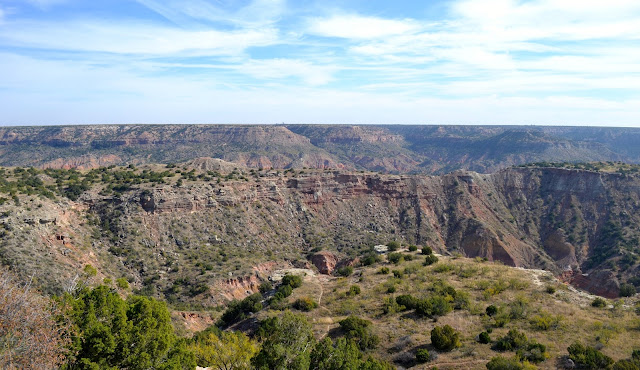 It took us about 20 minutes to get to Verizon Wireless and you won't believe what happened. It worked perfectly, not a blip, not a hick up. I know the guy thought I was nuts but it's like taking your car to the mechanic and it has healed thy self. ~laugh~  The stupid thing was as fast a greased pig in a tight spot.
We loaded ourselves back in the Dogsled, heading out to Palo Duro Canyon. Now you must realize that I had been in such a state over this stupid jet pack that I completely forgot the walking sticks and the extra bottles of water. Didn't realize that until we were about 10 miles from the Canyon. Oh well, we'd manage, we can buy water and we weren't sure we wanted to hike down and up the canyon anyway. 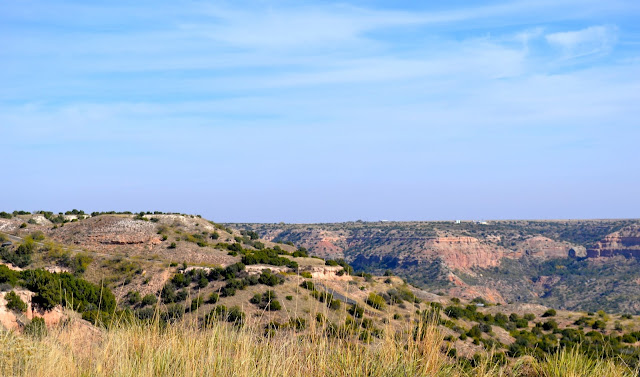 Just before the entrance to the Palo Duro Canyon State Park we noticed a sign for riding stables, and debated about going via horse down into the canyon. We however opted to have a look first and perhaps do the horse back trip on the way out. A $5 per person fee was paid to a nice fella in the booth and for our money he gave us a single piece of paper with a map type bit of information, and rules of the park. We headed off around the corner, another corner, and yet another before we began seeing what to us was absolutely amazing. We've never seen anything like it before. It was truly awesome. The canyon stretched before us in all of it's splendor with various shades and shadows, hills and valleys, crags and crevices. It was worth the drive to Texas to see it.
I can't begin to explain the colours, although I'm sure many of you wouldn't be awed by such a sight as I'm certain you've seen them before but for us first time viewers it was amazing. The colour layering the rocks, the distant haze and beckoning shadows couldn't be captured in the photos but it gives you an idea of what we seen.
We checked out each and every nook and cranny we found, from the welcoming gift shop to the numerous campgrounds on the canyon floor. We debated about staying there for a night or two but the drive UP the canyon road was enough in just the Dogsled, I couldn't imagine hauling the Igloo up the small, winding path. The campsites were nice, the views amazing but the road scared the crap out of me when I thought about hauling UP. Down didn't bother me, with tow, and an engine brake, plus lower gears, I wouldn't be too worried. The haul up would be on the outside of the lanes, near the edge, with no rails, and some pretty sharp corners. We opted to pass. ~laugh~ 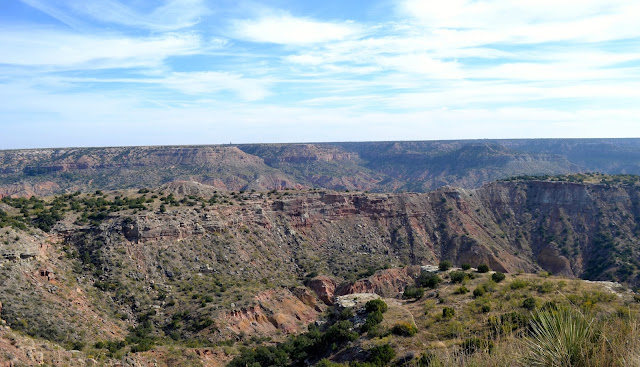 The park was opened in 1934 ( I believe) and at one point they had a camp there for the workers that were making the park into a usable attraction, making roads, building buildings, etc. It was a thriving little community where these men lived but all that remains is the stone chimney from the community building. 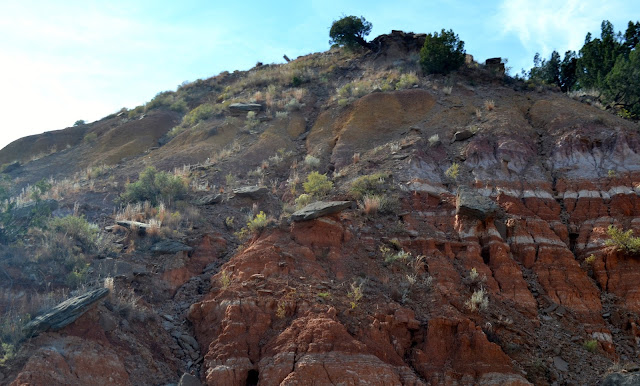 Palo Duro Canyon is the second largest canyon in the USA, second only to the Grand Canyon. It is vast with numerous hiking trails and attractions to be seen. We took some time to check out the Pioneer Amphitheater and I checked out a couple of different seats to find which one would be the best view. ~laugh~ Of course it was just the two of us, so we pretty much had the pick of the house. No show to see though, but it was still interesting. 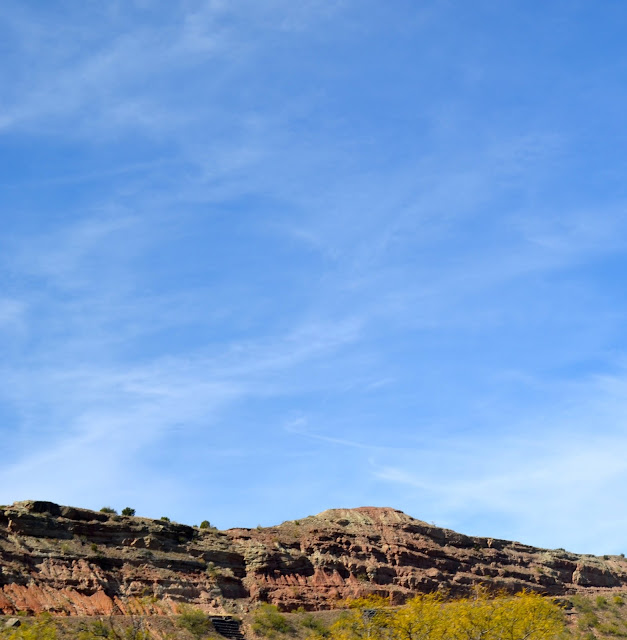 You can rent some small stone cabins in the canyon as well. They are made of stone with only one or two windows, and doors. They aren't much bigger than about 12 X 12, or at least they don't appear to be. They have a small chimney which indicates a cook stove or wood stove, screens on the door and windows. Even the roof looks to be made of stone. Interesting little buildings. 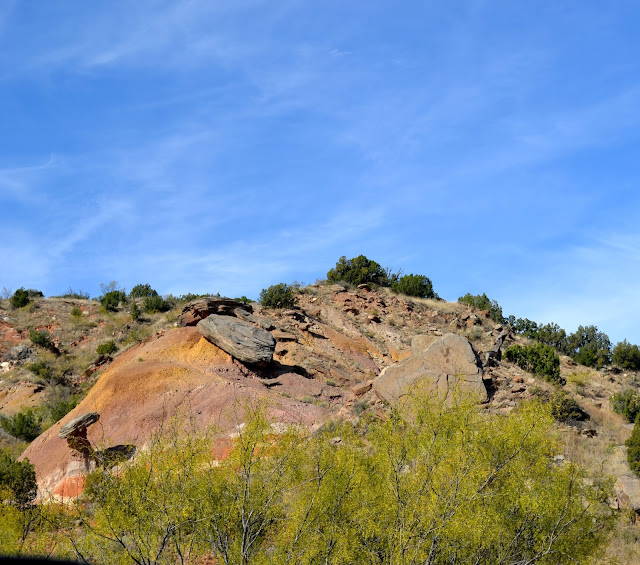 The campgrounds vary, some are for groups only, some are for tents only, some for rv'ers with horses only, and others are for the rest of the folks. A couple of dump stations were visible, not sure if they had sewer hookups or not. Some were back in, a few pull thru's, and all of them had a covered picnic table and grill area. 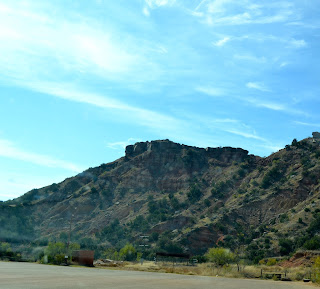 Flash flood warnings were in evidence in various places along the road and I wondered how that would effect the campers parked nearby. The constant 'flood' number looked to be no more than 5' at any of the bridges we came across. That's still a lot of water to come barrelling down the gully!!
We spent a couple of hours in the park, enjoying the sites and snapping pics. We snapped over 200 pics, I slimmed that down to just over 100. Don't worry, I'm not going to show them ALL to you. ~laugh~ Just a few.


For our $5 fee we certainly had a million dollar view from numerous places. With more time and energy there was a great deal more we could have done to enjoy the canyon and perhaps another time we'll come better prepared. Upon heading out of the park the riding stables called me but Riley wasn't interested, so that too will be for another time.
Home around 3:00 pm Riley cooked up our lunch while I finished dumping the tanks, and putting away the sewer hoses and a few other things we had pulled out as well. Lunch was excellent, mashed potatoes, spaghetti squash, and ham steaks, along with a nice green salad. We tend to have our big meal about mid afternoon and then something light for dinner. It seems to work better for us. 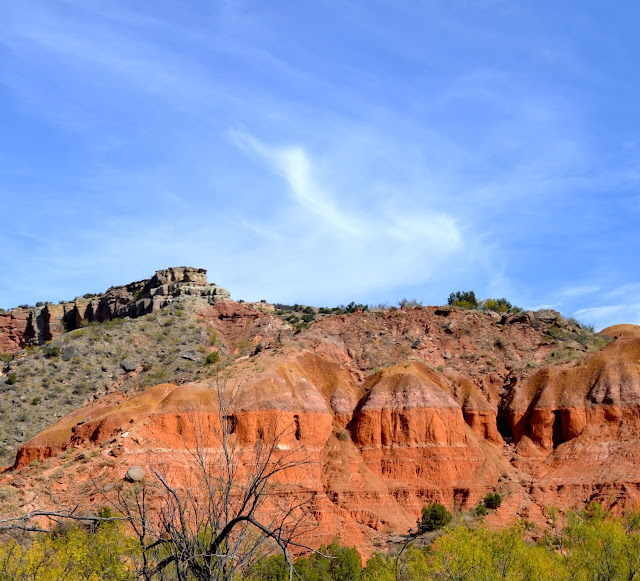 So there you have it, a great day with the temps reaching about 60F/15C with beautiful blue skies!! We both enjoyed it very much but are looking forward to hitting the road again tomorrow. New Mexico calls us and we're excited to answer!! 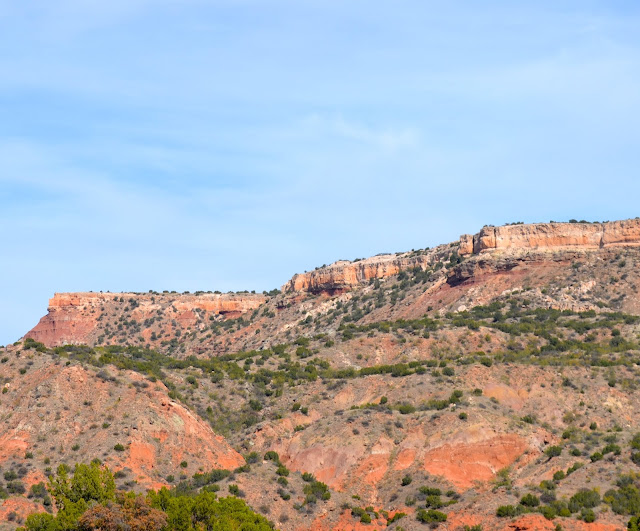 Thanks for stopping by, hope you enjoyed your visit. If you are ever in this area the canyon is worth the time and effort to visit. So keep that in mind.
Until next time...be safe, take care...