Our Location: Casino Moncton, Moncton, NB
We left PEI under overcast skies that were threatening to open up at any moment. It held off while until we reached our destination around noon, and continued the rest of the day, all night and is still coming down at 10 am today which is Friday morning.

We crossed the Confederation Bridge ($46 for 2 axle vehicles and $8 per each axle after that, our total was around the $64 mark) under cloudy skies and very little wind. I expected the bridge to be higher and with more cross winds and was pleasantly surprised to find neither true. Single lane each way, it's scenic and short about 13 km/8 miles I think. Leaving PEI in the rear view mirror and seeing the welcome to New Brunswick sign we are now officially heading in a home ward direction. We passed near the little town of Shediac (we stayed there on our way east) and travelled on to Moncton. The Casino Moncton allows RV parking for up to 7 days free of charge. Simply go inside and get a players card, also gives you $5 off of the buffet price. We dealt with an extremely funny fellow goes by the name of Ron who had us laughing the entire time. Nice place, we'll check out the casino today sometime. Note for those that are interested: RV parking is BEHIND the building. Follow the signs but continue on when you see the NO OVERNIGHT PARKING signs, follow the lane that runs behind the Casino to find the RV parking area. Lots of space, you need to go inside and get a card to stick in the window so security knows you're allowed there.


With rain falling we opted to stay home the rest of the day. It rained hard at times, rained all night and is intermittent right now. Hopefully it clears up by noon (although a high possibility of  heavy rain this afternoon) as the weather sort of indicates, which will allow us to do a few things outside hopefully. Tomorrow will be nice (again it's a maybe) and we can drop down to see Bay of Fundy and check out the beaches for a while. Sunday will find us heading toward Edmunston, with perhaps an overnight along the way. Extreme heat is forecast here as it is in Ontario for the long weekend, so we'll see how it goes and what we decide to do. Amazing the extremes we've been experiencing the last few days.


The pics were from our short 2 1/2 hour trip from Harrington, PEI to Casino Moncton, Moncton, NB. Thanks for stopping by.

PEI and some touring....

We laid over an extra day in Baddeck, NS due to rain, leaving Monday morning it was still raining and rained all day long. We opted to leave NS due to the weather forecast which had rain pretty much the entire upcoming week. Instead we headed out to Caribou Island Ferry heading for PEI instead. It rained the whole way and long into the night.

The ferry crossing took about 75 minutes, a bit rolling which made Riley ill but she recovered quickly. We were parked on the bottom deck which is for bigger vehicles and found ourselves among empty log trucks. A few other RV's behind us but still some empty spaces available. We put our feet on land and headed off toward Charlottetown and the little village of Harrington. We arrived and managed to set up in the rain but everything is soft and it took some effort to get us level.


Happy Birthday to sister Jan who celebrated on our travel day!! She's older than I am and younger than Dad. We'll leave it right there. 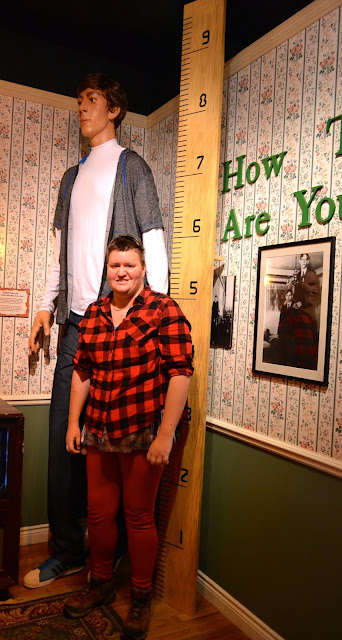 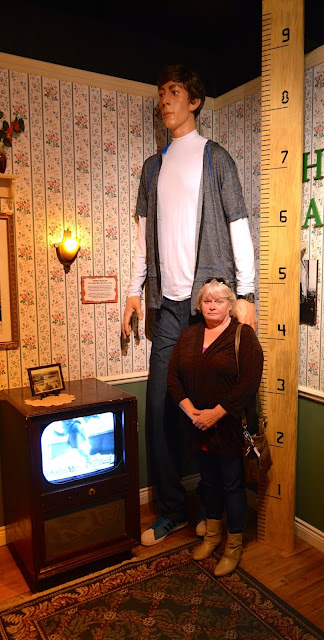 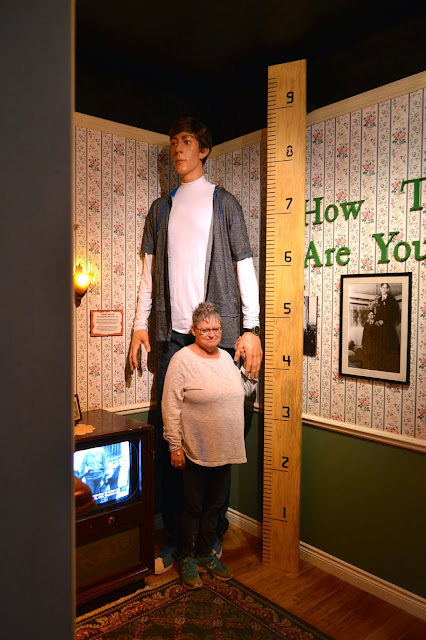 Tuesday morning found us seeing sunshine and wonderful blue skies, warm temps and we took full advantage of it. We headed out to Cavandish to tour the wax museum and Ripley's Believe it or not, then off to drive along the coast stopping in a number of different places, including the Acadian Museum in Miscouche, PEI. We eventually ended up at West Point Lighthouse and a quick walk along the boardwalk there. We were disappointed that the coastal highway doesn't really go along the coast but more inland and in order to reach the coastal views you pretty much have to find some 'no exit' roads and follow them to the ocean, which we didn't know at the time. A few places allows you views as you drive but not very many.

We enjoyed the day on Tuesday seeing a lot of country side and the abundance of Lupines that flourish wildly here in PEI and are referred to as Ditch Flowers. Tall Phlox also grows wild here and fills many ditches as well. We stopped for a quick bite in Summerside on the way home from our day of touring and enjoyed watching two fellows pulling up some oysters right in front of the restaurant. Back home at the Igloo we talked to a couple that has a unit here for the season and live not far from where we had toured earlier in the day. Friendly folks in these parts.


Today (Wednesday) we spent some time in Charlotteown touring a great deal of the city. Riley and I visited the Confederation House or Province House but it could only manage to watch a short video and see a few replicas of the original artifacts from Province House as it's closed for renovations. Jan toured some of the streets instead of coming with us. We all managed to find our way to St. Dunstan Basilica for a quick tour inside, as well as a walk along the waterfront at Confederation Waterfront Park. Some very cute little shops along the way. We also managed to check out a couple of laundromats before heading home to collect our dirty duds.

At home we picked up the dirty laundry, dropped off a few things at the Igloo and headed back into Charlottetown for a few errands. We are only a few short miles from the part of Charlottetown that we had checked out earlier and so were quite happy to tour first and leave the dirty clothes as home for that part of the day. We had the laundry completed quickly, we used the laundromat on Eden Street off of University Ave if anyone is interested. After that we headed out in search of a Chinese Buffet which we finally found just beside Walmart, which was good as we needed a few things anyway. So lunch, a couple of stops for items at Dollarama, Walmart and a drink for the Big Dog in preparation for our departure tomorrow. Today was the nicest day we've had on our entire journey so far, it reached a nice balmy 77F/25C with amazing sunshine and a fairly good breeze. We were back home just before 6 pm. The day was full for sure.

So ends our time here in PEI. It was nice, we enjoyed the two days of touring we've done. The weather for touring has been wonderful and we've enjoyed it a great deal. A cute spot, friendly folks and some amusing accents to be sure.

Tomorrow we move on to Moncton, NB where we'll be staying at the Casino there for a couple of days while we tour a bit of the area. Possibility of rain again tomorrow. We're all glad to be heading in a homeward direction and hopefully some nice weather. 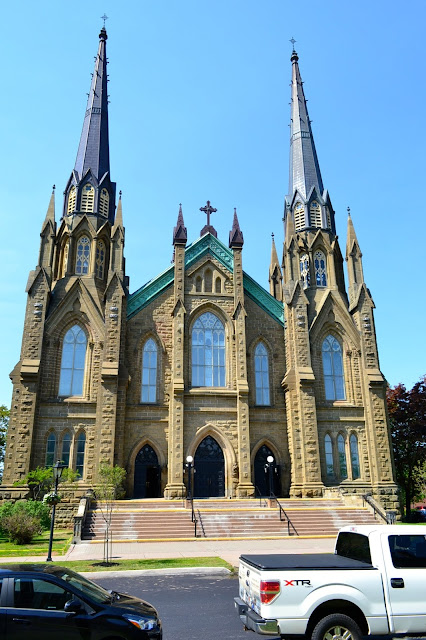 Thanks for stopping by, hope you enjoyed your visit.

Our Location: Adventure East Campground, Baddeck, NS
Woke to the sounds of rain again this morning but it's hasn't rained since we traveled here on Thursday. However it looks as if rain is the weather for the next couple of days. We're debating what we should do as we've all had enough of the wet stuff.

Yesterday (Saturday) Jan and I toured the Alexander Graham Bell Museum in the small town of Baddeck. Riley opted to stay home. The small town of Baddeck is very picturesque sitting on the edge of Baddeck Bay. Rolling hillside, lush greens of new foliage in various hues, quaint small town feel, it feels like new found awareness after a long sleep. The air feels as if it's gearing up for some busy times but they haven't quite arrived yet. Anticipation I suppose is the tinge in the air.

We toured the museum which was educational, informative and busy. Mr. Bell was indeed a very curious man, smart, intuitive, and busy. His interests ranged over a wide variety of areas, from water, air and land, as well as helping the deaf. Truly an amazing man.

Back home we all enjoyed the park for the remainder of the day. We watched children and adults alike participate in the Western Weekend. Sack races, three legged races, water transport, ring toss, etc. Clearly a good time was had by all. Around 5:30 there was a chili cook off in the big tent where 14 different pots of chili were in the running. Number 14 was the winner by overall ballot but none us picked that particular batch. Rolls were included and folks were encouraged to go back and taste again their favourites. A donation box was available. Such wonderful events planned for the special weekend courtesy of Katie, the sister of the park owner, Shane. Shane is only a year into this park ownership but doing amazingly well. We wish him luck!! The evening ended off with a movie for the three of us and then off to bed.


We are debating about moving on today, what we should do and where we should go. Various weather forecasts have us thinking it may be time to head  toward PEI or back toward the inner reaches of New Brunswick. None of us have an desire to tour Halifax in the rain, it's just not fun. So we will decide that when we are all up and moving.


Thanks for stopping by, enjoy more pictures from the Cabot Trail.

Our Location: Adventures East Campground, Baddeck, NS
Today we toured the upper part of the Cabot Trail. With brilliant sunshine, warm temps and warmish to cool breezes we spent the entire day on the road. Leaving home around 9 am we stopped for lunch around 3 pm at Mountain View Restaurant at Pleasant Bay on the top western side of the Cabot Trail, and continued on home arriving around 6 pm.  We stopped numerous times, enjoying the sights, the weather and snapping pictures!!! Instead of giving you a written description of what we seen today I'll just add a few pictures over the next couple of days. Enjoy the pictures of the upper Cabot Trail in Nova Scotia.

That's enough for today, I'll post more another time. I hope you enjoyed your visit.
Until next time... take care, be safe,
Deb