A very nice morning, it was 52F/11C when I got up at 7 am this morning. I pulled on shorts and it was comfortable!! Yeah, we've finally found some heat, and we like it very much.

We had plans this morning but they hinged on a few things. I intended to service my generator this week but for some reason I can't find the manual or the spark plug tool. I don't remember leaving them behind but I can't find them anywhere and so I must have. I asked Doug if he the tool and he said yes, so I was going to head over there use his spark plug tool and then go on into Yuma to get a new plug, come home and do the service. However I decided it would be easier to find a Honda dealer and have them just do the service and so that's what I did. We dropped in to see Doug and Yuma for a few minutes, gave him some butter that he needed and  then headed off to Liberty Motorsports on Yuma Avenue. I'll pick it up in a day or two.

Riley and I headed back to Walmart for a few items we forgot yesterday since we're already just down the road anyway. On the way home we opted to stop at Lin's Chinese Buffet for lunch. It was reasonable in price $26.00 for the two of us but again we found the food to be cold. We've both decided we won't go back.

Back home we decided we've done enough for the day and so have spent the rest of the day doing very little. I sat in the sun/shade to read for a few hours but have now moved inside to do my post. It's been a nice warm day and we are enjoying the heat!!

A warm night and a nice morning with some wind but nothing too much. Of course it comes from the north and so keeps the early morning a bit coolish enough to need a hoodie when you are out in it. Breakfast and a walk started the day off, next I vacuumed the Dogsled to get rid of Yuma's hair. Riley and I had a number of errands to run today and a few more tomorrow too.

Our first stop was Best Buy, they advertise camera repair, it was a no go. I called Kurt's Camera repair listed as serving the Yuma and Winterhaven area, except it's located in San Diego and I would need to send my camera there.  I asked a few folks but to no avail, there is no where to get my camera looked at here in the Yuma area. Oh well, I'll just keep using my phone for now.

Actually Best Buy wasn't our first stop, our first stop was to see Doug & Yuma ( Miss Adventure Travels ) just to kind of make sure everything was good with them. Yuma was happy to see us and wanted some pets and attention. It was good to see Doug settled and enjoying the morning.

So, second stop was Best Buy, third stop was U-Haul to get propane. For less than $32 USD my big tank was filled to the top, which would work out to be about $50 CAD, about the same as back home on the Island for an exchange. It's the first time I've had someone rip the exchange label off, said he had to check the entire tank for rust or wear spots but put another sticker back on it when he finished. It still has a couple of years and I truly can't figure out why he needed to pull the sticker off. Anyway...

Our next stop was Walmart where we left a sizeable deposit for a very full buggy. We've been running a little low on a few things and needed to stock up, we also managed to find some nice new chairs and of course the Big Dog needs to keep his favourite drink stocked up, Def fluid, or he won't run! We managed to get just about everything on the list too.

Back home we put all the groceries away, separated what needed to be separated, and even managed to have some lunch, all before 4 MST.

Yesterday I chatted dad, daughter Bradey, and sister in law Janet. It was a day full of catch up, or at least an evening. Grandson Auston has been battling a cold for a number of weeks, it seems to go away to come back again within a few days. Hopefully some antibiotics will clear everything up. His brother Lincoln hasn't been sick at all, lucky little fella. Bradey and hubby David are doing well too. SIL Janet reports Dennis is doing his therapy (broken hip) and is hopeful to be back on the golf course by shortly after the new year. We do hope he manages to get back into it, he does love it and plays every day out here in California.

A few more errands tomorrow and so the picture taking has been on hold. Sorry about that but it is what it is. I'll get back to that in a day or two, honest.

Thanks for stopping by, I hope you enjoyed the visit.

This morning Doug ( Miss Adventure Travels  )  sent me a pic of the very beautiful sunrise over the Igloo. It was a perfect send off for us. Riley and I were ready to go about 8:30 am but we had told Doug between 10 - 10:30 am would be our time to pull out. Riley and I headed off for a walk while Doug finished doing whatever it is he does to get ready to roll. We were back around 9:15- 9:30 am and Doug was ready to start the big diesel engine. It started well, and before long we were all off heading down the road, AZ 95 southbound.

Construction had us stopped for between 20-30 minutes just north of the stone cabin but after that it was easy rolling. This is Riley and I's first time coming down this road, we usually come to Quartzsite from California on I-10 East after we visit Janet & Dennis in Indian Wells. However this year we changed things up a bit and so as everyone that travels AZ 95 the first time does, we stopped at the Yuma Proving Grounds for the photos of the big guns at the gate.

The WL started right up and we were off once again heading southwest toward the Yuma, Arizona area where we would connect with I-8 West. Doug & Yuma pulled off to put some go go juice in the big rig and Riley & I kept motoring on and found our way to the rest area on I-8 West where we filled up the fresh water tank and left a bag of garbage in the big dumpsters.

We crossed into Pacific Time when we entered California before lunch time. We will however be staying on Arizona time since everything we do here in this area is in Yuma, Arizona. I called my dad after we got set up and chatted with him for a while. He was busy doing something but stopped to chat with me for a while. Always nice to chat with him.

So that's what's new with us over here at the Igloo. I hope you enjoyed your visit.

A few photos from various places....

A very quiet day, the four of us took a truck ride to check out a different area for parking while in the area in the future. Other than that, it was a very quiet day. I hope you enjoy the photos tonight, they've been kicking around for a while now. 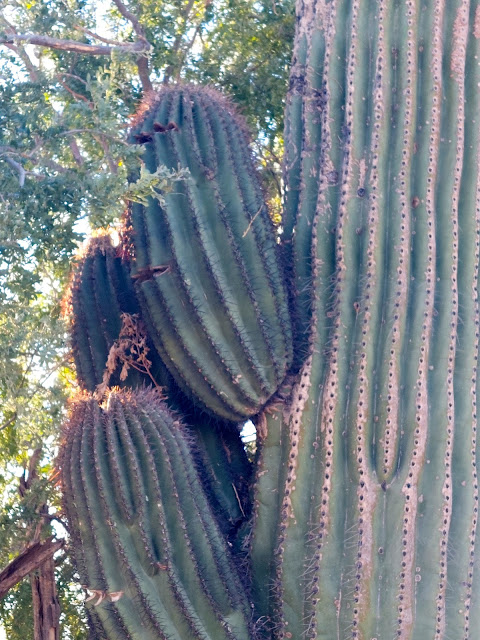 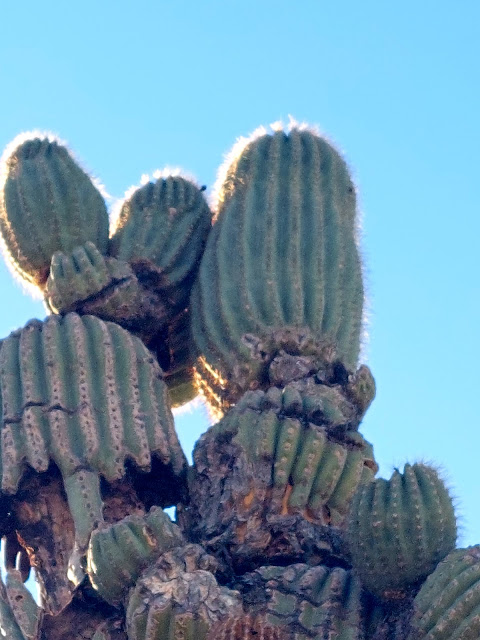 Ivan ( Roadtrip  ) your blog showed up sometime after 7 am this morning on my side bar but quite far down as it was posted 2 days ago. It wasn't there around 5 am or at least I didn't see it. 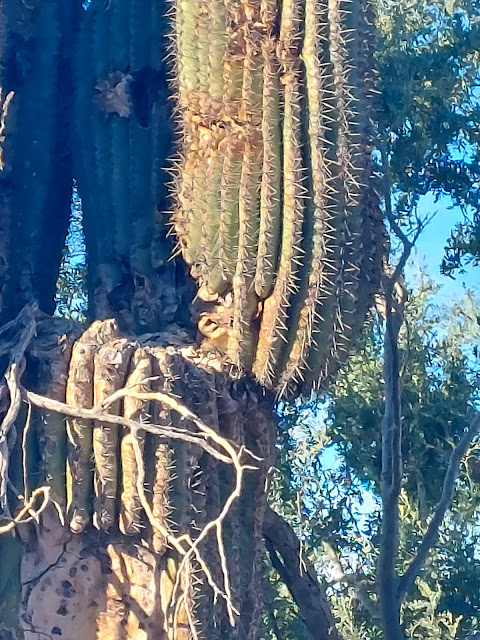 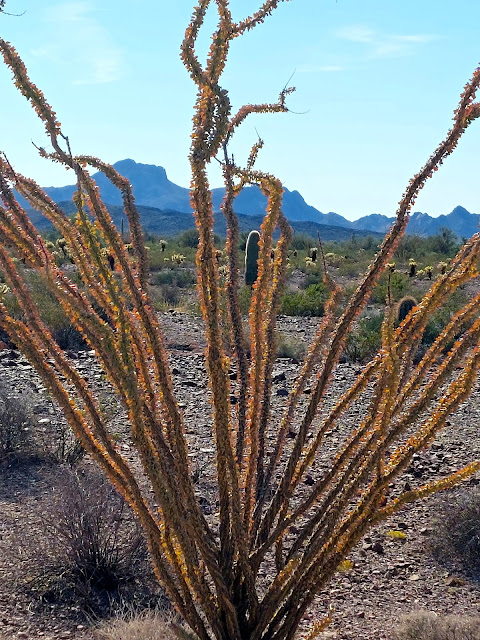 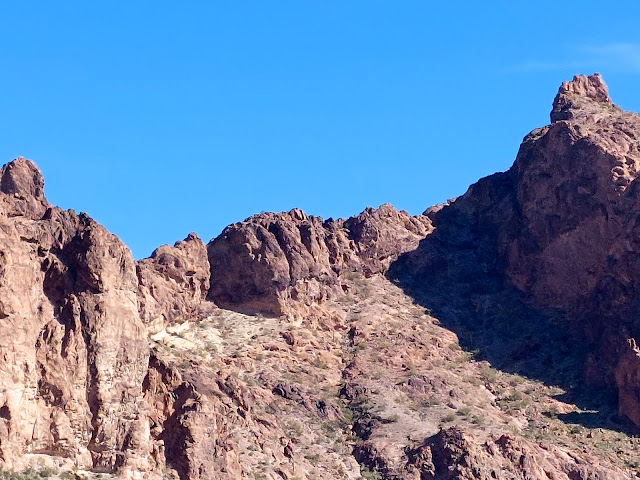