(all photos taken in the campground with the Nikon camera)

The morning started off loud and flashy before there was even a hint of morning light in the air. The long awaited storm came upon us with a vengeance around 5:30 am or so. The thunder was loud and seemed directly overhead, the lightning was flashy and often, the rain poured down in buckets at a time. This carried on for some time, probably close to an hour. Finally the skies lightened, the rain tapered off, and thunder along with his pal lightning moved off to annoy someone else. 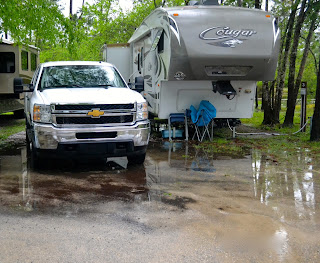 The water was laying in many places but also running in other places. If you know anything about the park here you will know that the swamp is easily filled and the water usually flows INTO the ponds, today the water was flowing across the north road between the maintenance shed and the bath house, thru the middle playground area, going thru the tile at the end of the row then making it's way across the back of the row to the EAST pond, from there it was flowing thru the tiles back to the west north west direction into the swamp. ~laugh~ A circle for sure.

There wasn't much damage, a few loose branches came down but other than the water there was nothing to talk about. A few campers had leaks during the storm but of course anytime you get a strong wind and rain it's possible to have a leak due to driven water. I think it's a tougher kind of thing to solve as you're not certain if it's actually a leak or if it's a case of being driven into a vent opening, etc. Ah well our Igloo was dry, we're happy campers. 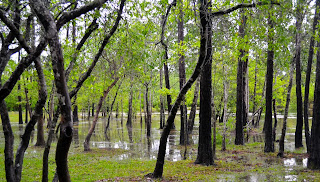 No fire this morning, too wet, too windy, to loud, too flashy, and you get the idea. However we did manage to all come out after the water stopped falling from the heavens, we assessed the water situation, discussed a number of things but basically just patted each other on the back and glad we managed the storm with such ease.

Monday is cleaning day as you know but part way thru the work I grabbed the Nikon camera put on my new rainy boots and headed out to take some pics. I know you're thinking I left Riley to do all the work but it's not true, honest it's not. ~laugh~ I was able to get tonight's pic while enjoying the cooler air. Even managed to chat with Mr. Swilley for a bit at the maintenance shed. He assured me if we get flooded out I'll have a spot up by the office. I told him I appreciate it but if we get flooded out we'll just head out and start our trek north, but otherwise we'll be leaving here Friday morning. 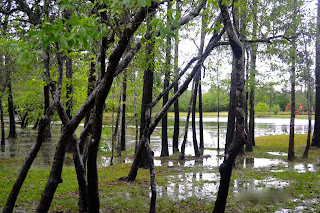 After a quick stop to feed the camp cat I headed home to finish up my part of the housework. It was a deep cleaning day today, I emptied the area under my bathroom sink, cleaned, tidied, sorted, tossed and kept a number of items there. Same thing in the medicine cabinet, the closets, and my dresser area. Next I tackled the pantry, rearranging and making note of the things we have. After that it was time to wash the floors. That done I had to have some breakfast as Riley had eaten earlier. The time was now 10:45 am. It was a late breaky. ~laugh~

Finished eating and decided to tackle a few housekeeping chores of a business nature. Having trouble paying my Verizon bill on line, I have no zip code to attach to my credit card so it refuses payment. I know rare for a company to refuse payment but you get the idea. ~laugh~ I ended up on the phone to Customer Service getting this issue fixed for future payments. The nice young man explained the plan to me again which wasn't anything like the plan I originally signed up for but we discussed a newer plan that might work better for us, we'll see when reach the island if we can use our mifi or not. Then we'll discuss our options. 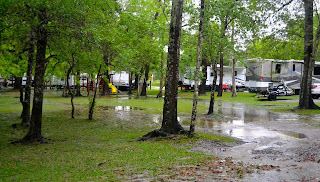 As I"m on the phone with the man from Customer Service I see Charlene & Billy heading out, and I realize it's Red Beans and Rice Monday but I'm just starting to get my issue resolved, hmmm...what to do.... We opted to miss it today even though its to be our last one of the season. I didn't want to lose my place in line with Verizon and I couldn't take the guy with me. ~laugh~

After that phone call I had to make a call to Southern Chevrolet in Foley, Alabama  to ask about fees I may have paid while using the debit machine. I spoke with Miss Kim in the finance department and she assured me there were no fees attached to the machine but that I had been over charged when I purchased the truck. Today they have credited my debit card over $1000.00 US, yes that is a thousand! That made me smile. ~laugh~ Now I"m waiting on a letter to state the the price I paid is not what's listed in the paper work so I won't have to pay extra money on it. 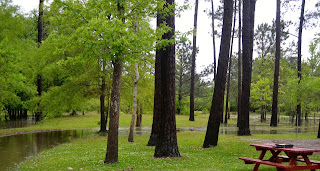 From there I decided I couldn't do anything more until I get this information so we stomped out the door into the Dogsled and with the crack of a whip we were soon rolling over to the sports complex for me to walk. Riley read her book while I put in my 3 miles today. It was pretty warm walking at noon thirty!! I enjoyed it though, it reminded me of my running days when I would run at 1 pm in the heat of the day!!! I just loved it, I'd be warm and the run would come easily as did the sweat. ~laugh~

The Dogsled spun out of the parking lot on a mission as we headed north up Beatline to the Passport America office, today was also pay day for them and we left them some good old US dollars for the privilege of staying a few more nights here in the campground. They wished us safe travels and invited us back next year. Nice folks up there. 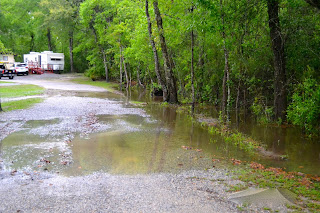 Back to the Igloo we realized it's definitely lunch time but I first headed next door to explain to Mac why we hadn't been at lunch. Well it wasn't actually to Mac's yard but to Mike and Miss Trish's yard where they were all standing around chatting. I of course just pulled up a bench and joined in. They are such a nice couple. Miss Trish is from the deep south and has such a wonderful accent and some interesting sayings as well as a way of saying things that you just don't find anywhere else. They are heading out tomorrow morning and we wish them safe travels, good tailwinds and sunny skies. Perhaps we'll meet them again in our future travels.

After that I really did come home and have some lunch. It was almost 3 pm before I finished. I spent the rest of the afternoon reading both inside and outside as it warmed up nicely, drying up a lot of the still water but not doing much to lower the depth of the flowing water. 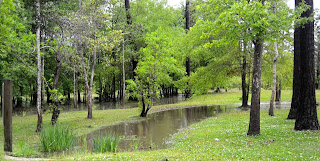 I heard Robert over at Mac's talking about the Wolfe River and moving up, river watch, etc. so I headed over to listen, it seems as if the river is at about 4.6 but dropped to 4' even. It seems they think it will rise again due to weather further north and west of us and they just want us to be aware that we may have to move, not that we have to yet. So something to keep in mind. When it reaches 8' it's time to move out. If that happens we'll just point our noses north.

Around 5:30 pm Billy hollered at me, they were up at the fire pit, no fire but just around the area. I headed up finding Mac, Billy & Charlene as well as Mr Bobby chatting in the circle. Some of the stories are priceless and I enjoy listening to them. Some people lead such an interesting life!!! ~laugh~Riley came along shortly after Mac departed and we all chatted a bit longer until the bugs started coming out. Magic the camp cat used both my lap and Riley's lap for quite some time while we were sitting there. 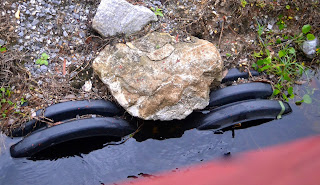 Home again Riley had left over pasta and I munched on a few Triscuit crackers as I wasn't too hungry having just finished lunch pretty late. After that it was back down to a game of Yahtzee. I know you can see my happy face and my happy dance. Yes, yes, yes I won again. ~laugh~ And I rolled a Yahtzee, of course so did Riley but I rolled mine FIRST. ~laugh~

After that I finished my book and then headed up here to edit pics, do the blog and check mail, face book, etc. So a busy type day, an enjoyable one as well. Thanks for stopping by, feel free to comment. Until next time..be safe, take care...