A coolish overnight that turned into an so-so morning but later in the day the sun warmed up the air to the point that a light jacket was the key to staying warm. Nice in the sunshine even with a bit of wind, but out of the sunshine in the wind wasn't nice at all. Can you guess where I stayed when outside? ~laugh~

This morning was a bit of cool one at first, we enjoyed the warmth of the propane heater and HRH(the cat) parked herself right in front of it and wouldn't budge. She was totally ticked when I shut it off. She huffed her way to the back of the couch and glared at me like I was the enemy. ~laugh~

We pointed our nose in the direction of Bativa for a few reasons this morning. One of them was diesel food for the Dogsled and at $2.53 per gallon we were happy to top up the bowl to almost heaping. I'm shuddering to think what a fill up will cost back in Ontario with such a big tank.

Back on the road we noticed the many blossoms that are showing on the trees in these small towns and along the ditches. I'm not sure what kind of trees they are but there are everywhere, the white blossoms almost look like cotton ball fuzz from a distance. We've also made note of the vast amounts of water laying in fields, but running fast enough in the ditches to cause white water rapids. The banks are threatening to over flow in some places and truthfully I can see how cars could be swept away by the fast moving water if the ditches are any indication. In some places it's sweeping debris from the sides of the rivers/ditches and causing log jams or pile ups around other trees or high spots in the river which then causes the water to spread out even further where it's not far from lapping the road. A very dangerous situation for anyone foolish enough to go near it.

Our time here in Le Roy hasn't been spent doing the things we normally do in a new area which is seeing some sights but today we did manage to see/photograph a few things in the area. According to local history the Jello Corporation used to have a plant in this little town and many locals worked at the Jello factory. The houses in the surrounding area are a snapshot in to the past. Factory towns historically have 'large' homes and for this little town the homes are truly wonderful. They are built in the true 'small town USA' sense with lots of porches and fancy windows, columns and banisters for hanging flags and  draping bunting, turrets, both round and square, as well as big front doors to welcome visitors. The houses aren't mansions but are large with lots of room for big families. Also dotting the streets are numerous churches of various denominations with massively impressive buildings often only a door or two down from a small sided structure but I'd be willing to bet the voices are just as strong and ringing in both buildings come Sunday. A few small local watering holes and restaurants of course fill in the rest of the spaces on these streets. Some newer more modern stores and signs of growth are evident as well but it just exudes the small town feeling. Le Roy has a Post Office, a liquor/wine store, a Tops Market, and a couple of other small stores but no Tim Horton's. It is truly a very warm, welcoming community. We've enjoyed our time here. 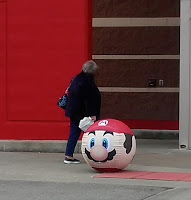 Arriving in Batavia we managed to find our way to something called Batavia Downs, (we didn't enter but noted the signs) according to the web it's a horse racing track with live betting on site. Odd place to have a horse track in the same area as many big box stores but then again, they've probably been built around the track due to the expanding city. After circling this new found area we ended up at a Target store for a quick peek around. Riley enjoyed seeing Super Mario and his cousin depicted on some kind of fabric over two of the red cement balls in front of the store. Some sound associated with this game kept sounding each time the doors opened which caused Riley to giggle at the look on my face as I tried to figure out why the alarm went off on our way INTO the store. She found it very amusing. ~laugh~

From Target we headed out to Wally World as we needed a couple of things. Always interesting to shop at Walmart, such a diverse and unique crowd find their way to these stores. I'm always fascinated by the 'normal' variety of consumer. ~laugh~ We still haven't managed to get a cheese pizza from Walmart in this area. Today was no exception.

From Wally's we stopped at a small shop on Main Street to browse through the wine selection. We managed to get a nice bottle for someone back in Ontario. Since it's a gift, I'll just say nothing else.
We stopped in Le Roy at another wine and liquor store where we managed to secure a bottle of Barcardi's Gold for my dad. They only had one left and we managed to grab it pretty quickly. We've been looking since we left Long Beach, (not too hard but looking) and this was the first 'gold' we found, lots of white or clear not few gold. Seems dad was fortunate today.


Back at the Igloo Riley put away the groceries while I headed down to the office to pay for a few more days and ask about getting my propane tanks topped up before I leave. Greg was using a wet vac trying to get some water out of the carpet in the office where it has once again flooded. He asked if I could come back later when Dave is back since it is a new system and Dave is more knowledge than he is, Dave will be back around 4 - 4:30 pm. Works for me.
Back home I enjoyed a large garden salad for lunch. I've been trying various new salad dressings and have found a Raspberry Vinaigrette that I like. It's not as good as Mike's Apple Pecan but it's still good. I've stashed a few bottles to bring home with me!!!
I spent most of the afternoon just reading. I enjoy my e-reader but sometimes find it a challenge to remember which way to flip the pages. The new hard cover I bought recently helps to keep it on the proper page when it's stored. I've found before that it seemed to flip pages on its on when I would accidentally bump the screen while turning off or on.
Around 4:15 or so I headed outside to disconnect the small propane tank from the heater, bringing it down to the filling station. Dave came by and got one of the bigger tanks (which was about half full) out of the spot and carried it down for me. He filled both of them, bleeding them of air as he filled them. Then inside to pay for the our final few days and propane, a quick chat with the fellas and thank them for all their help, their kind, caring and thoughtful gestures during our stay. I will definitely come back if I find myself in this area looking to stay for a day or two.
We pulled mild Italian sausages out for dinner tonight and I spent a bit of time finding a new recipe for dinner. Easy Smoked Sausage Skillet. It took no time at all to prepare or cook, it was good and we will definitely have it again but spice it up a bit with a few different veggies and perhaps pasta instead of rice. It was a simple recipe, sausage, rice, peppers, mushrooms, asparagus (it called for broccoli but I didn't have any), chicken broth, tomato sauce, garlic and onions. Add some cheese at the end. Good stuff.
A quick clean up and Riley headed off to her end of the Igloo. My dad called just as she headed off. Not much new on the Island but it sounds as if spring is making her way there, slowly but surely. Sounds like most other places with lots of water laying around and more coming. Hopefully it warms up in the next week so it actually feels like spring. ~laugh~


So that's our day, nothing earth shattering but we enjoyed it. Thanks for stopping by, feel free to leave a comment. Until next time...be safe, take care....
Posted by On a long and lonesome highway.... at Saturday, April 22, 2017