Birthday wishes, empty spot, and a visit to town....

I woke up this morning around 5:30 am but lazed around in bed until about 6:30 am. For some reason I just didn’t seem to want to shake myself out of bed. Oh well, can’t be a lazy sluggard all the time, now can one?


I slipped into my clothes, and running shoes, my fleece sweater and headed outside to catch the sunrise about 6:50 am. I caught the moon still high in the sky but in a totally different place than I caught it the other morning. That kind of surprised me, I thought it would be much lower in the sky and a bit more to the west, but there it was right up over top of the Igloo. The temp was reading 56F/13 C at that time.


I snapped a number of pictures and watched the sun start to brighten the eastern horizon. Not much, just hints and starts for a while. I settled down beside the Dogsled and proceeded to take pictures from just one angle today. Hmm….I’m not very good at that. Before long I was up moving around but sticking close to home.


I called my Aunt Shirley/Uncle Lyle this morning way back there in the great frozen tundra of Manitoulin Island. According to them it was snowing, almost blizzard like conditions and extremely cold. I of course, felt very sorry for them and offered up my sympathies. I don’t think they believed me for a minute but I was almost sincere. Truly I was. We discussed numerous things and caught up on a few other things. Their grandson Sheldon and girlfriend were home for the Christmas Holidays for 2 weeks and they had a wonderful visit. It’s been over a year since he was home last time. It sounds as if they all enjoyed their time together.


After hanging up I went inside and Miss Riley along with myself decided our day. We needed to make a trip to the dumpster and we needed to go into town to get some milk and a few other little items. I then proceeded to make some pancakes, which of course we enjoyed. That required dishes to be washed and put away. I know some folks use paper plates and cups but we don’t do that. I just can’t for some reason. I would rather have a real plate and  mug and just wash them. I have to wash the pots, pans and utensils anyway, so what’s a few more dishes.

After that little chore we started getting ready for our trip to town which included gathering up all the garbage, and putting a few things away outside before leaving. I had noticed our neighbour Jim’s truck home last night just as it turned dark and this morning noticed him piling things in the back of the truck. That was two full days he’d been away and I didn’t have a great feeling. I thought they would have been back home sooner if things had gone well. I slipped over for a quick chat and sure enough he was alone and packing up. Karen is still in the hospital in Las Vegas awaiting some more tests. Due to his insistence they continued to look for things and found some blockage issues and perhaps a collapsed artery. So Jim and Puma came back to pack up, dump and head to Las Vegas where after a few more days in hospital Karen will be released and then they will head home. I was sorry to hear the news but glad they had caught it early enough to help. I’m also sorry to see them go, it was a bit of comfort having them across the way, not that we met or chatted until need made it necessary but it was still comforting. Jim donated some wood for a campfire and gave me an email address, so I’ll keep in touch and send some pictures he’s requested. We wish them well, quick recovery and safe travels.


Back at the Igloo we loaded things in the Dogsled and headed off to town. We managed to hit the dumpsters which are in need of a dumping, dropped our cans to the side of the dumpsters, and then proceeded into the little village. Our first stop was a little market, I want to say Roadrunner but that might not be the right name, there we found some milk but not our other items. The cashier suggested Family Dollar or Dollar General. Just up the street there is a Family Dollar. We of course took the scenic route through some back streets and enjoyed the sights. Churches were just getting out and a few folks were out and about. Family Dollar found us exactly what we were looking for, an ear wax kit. Riley has issues with build up and today we needed to take an extra step to help out. From there we headed the Big Dog’s nose toward the Igloo and let him run. We were coming past the dump station and noticed Jim in line, a quick wave and we were swallowed up by the dust.


Almost back home we instead headed over to the spot Jim had just left and picked up the fire wood he donated to us. Thanks again Jim. Piled it in the box, turned around, scooted off home. I proceeded to get a few outside chores going but the wind was playing havoc with my hair, couldn’t keep it out of  my face. Too short for a pony tail and too windy for a hat. Not easy to see through hair strands wiping into your eyes. So I quickly finished up and headed inside. 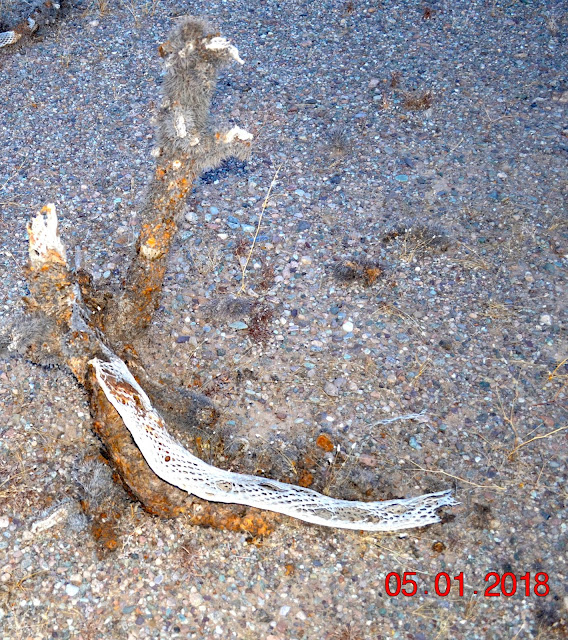 We attended to Riley’s ear and managed to ease some of her discomfort and hopefully tomorrow we’ll do a bit better. I think the lack of humidity has something to do with it. I think it makes the wax dry and brittle which causes pain at times, even with peroxide and oil it isn’t helping much. So we’ll try to flush it for a few days. She says it’s ‘kind of better’. So I’m taking that as a good sign.


While I sat and read outside for a bit, Riley worked inside making lunch. As it’s Sunday it’s her turn to cook anyway. Today is Spaghetti lunch. Salads made, she jazzed up the sauce, and made cheesy garlic bread as well. It smelled excellent and tasted just as good. Sorry no pics.


After that I alternated between outside reading, inside reading and laying on my bed reading. I finished a book and started another although I’m not sure this one will be a good read. I’ll just keep plugging away for a few more chapters and see.


Then outside to catch the sunset except with all the cloud cover there wasn’t any sunset. Oh well, there will be more in the future and we’ll take it. Today’s temps reached about the 80F/ 26C by mid afternoon. As I write this post at 6:45 pm the outside temp reads 61F/ 16 C. We even slept with vents open last night. I will admit I found it too warm with my fleece jammies on.


A quick birthday wish to a couple of folks we know. First Happy Birthday to Buzz Sawyer, whom we know from Magic River Campground in Long Beach, Mississippi. Buzz is a wonderful man, with quick humour and a ready smile. He’s special in so many ways, and we’re fortunate to call him our friend.


Second to my cuz Sheila. She and I are the same age, although as you can guess she is older by a number of months. Sheila is a wonderful teacher with Kindergarten and Junior Kindergarten being her calling. She is a mother and grandmother, is creative and has a zest for many things. Happy Birthday Sheila.


After coming inside I edited pictures and wrote this post. So there you have it. Our day here in Quartzsite, Arizona. Nothing too exciting but we enjoyed it just the same. I think tomorrow we’ll maybe  head out and see if we can stay out of trouble but find something to entertain us a bit.


Thanks for stopping by, feel free to leave a comment.