A very accomplishing kind of day....

I woke for the first time shortly after 2 am to the sound of a half dozen coyotes yapping just outside our little Igloo. I’m willing to bet that if I’d gotten up and looked out the window I might have been able to see at least one or two of them. However I didn’t, I simply rolled over and went back to sleep, after a trip to the ladies room of course.

As I write the beginning of this post it is 5:09 am and not a sound can be heard except the tap, tap, tap of the computer keys, and of course HRH Miss Kitty at her food bowl. She has heard me stirring up stairs and wants me to know that she expects breakfast as soon as I’m down stairs, or perhaps sooner if possible.

At some point today or Monday we’ll be heading out to Blythe, California as that seems to be where the nearest blood lab is, or at least the nearest one I could find. Before we started full-timing I was required to have blood work every month, I’ve since convinced  the good doctor that once every two months is more reasonable as I have to pay for it myself down here in the USA. Of course him being the good doctor that he is, agreed to the two months. I tried for 3 months but he wouldn’t go that far. So I had my last work completed just the day before we left Ontario back in late October. I’ll have it done once more before I get back to Ontario where I don’t have to pay for it.


Outside by shortly before 7 am, the sky was still dark, the moon bright and a few stars twinkling merrily as they prepared to fade away in the upcoming daylight. Warmer this morning, 48F/8.8C with no wind of any kind. Truly a wonderful morning.


I called my sister while I was snapping pics of the sunrise, we chatted for about an hour and in that time I had more than enough pictures of the sunrise to do for my blog. We chatted about numerous things and caught up on a few other things.


While chatting with my sister Jan, and snapping pictures of the sunrise, my neighbour Jim stopped and told me that he was off to pick up his wife Karen today. Determined to be nothing more than low blood sugar they are releasing her. I’m assuming it was from Las Vegas but I don’t know that for certain. As I’m writing this post at 7 pm they still haven’t arrived back home. 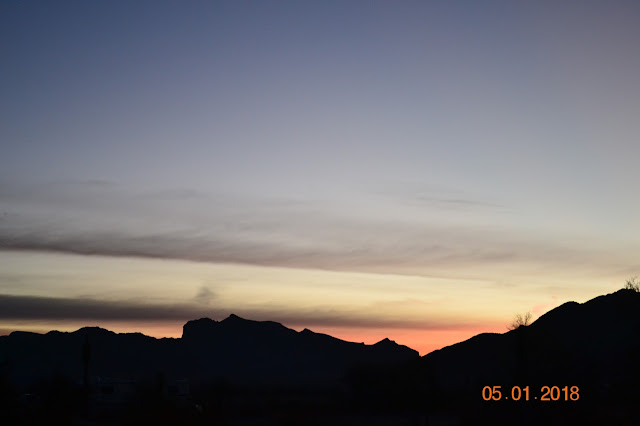 After finishing up the call to Jan, and the sun being up I headed inside to chat with Miss Riley about the up coming day. Over hot drinks we discussed a few things and decided I would go by myself to Blythe for the blood work and she would stay home. Any walking would be done on the road and not venturing any cross country, a text to me when she was leaving and when she returned was also part of the requests. 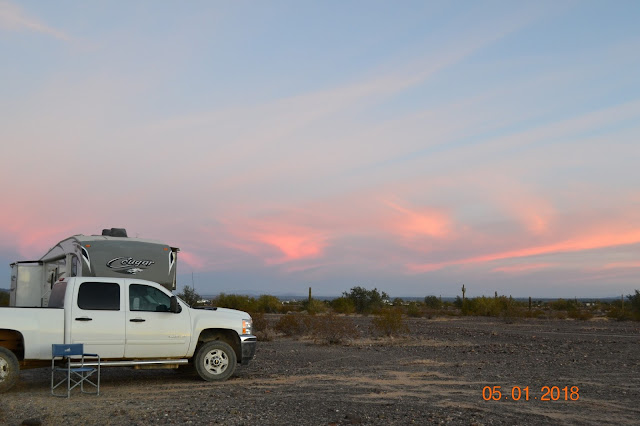 I prepped lunch, made our salads and cleaned up the kitchen while finishing up my hot drink. Nothing like having that out of the way. I’ve also checked on the list of things we cannot bring into California and so we’ll not be grocery shopping until we cross into California during the up coming week. 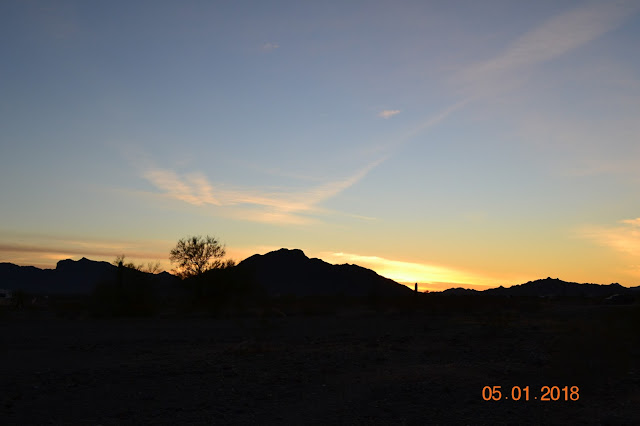 So I headed off to California around 9 am MST, toting the garbage to the dumpsters on my way out. The ride was pretty, quite and uneventful, just the kind I like. I found Lab Corp with no issues. I won’t tell you all about the experience but let’s say that an hour and a half later I had finally had my two vials of blood taken, paid my bill and left.

I stopped at a car wash just off of E Hobson Way and gave the Dogsled a decent bath. I wasn’t too worried about getting  it spotless, more just so I could see out the windows. The Big Dog is shining like a new penny. He also has a full belly, which I topped up just before crossing into California at $2.69 per gallon. This for the Canadians that have trouble not having a zip code when paying at the pumps with a credit card, try using the 3 numerical digits from your postal code, followed by two zeros. Example: L8K 3K1 would then punched in as 83100. It’s worked at the last three pumps I’ve tried.


Leaving Blythe I headed out on  I-10 East and just let the Big Dog run along at a nice steady pace. Riley sent a text message saying she was going for a walk (I pulled into a rest stop to check the message, not while I was driving). I literally pulled back on to the Interstate and my phone rang, my friend Linda was calling. I let if go to voice message and called her when I pulled into the BLM area and chatted while I drove home from the check in cabin. I also passed Riley about 2 minutes from home just a speeding down the dusty road with little tufts of dust kicking up around her feet. Reminded me of that guy on Charlie Brown that is always walking around with dust about him.

After having chatted with Linda for about an hour and Riley having made it home it was about 1:15 pm when I pulled my salad out of the fridge to start enjoying my lunch, as I was hungry. The salad hit the spot but left me hungry enough to enjoy my lunch about an hour later. Today I worked the Weber as it was too hot for Riley outside, even under the awning. I didn’t mind, it was nice sitting outside and soaking up some rays while reading my book. It took only occasional effort from me to turn things on the grill. 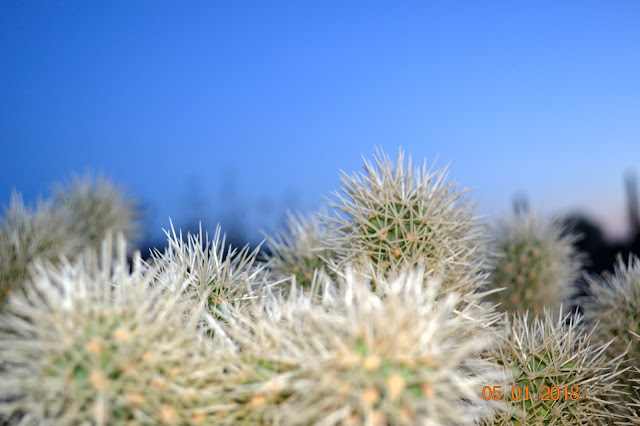 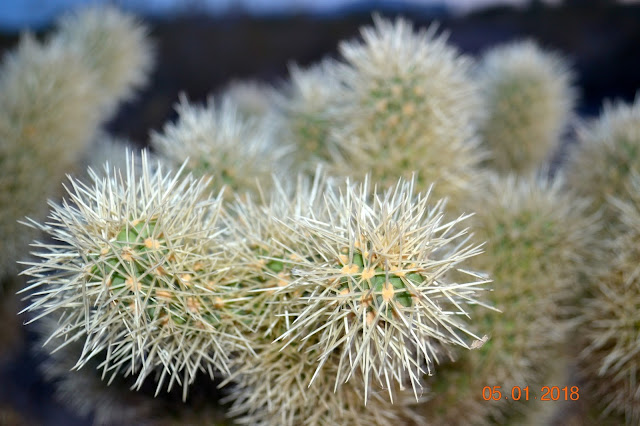 Today’s lunch was of course a nice green salad (actually multicolored), followed by mixed veggies with Sweet Basil, and Parsley (fresh mushrooms, asparagus, carrots, cauliflower, spaghetti squash, celery)  We also had grilled potato wedges brushed with oil and to those I also added a little Parm cheese to the tops of the wedges. Lastly I dropped a sweet country Ham steak on the grill. I can tell you it was very good and we have no left overs. Riley finished off her meal with some peaches, I choose to have a Granny Smith apple instead.

After cleaning up inside and out, I grabbed a stool, a towel, keys and the drill. Once again I pulled everything out of the side cubbie, crawled in, removed the panel and had Riley turn on the water pump. I adjusted the check valve that Bill Richards, (On Our Way) mentioned a few days ago, and sure enough, it shut off. Thanks again Bill. Afterward I put everything back in the cubby and sat down to read my book for a while. 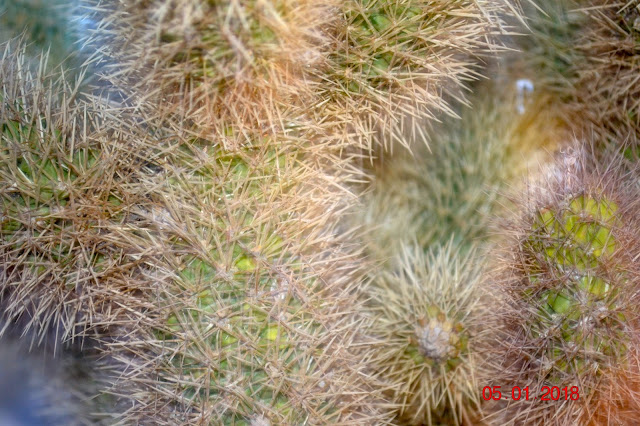 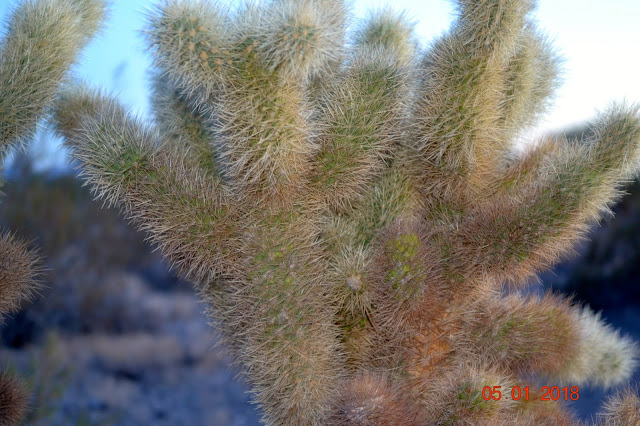 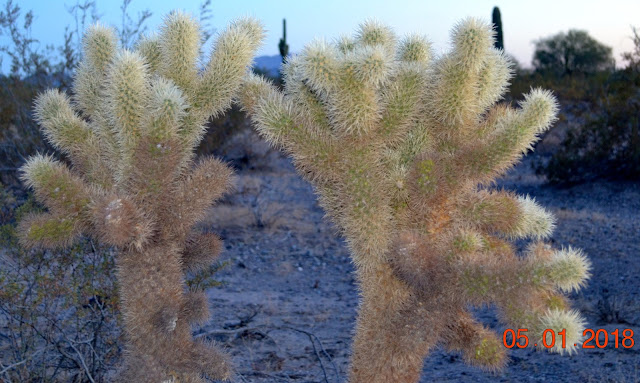 Around 5 pm I was inside just getting things together so I could slip out and take sunset pictures when my Dad called from Manitoulin Island. My Dad’s name is Doug. For those that that don’t know I’ll give you a little information about the Island. Manitoulin Island is located in Northern Ontario in the Georgian Bay/La Cloche/Killarney  area of Lake Huron. There are two ways to get on or off the Island from late April to mid October, but from October to April there is only one way on and off. During the summer months one can use the ferry from South Baymouth on the south western tip of the Island to Tobermory on the mainland, which is 27 miles away. The ferry schedule is 2, 3, and 4 trips depending on time of season and day. The ferry is called the Chi-Cheemaun which means Big Canoe in Ojibway.  The other alternative is Hwy 6 which crosses a single lane swing bridge at the northwest end of the Island at the town of Little Current. The swing bridge stops traffic during the summer months usually every hour on the top of the hour to allow marine traffic to pass into/out of the North Channel at the town of Little Current.


Among the news my dad shared was numerous accidents on various highways in the north which claimed a number of lives  over the past few days. We chatted about the weather, the temps, updates on this and that and before I knew it 20 minutes had passed. Dad had lots of news today.


After hanging up the phone I slipped outside and started taking pictures. I walked around and took pictures from a number of angles and locations. Wasn’t an extraordinary sunset but it was nice. I was back inside around 6:30 pm to chat with Riley for a bit before starting to write this post and I still have to edit the pictures taken today.


So there you have it, our day. I managed to accomplish the three things I wanted to do today, blood work, bath the Dogsled, and check the check valve. I didn’t get out for a walk, it was just too hot when I got home but tomorrow I plan on having a good long walk. Thanks for stopping by, feel free to leave a comment.