I was worried I wouldn’t be able to get to sleep last night after sleeping for over an hour and a half yesterday in the late afternoon but by 10 pm I was drifting off with the sandman to the land of nod. I woke once for a nature call, didn’t check the time, and woke again at 5:30 am knowing then I was up for the day.

I know to catch the first signs of the sun coming I’ll have to be outside by 6 am here but I think I’ll wait until a more decent time of at least 6:30 am before stepping outside.

We have plans today to go to Indian Wells to visit Janet & Dennis, which we are looking forward to doing. We visited for only a little while shortly after Canadian Thanksgiving last year in Roseneath, Ontario. While this visit will be short as well, it’s nice to catch up and hopefully perhaps we can do it again in the spring. However they usually arrive  back in Ontario well into May and we will be back at our summer location by that time.

She sent directions a few days ago and will leave our name with the gate so hopefully we’ll have no troubles getting in. They have been renting the same house out here for a number of years. Janet wanted us to stay over for the night and while we could it just seems nicer to come back home and sleep in our own beds, and not to leave HRH Miss Kitty alone for quite that long. I know she would be fine as we have done it before. She was quite miffed when we got home and it was funny to see how she wanted to be  around but not close enough to touch, but also wanted to be aloof and snooty. Anyway, it’s only about 40 minutes away so we’ll be coming home in the afternoon some time.


I caught the sunrise this morning, it was pretty nice but I didn’t wait for the last seconds to catch the sun popping over. We enjoyed our hot drinks and biscuits for breakfast, courtesy of Chef Riley. Thanks Riley. After that it was a matter of opening some vents, windows and putting out lots of water for HRH Miss Kitty before we headed off into the land of the hustle and bustle.

We left shortly before 9 am and literally fell onto I-10 West at the bottom of the hill here, we stopped at the rest area and then on into Love’s truck stop for a few minutes. A hazy sky kept the sun at bay as it turns out for most of the day. We found our way to HWY 111 and the guard house, we received our dashboard pass and continued on Manitou Drive. It’s immediately apparent that we are in a very nice area. Green grass is very abundant, as are colorful flowers, flowering bushes, stately palms and magnificent houses. A large pond with a shooting fountain caught our attention as we passed thru the streets. We had no trouble finding our way and before long were arriving at their door. We were much closer than Janet thought, as she thought we were coming from the north side of Joshua Tree N.P.


We spent some time admiring the view as their rental home is on the 12th fairway with a very large straight up rock formation behind them. The grass is extremely green, and lush. We enjoyed a coffee on the patio and watching a golf cart or two head down the way. As we were sitting there Janet mentioned that Billy was down the way at the edge of the green. Billy is a Big Horn sheep that lives on their side of the ‘mountain’. He’s the only one, and has been there at least 5 years. He comes down to enjoy the lush green grass. I found him very hard to see at first but we soon walked down to the corner where he was happily munching on the grass. As we neared he headed up the hill and stopped for a photo shoot. Billy has only one horn. The other one appears to have been broken off. Billy is no longer a young sheep, but a very light colour, which according to Janet the lighter the colour the older the sheep.


We picked a fresh lemon right off the tree as we strolled along back to Janet’s. We chatted with Dennis for a bit, before Riley, Janet and I climbed into her car and headed out for a while. We first went to an authentic Mexican restaurant where we enjoyed our first truly authentic Mexican food. We enjoyed it very much, chatting away and tasting a few different things. The little place is by the tracks and as the train went past the place was just shaking. It’s a small place but was full in no time as the lunch hour approached. A fun time. As we were leaving we were getting some pictures (Janet will send me some from her phone) we happened to see four gents standing outside and we all cozied up for a picture. How funny is it that I’m standing there with my arm around the owner’s husband? We all had a good laugh and truly enjoyed the visit.

From there we headed down into the shopping area which was pretty ritzy including stores like Sac’s, Tiffany’s, and so on. Very lovely area with amazing gardens and sights to see. We actually strolled around a small art store that was very pricey but some interesting things to see.

From there we headed on a driving tour for a bit, past the famous Indian Wells Tennis Tournament location, past a few other golf courses, and some interesting sites as well. We managed to find a Trader Joe’s where we purchased a few things but not much.

It was back to Janet’s for a bit to sit and chatter some more and as we were leaving Riley picked 4 fresh pink grapefruit from Janet’s front yard. In the Dogsled by 4 pm, we were home before 5 pm where we met and chatted with John our neighbour across from us. He informed us it’s been hazy all day here as well. 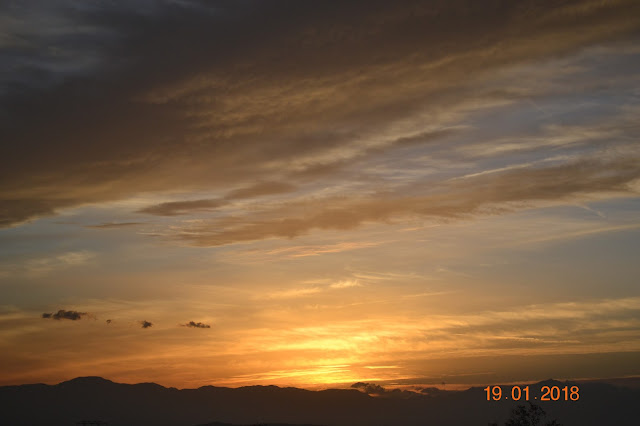 I was amazed at the sunset tonight, the pictures are fantastic. Inside to edit and post, then I’m heading to bed. I’m tired. 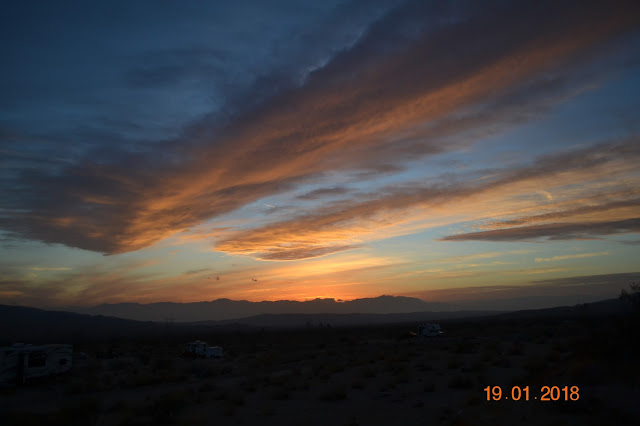 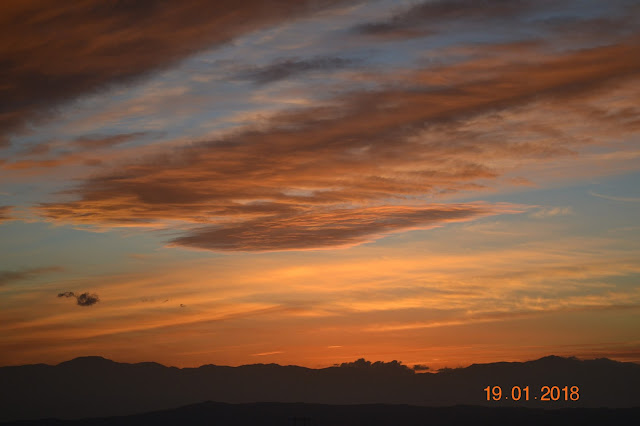 An excellent day, and we enjoyed it a great deal. We may stay a bit longer and visit again but that’s something for us to decide another day. Tomorrow I think we’ll head into the park and have a look around.

So there you have it, our day at Indian Wells with family. We truly enjoyed ourselves and had a great time. We enjoyed the time spent with Janet and the tour. Thanks so much Janet.
We hope you’ve enjoyed your day as well. Thanks for stopping by, feel free to leave a comment.