A restless night for me. I couldn’t seem to stay awake but I couldn’t seem to fall asleep either. More like catnapping all night long. I’ve noticed a light outside my window off to the south, but I have no idea what it might be. I don’t recall seeing any thing over in that area. Perhaps a walk in that direction will clear up my curiosity. We shall see what the morning brings.


It is now 3 am and I’ve been napping off and on but feel that I may now be awake for the duration. However I can always hope can’t I?


Well Riley woke me at 7:30 am by calling my name from the bottom of the steps. She’s not used to me being inside, never mind in bed at that hour. She used reasonable deduction skills to know I hadn’t left the Igloo. My shoes, the camera, and my sweater were all still in their places. The door was still locked and my bed was a mess. I always make my bed first thing upon getting up. Also the mugs, kettle, etc were not out waiting for someone to make a hot drink. Pretty smart chickie that Riley girl!!!


I missed the sunrise but I’m  not convinced there was one that was worthy of pictures anyway. A lot of cloud cover this morning. I stumbled downstairs and we enjoyed a hot drink and chatted about what we wanted to do today. We had to get a few groceries as the fridge was looking a bit like Mother Hubbard’s cupboard. We also had to make a trip to the dumpsters for a deposit and we had a bit of an errand to do.


After getting ourselves cleaned up, motivated, and out the door, we still had to remove the wood from the truck that Jim gifted to us the other day. We needed to load some water bottles in the Dogsled as well as some garbage. I remembered the short piece of water hose to attach to the spigots at the water station. Much easier with the hose. I’m amazed that the water is warm coming out of the spigots. I know that hot springs are in located in the southwest but it’s just something that I find hard to comprehend. Hot water coming from the ground.


We made our deposit to the dumpsters, stopped at the Check - In cabin to ask a quick question but the answer wasn’t what I was hoping for. One cannot just pay for a week, it’s two weeks or 6 months. You can of course pay for two weeks and stay for one if you like but I’m not going to do that. Anyway, we have the solution already decided.

Off we headed to the growing village of Quartzsite stopping at The Road Runner Market, as well as The General Store. We didn’t get all of the groceries on our list but we got most of them. The prices were actually pretty good but we didn’t buy any meat of any kind. I found a few things to be very expensive but over all, pretty good. I just glanced at a few meat products we would normally buy but found them to be much more than I would happy paying. Since we’re well stocked though I wasn’t too concerned.


We headed back to the Igloo, or at  least in that general direction. We were looking for our friends George and Suzie (Our Awesome Travels), and of course next to them would be friends Bill(On Our Way) and Patsy (Chillin’ with Patsy) Richards, that we haven’t met yet. We had noticed a rig that I was pretty certain was the Suite, but I didn’t see any motor home around that looked like George and Suzie’s. So we thought perhaps we’d best keep looking. True to my native blood, I circled this rig a couple of times, just checking it out, finally deciding that the fella I noticed watching us looked a lot like Bill. So we turned the Big Dog toward this big rig and as we approached we could see Bill and Patsy leaning on the back of Black Beauty watching us country bumpkins circling them. I’m sure they must have thought we were casing the joint. However big waves assured me that it was possible they didn’t think us odd for circling a few times. Hugs, handshakes and hellos were exchanged and I explained I had been looking for G & S’s motor home but didn’t see it and so wasn’t sure about the Suite. It was explained they were out for a bit and had taken both the car and the motor home. Riley, Patsy, Bill and I sat down and chatted like we’d known each other for a while. Clemson made an appearance as well. The warm welcome made us feel very comfortable and I noticed that Riley was much more relaxed than usual when meeting new people. I was very impressed, she doesn’t do that often.


We sat and chatted for a bit before George and Suzie pulled in next door. Greetings all around and we all chatted for some time. It was very comfortable and we enjoyed it a great deal. Truly nice folks and we are both very happy to have finally met Bill and Patsy. We climbed into the Dogsled and headed home  as we were pushing the noon hour and we had a few things to do before lunch.


Lunch was excellent again to day. I know I say that all the time but well, if it wasn’t excellent we wouldn’t bother to tell you about it, now would we? Since I had prepped lunch before we left,  we enjoyed our salads while the Weber was heating up. I tossed the veggies onto the grill, letting them cook while I read my book. I eventually tossed the chicken breast onto the grill as well. We were eating around 1:30 pm today. Lunch was of course our salads, today we used home made Thousand Island dressings. We had a mixed veggie medley of asparagus, mushrooms, celery, and carrots, along with some sweet Basil, and Parsley, topped that with a wee hint of Parm Cheese. In a separate packet I did part of a Spaghetti Squash with butter, the same spices as above, and some Parm Cheese, but also added some cauliflower in the small ‘bowl’ of the squash, topped that with a bit of cheese as well. The chicken breast I brushed with Dijon Mustard for the last few minutes on the grill. Flipped it over and did the other side as well. Not too long, as it will burn quickly. That was lunch!


A quick clean up, we grabbed our sticks and headed off cross country carrying our water bottles but no chairs, as it was too far for that. We headed back to spend happy hour with our friends the Yates' and the Richard’s. We arrived to find Debbie and Tom (Celebrating the Dance) who’s blog I haven’t followed but will be checking into it in the next few days, also there enjoying the company of these two wonderful couples. We chatted briefly before they headed off on their way. Sitting and enjoying the company we chatted, laughed and harassed way through happy hour. Truly an enjoyable time for Riley and I. Thank you for including us and making us feel so welcome. However all good things must come to an end and before long we had grabbed our sticks and headed homeward. Can you believe I didn’t take any pictures of this gathering? I had my phone in my back pocket and just didn’t think of it until we were almost back home.


The temps were cooling off and I wanted to get home in time to take some sunset pictures. Which of course we managed. We skirted the ‘Magic Circle’ area which is clothing optional, and I will admit, I noticed a fellow that had exercised his option. We hurried along and before long we were home with time to spare. Didn’t take us as long to get home as I thought it would. Riley headed inside and I have no idea what she was doing, as I stayed outside doing a few little chores and eventually taking sunset pictures.


As the sun was setting and I was heading back toward the Igloo I noticed Riley outside, she doesn’t normally come outside for sunsets until later. She mentioned that she hadn’t heard me making any noise outside and since I hadn’t come inside, she came out to check on me. How sweet is that?  As usual I move around when I take pictures and since I had finished my chores I just assumed she would know that I was outside doing what I do every night. However next time I will be certain to tell her before I wander off.  She was looking at the donated wood and I explained how to make a fire ring, helped her pick a place to locate the fire ring, and even drew a circle on the ground to indicate where the rocks should be placed. She started placing them but I could tell that if I left her to do it she wouldn’t complete it. I have no idea why not, but it’s just something I could tell. So I helped out, setting the camera aside and only occasionally taking a picture. Before long we  had a ring built and she headed inside to get some paper to help start the fire. In the mean time I had laid out the wood, told her where to stuff the paper, and before long we had a nice little fire from Jim’s donated wood. It’s extremely dry hardwood and gives off a nice heat. Even burns a wee bit blue in a few places. 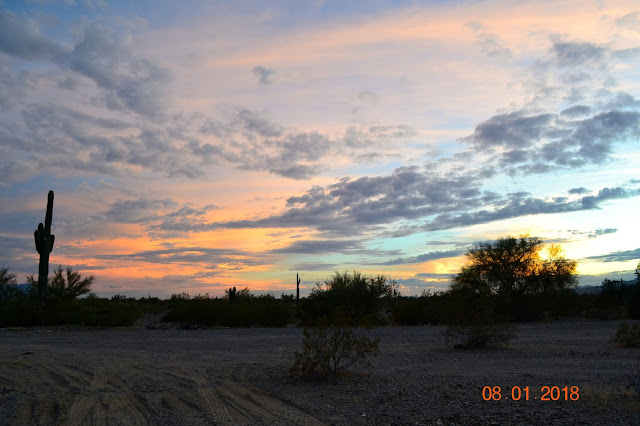 As we sat around the fire chatting Riley told me she had an excellent time at happy hour, and during our earlier meeting with Bill and Patsy. She isn’t usually so easily settled and I’ve seen it only a few times before. She told me she even enjoyed the cross country walk there and back again. So from my point of view we’ve had a most excellent day!! 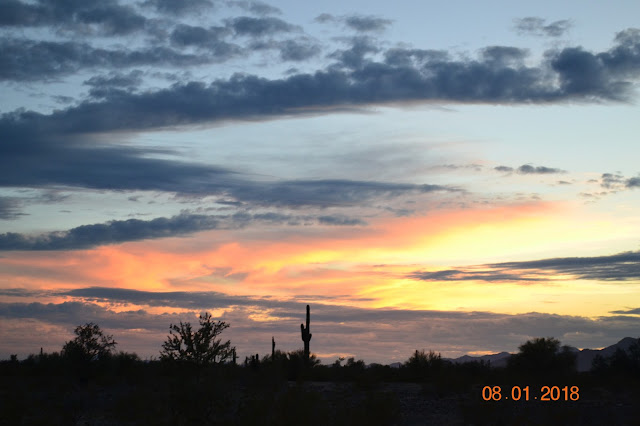 After about an hour the fire died down and we came inside. We enjoyed the stars above, no moon that I noticed though. A warm night for certain so far anyway, although the Igloo was cool when we came inside since the windows were still open. It didn’t take long to warm up just by closing the windows.


Miss Riley is off doing her thing, pretty silently tonight. I am editing pictures, and writing this post, after that I’ll get into my jammies and either read or play a few games on  my iPad before bed.


So there you have it, our excellent day. We truly enjoyed it, and look forward to perhaps sharing some more time with these nice folks over the next weeks or months while here in Quartzsite. 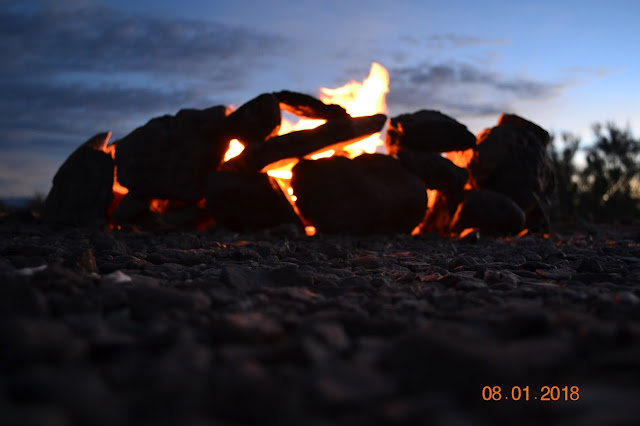 Thanks for stopping by, hope you had an excellent day as well. Please feel free to leave a comment, they are appreciated. 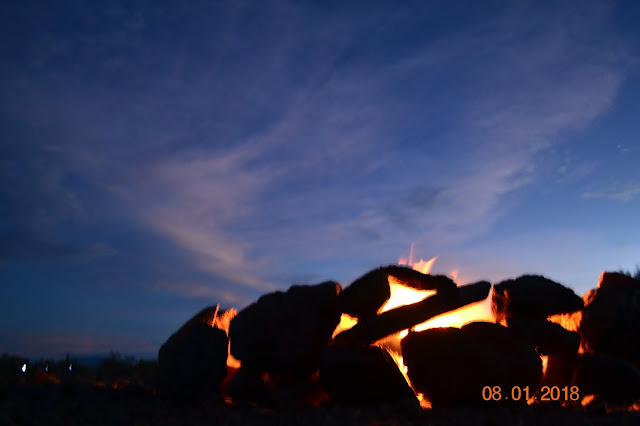