Another wonderful night for sleeping with the windows open. Today was very humid and warm but not so much sun as one would expect. Still a very nice day.

This morning started with trying to find a place to have some blood work done. I found labs in many states while researching on the net before coming south, but I don't know if I just didn't look in the state of Georgia or more specifically the town of Albany. It's very difficult to find one here. I've ask a few people in the park and they gave me various ideas but none of them worked. I asked a couple of pharmacies as well, nothing they gave me worked out. However I think I've finally found a place, more on this later.

Leaving the Igloo to do a number of errands including the one just mentioned we started off by stopping at RSG for our walk again. Lots of traffic around the roads and a number of people using the walking path, in fact more using this path than the walking path along the Flint River. 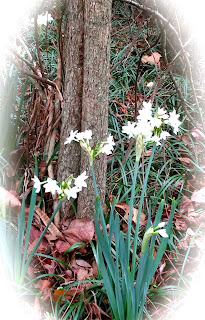 We noticed this splash of green and white as we walked today. They look like Daff stems and greenery but the flowers are definitely not Daff's that we see in Ontario, Canada.

I played around with my iPhoto a bit tonight on a few of these pictures. Thought it would add a different look than just the plain pictures. 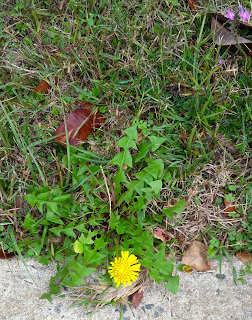 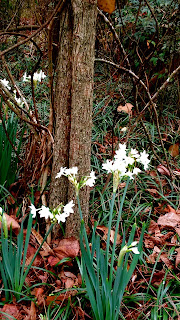 More of the same flowers as above and the first dandelion of the season.  Seems kind of early to me as it's only Dec 27 but dandelions don't lie. ~laugh~ It must be spring!!!

After our walk we headed off in search of a blood clinic/lab, stopping at the Clinic near Oakridge Drive as two people were pretty certain we could get blood work accomplished there. Wrong, it's a dialysis clinic, and they had no idea where we could go for blood work.  Leaving there we headed on out toward our next errand keeping an eye open for a dr's office, or a pharmacy. 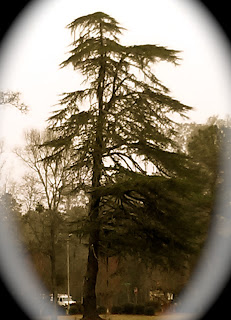 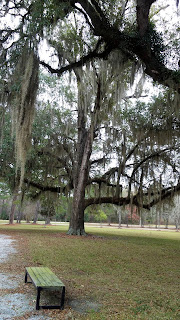 We stopped at a pharmacy, they weren't of much help but did offer a Dr's name that might be able to help me, and 'some place on 4th avenue' as another possibility.

We continued on to Home Depot, our next stop on the list. I was looking for some more lights for the Igloo. I've been trying different LED's and I think I've found what we will be using. We bought 6 of these lights at H.D. to put in various sockets to try them out for brightness, tightness, and longevity. Not all of these lights will fit well in the light sockets, for various reasons. 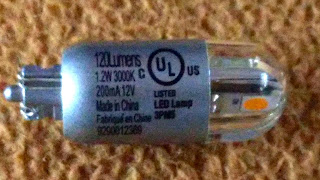 This is the light we bought. It is equal to an 18 w light but it's only a 1.2 watt. It's pretty bright, and isn't white, which is a good thing, the white lights are hard to use, or at least for me they are. The only problem with this one is that it doesn't seem to fit tightly enough in the socket, that may be because I'm not pushing hard enough but I'm always afraid they will break in my hand.

After H.D. we scooted down to Ledo Road to the local gas bar as the Dogsled was getting thirsty. $2.32 per gallon here today for diesel, which I think was pretty good. Riley is so proud of herself, she pumped the fuel today. I paid, but she pumped. ~laugh~  After the pumping experience we went into Wally's World for a quick couple of things and came out much lighter in the wallet but heavier in the basket than intended. ~laugh~ We eat a lot of fruits and veggies and that stuff is not cheap.

After that it was home to the Igloo. We put away the groceries and I installed ONE light to test it out, I'll do more tomorrow. I put up a new blind in Riley's bathroom. Finally remembered I have two cordless drills in the cubbie, do you think I should use one of them to install this blind instead of hand cranking like I did on the last one? Some days I am sooooooo blonde. ~laugh~

After that it was a matter of going thru the things we've put aside to take home, and pack a gift basket to figure out how much more we need to get. While doing this I figured since I'm already working with stuff under bed I should just clean that out, and in so doing managed to clear up some space by putting some unused things down in the basement. (outside compartments). 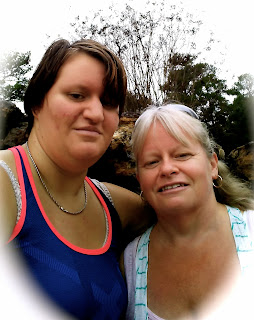 That finished up it was time to dye Riley's hair with an Intense Purple colour. Not seen in the picture above. It was looking pretty pinky in the bottle, she was pretty worried. ~laugh~ After I finished my part of that duty I decided at 3:30 pm it was time to have some lunch as I hadn't eaten since breakfast.

Lunch finished for me (Riley had eaten when we first returned home) I went online to find a blood clinic. I found one and chatted with a person on the other end that assured me a Canadian Req form would be no issue. So either tomorrow or Thursday I'll be going there to have some blood work done. I also got the address for one in Long Beach/Gulfport area that I'll need when I'm there.

Riley BBQ'd dinner tonight, veggies with oregano and thyme, potatoes with garlic and onions, along with mild Italian sausages. She did an excellent job!!! I read my book while she cooked dinner, lazy thing that I am. ~laugh~

Cleaned up after dinner, called my brother's house, chatted with Sister in law for a while, getting all the latest news that I've missed while being down here.

End of another great day. Nothing too exciting but busy and full. Someone asked me once, "What do you do all day?" Truthfully, I'm not really sure but the days seem to be over before I know it. ~laugh~

Thanks for stopping by, I hope you've enjoyed your visit. Feel free to leave a comment. Until next time...be safe, take care......