A warm night, followed by an overcast day that was also warm with high humidity, a bit of sun and tonight some heavy rain complete with thunder and lightning. No white stuff though. ~laugh~ Tonight is going to be warm as well with no need for any kind of heat and maybe having to crack a window open just a bit. Rain is still falling but the thunder seems to have stopped.

Our day started off around 7 am, dressed in short pants and short sleeves. A quick breakfast and a  bit of tidying up and we were headed out the door shortly after 8:15 a.m. climbing into the truck to head downtown to the Riverwalk again. We like that area and since we were heading in that direction anyway it seemed logical to include the Riverwalk. 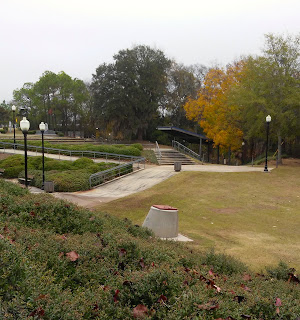 This is the open air amphitheater at the beginning of the Riverwalk. It's very pretty and backs onto the Flint River. I'm certain when the weather is warmer there are many flowers and flowering shrubs here which would make this place very inviting to sit and enjoy entertainment on a hot summer's eve. Along the far top left of that green space there are a number of war memorials listing the causalities from the area of Albany, GA. There are memorials for WWI, WWII, Vietnam, Korea and the Gulf War, the latter having had only one casualty from this area. 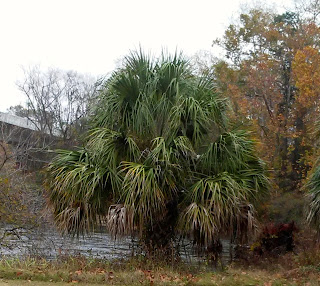 This palm tree is growing along the banks of the Flint River and looks odd as we don't normally see palm trees just growing here and there. There are a number of smaller ones in the area also. This is different than the palm trees we normally see as they are much taller and only have branches at or near the top. I wonder if these are native or transplants? 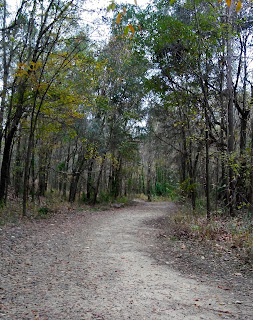 This is labelled as Nature Trail Loop off of the Riverwalk and today we actually decided to check it out. It is a very scenic walk thru the marshy area of the Flint River, great for bird watching as they have a number of observation platforms along the trail.  It kind of meanders along thru some very 'bayou' like areas. The path is not as smooth as I expected but it was still very nice. 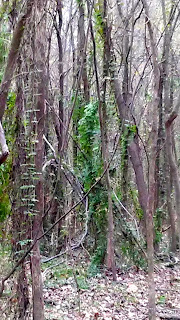 On the Nature Trail Loop we noticed this green vine growing pretty much everywhere, almost taking over many of the tree trunks. I'm not sure what it is but it's extremely green and has lots of leaves and clings to living and dead trees alike. 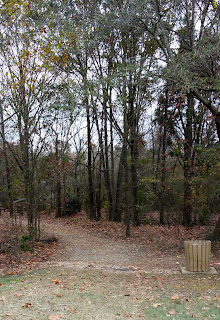 This is the end of the Nature Trail Loop where it joins back up to the Riverwalk's cement walkway. As you can see there are a number of trash containers along this end of the park. There is little to NO garbage along the trail that we could see. Many of the trees are still green and tons of acorns are falling all the time from the Living Oaks. 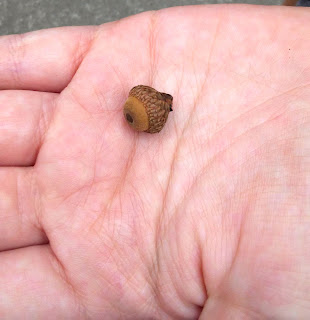 This is an acorn from one of the many Living Oaks that spread their limbs over the Riverwalk pathway. Riley is holding it in her hand to give you an idea of how small they are. You can see where they've been stepped on, crushed and leave behind a small powdery spot on the walk way. Not nearly as big as the acorns we're used to seeing. 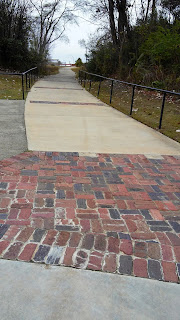 At the end of our walk we pass this side trail which leads to the History Museum and the Planetarium which we will visit later this week as they are only open Thursday - Saturday. The bricks are used  and I believe come from some of the old buildings that have been torn down in the area. Many have some writing chiseled into them. This inset of bricks continues all the way up the hill you see there and along the sidewalk for about the length of two city blocks until you arrive at the street which has both the Planetarium and Museum. The street is also made of old bricks with a partial train track running thru the middle as a 'yellow' line sort of thing. They have also used a few pieces of steel rail to inlay a design in the sidewalk. I'll get a picture of it next time I'm there.

From our walk we headed out to do some shopping. A quick stop at Lowe's netted us a few things that we've been trying to track down for a while and finally managed to find them today. We're heading back tomorrow to pick up my Christmas present as it was on the truck due in tonight around 5 pm.

After that it was off to find a local pizza place called Picnic Pizza which has the best pizza!! It was across the parking lot. I knew it was in the area from a previous visit a couple of years ago but we needed the GPS to find it. ~laugh~ We'll stop by for pizza before we leave the area.

A quick stop at the Dollar Tree to pick up some baggies, tinfoil, and some 'chore' clothes that were needed back at the Igloo as mine seems to have disappeared. I keep losing things and can't find them. I swear something is eating them. ~laugh~

A stop at Walmart was next on the list for some much needed groceries. We were running low on veggies and we do eat a lot of them. BBQ some pretty much every night and on those rainy or cold nights we steam them, so running out is not an option.

Home by 2 pm, we had some lunch and a bit of reading as it was still overcast but a nice day to have the big door open. We started playing Yahtzee but noticed Lenny heading across the grass to our front door, so putting the game aside for a bit while Lenny and I discussed the solar system I want to have installed on the roof to help us during the summer months when we dry camp. It was quite a lively discussion, Lenny is 79 years old and still climbing up on the rooftops to install this stuff. He's a real character.  After Lenny left Riley and I finished our game of Yahtzee with Riley now leading by a score of 9 games to my 4. I think she cheats. ~laugh~

Around 6:30 pm I started grilling our veggies and potatoes and noticed a few little drops of rain, nothing major just a few drops. I asked Riley to put the awning out and just in time as it really started coming down. As you can see in this picture it's pouring off the end of the awning arm.  The lights in the background are coming from the campground office and the street light behind it. That line you can see in the middle/right side is the rain pouring off the arm of the awning. It's literally coming down both front and back of the arm forming one long stream of water. 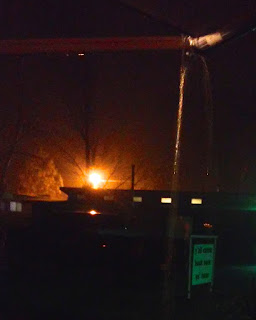 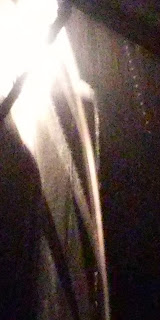 This pic is hard to make out but that is the water spewing out of the downspout at the front of the trailer. It's coming almost straight out of the spout it's coming down so hard.

By the time I added the loin chops to the BBQ it was starting to blow in under the awning as well. I was happy to be finished pretty quick. We finally shut the big door about 8:00 pm as the wind was starting to push the water under the awning again and into the screen. As I write this now at just after 9:30 pm  the rain comes and goes at various times but the thunder and lightning have stopped. Forecast calls for rain all night. Glad we're on high ground. ~laugh~

So that was our day, nothing exciting but not boring. Thanks for stopping, feel free to leave a comment! Until next time...be safe, take care.....