Visited Yuma, went out for lunch.....


A post this morning for yesterday as I just didn’t seem able to put anything together last night. We were up and had our hot drinks before climbing into the Dogsled for a day in Yuma. We had a number of places we wanted to hit but as you all know, some times things conspire to stop that from happening.

Before we headed into Yuma we took a ride a bit further up Ogilby Road to a spot I found the other day, we figured out how to get the Igloo there if ever we decide to move or when we come back another year. From there we headed down to the rest stop on I-8 West to get some water for our small jugs and leave some garbage.  Thanks George (Our Awesome Travels) for the information, it’s very much appreciated.

We also stopped at the Chevron Station at the Pilot Knob BLM. Diesel was very expensive and we were just looking anyway. It came in at $4.59 per gallon. Not a typo folks, $4.59 per gallon. The water dispensing station we did make use of though. It was a reasonable price at $0.25 per gallon and we only need to fill up one of our drinking water jugs. We didn’t check the dump station price though.


Our first stop was CJ’S Repair on Tiffany Lane as they also do solar and it ’s the only place I could find in the area. The reviews look good and so I thought I’d check them out. Jason their solar expert wasn’t in but they took my name and number and true to the lady’s word, Jason called me back later in the day.

We stopped at Fry’s Grocery and Walmart but didn’t buy any produce or fruit. We noted diesel prices ranging from $2.99 to $3.35 on our little jaunt in Yuma. We also stopped at Lin’s Chinese Buffet for lunch. The selection was fantastic but we both found the food wasn’t as hot as it should have been. We weren’t there when they first opened and there were a lot of cars in the parking lot so I’m not sure what the explanation could be. We would however go back another time as perhaps this was a fluke.


From there we headed back home. We were of course stopped at the check point for Agriculture at the California state line. I asked the fella where a person grocery shops in this area if fruits and veggies can’t be transported. I was truly impressed with his answer. He kind of did a ‘awe shucks’ drop of his head and said,’If you buy things in the grocery store MOST everyone will let you through as long as your citrus purchase is grown in California. NO MANGO’s can cross the line. You can’t pick from the trees or buy from a vendor but a grocery store purchase is usually allowed. However we have a couple of  new hires and they have been taking some things.” He shrugged his shoulders. He didn’t mention any kind of produce at all. All dairy is allowed he said.


We came on home and putzed around for the rest of the day. We had splashes of rain all day, off and on, overcast skies with the odd sunny break now and then. Climbing into bed with a book around 8 PM I head the rain start and it continued pretty much most of the night. Not a hard rain but enough to make the ground soft in places. 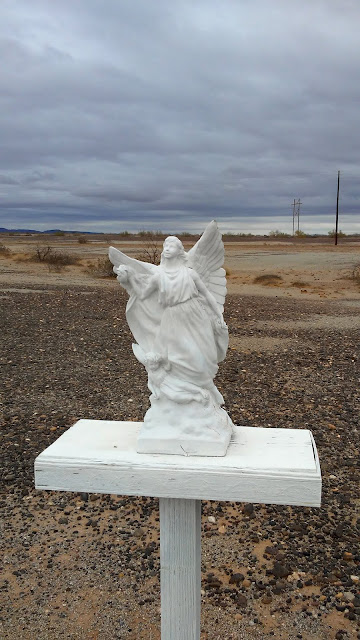 So there you have it, our day yesterday. Not exciting but we enjoyed it. Thanks for stopping by, I hope you enjoyed your visit.