We traveled into the future and then back into the past today....

Our Location:
BLM on US 62 East, near Carlsbad, NM
(the pictures with the odd colour of blue or fog like appearance is due to the blue tint on the window of the Dogsled)
A cool morning when we woke in Deming, about 49F/9C but we moved right along and didn't bother with the heater. In fact we didn't take long to get ready to roll out, we had chores to do before we hit the road. We left the empty lot, which still had at least a half dozen or 8 rigs still there, and I'm sure over half of the overnights had already left. The lot seemed pretty full when I last looked outside last night, rigs, trucks, cars, MH, 5'ers, etc. I was a bit worried that the Valaro 5R gas bar would have a busy dump station but not a single soul was there when we arrived, nor did I see anyone there while we were in the lot. It took us about a half hour to dump and fill with water before we moved out to the pumps to give the Big Dog a drink. He was getting low, right about the 1/4 mark which is low for me, I'm always looking to fill around a half. However I knew we'd be getting fuel first thing so I didn't worry about it.


We were on the road after all chores were complete around 9:15 am. Pretty good timing I think as we had about the same number of miles to put in today as we did yesterday, about 245 miles/394 km. According to Phoebe (RV GPS) it would take us about 5 hours. She was pretty close to being right on the money although she did get us to make a wrong turn which I had to correct by pulling a U turn at one of the cross overs. More later.
We pulled into the Las Cruces, NM rest area to see the big Road Runner in all his splendor and I wasn't disappointed. The views of Las Cruces are wonderful and I wish I could have seen them at night but perhaps another time. A wonderful sight even in the day light. After a short 15 minute break we climbed back in to continue on our drive, checking out the time it was 10:30 am when we were taking the on ramp back to I-10 East. It wasn't long before we left Las Cruces, NM in the review mirror or in our case, our out side mirrors and entered the state of Texas. We didn't know but Texas isn't in the same time zone as NM or at least our phones didn't think it was, and moved us an hour ahead AGAIN. 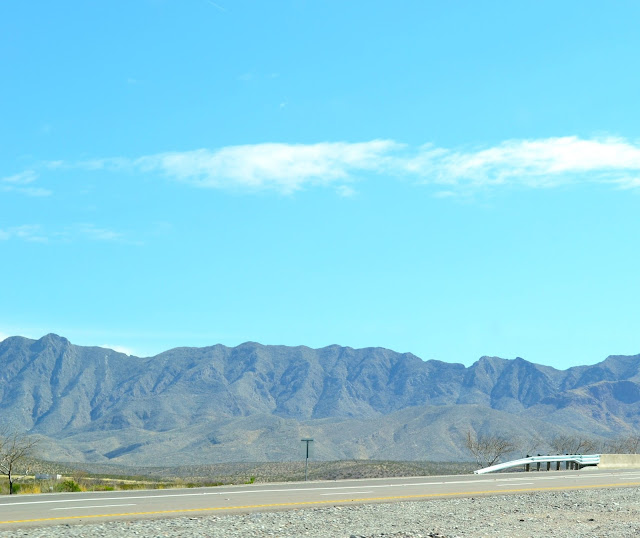 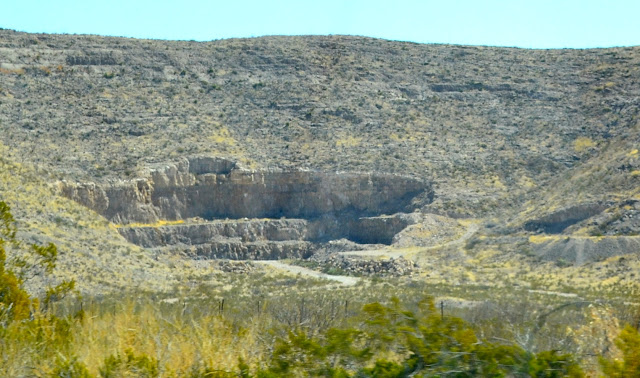 The drive through Texas was long and uneventful and we like those uneventful kind. The scenery passed from mundane, dingy, dirty to mountainous, beautiful, breathtaking, rugged, inclines, declines, sharp corners, and flat scrub land that went on for miles out the window. At times we didn't see a single person, living creature or vehicle, just us. The land looked great for cattle but nada, not one for a long time, eventually a couple turned up but it wasn't until we were almost out of Texas. The mountain regions, like I said were stunning with captivating views and picturesque vistas. The mountains ranged from rugged, cold, unyielding stone to softer, greener, layers, and once again to hard edged, angled white shale/limestone like appearance. The colours also varied on the same mountain as stark white lines showed in various places, indicating water ways that were bordered by darker, denser looking areas. Sand, gravel, and shale also seemed to make appearances. The vegetation is now grass, stunted Yucca's, bushes, and other larger leafless trees. The flat lands showed off seas of dark green,almost black vegetation in some places and yellowish grass showed in many places.


We followed this route back into New Mexico where the time once again dropped back ONE hour to what we had been this morning in Deming, so we drove into the future only to drive back into the past. We've been time traveling.
The route we followed was 1-10 East to 375 Loop, to US 62 E/US 180. That was it for the roads we travelled today. Our Phoebe's got us royally confused when we left the 375 Loop, I was certain we should go left but she insisted it was right, of course once I was committed in the lane to go right, she changed her mind to 'turn left at the light'. I was tempted to drop her out the window, and do her some serious harm with a number of tires. However, I managed a quick U turn and we were once again going the proper direction. That was our only issue for the day, how nice was that?


I found this campsite on a free site, actually I found two of them but this one came first so we tried it first. After crossing back into New Mexico on US 62 go to Mile Marker(MM) 10, and immediately turn right (coming from the direction we did) it is BLM land, you cross a cattle guard and the road isn't great but not nearly as bad as some we've taken. It's a bit rough so slow down and take your time. About a mile back from the roadway you begin to see some boon docking sites. Some are bigger than others, some are more geared to bigger rigs (although the tenters seem to like these ones best), some are back in, some are probably pull thru. We parked just off the roadway and continued on foot for about a mile. Found a great spot and walked back to the Dogsled, climbed in and headed to what we figured would make an excellent place for us to spend the next number of days. We arrived to find someone from further back off the road had come forward to claim our spot before we could get to it. Next time Riley will stay until I come back with the Dogsled to ensure that doesn't happen again.


We continued further on and came to a big spot at the fork in the road. We decided this would be the place to call home for a while. It's a big spot, wasn't hard to get level and although it's pretty windy here I don't know if it would have made a difference in the other spot or not. There are no trees, only low growing shrubs, yucca's and some grass. We have a fire ring that was still smoldering from the folks that had left here and pulled into the spot we wanted. That's how quickly they had left here. There are plenty of people around, and I'm sure it will prove to be interesting as the week continues.

We were completely set up and Riley had started some lunch ( I was outside doing a few things) by 4 pm MDST. I called my dad to let him know we'd arrived, we chatted for about 25 minutes, about the freezing mark at his house, snowy and blustery but not really accumulating on the ground.


Lunch was a chicken stir fry, Riley did a fantastic job. Thanks Riley. You've been cooking quite a bit lately, and I appreciate it very much.
After that we both settled down, me to edit pictures and Riley to play her game. Don't ask me what game but she plays it a fair amount, I know this because she talks to it and I'm pretty certain like a child it doesn't listen very well. She continues to talk and of course, it continues to ignore her. So I'm not sure why she enjoys it but she seems to.

So there you have it, our last travel day for a few days. A few fun facts for those that care, and for me to remember some day. The highest elevation we reached was just under 6000 feet, we passed through the Gaudalope Mountain Range today, the temps on our drive ranged from 50F/10C to 65F/18C today. We are currently sitting at about 3200 feet and are approx 10 miles/16 km from the Texas state line, and approx the same distance from the Carlsbad Caverns National Park near Whites City. We are approx 40 miles southwest of Carlsbad, NM. NOTE TO SELF ABOUT ROADS: The roads today were poor to good to very good. Some of the interstate needs some attention, while I didn't find any holes I did find lots of worn pavement that has worn down to the previous pavement. Other places were good, but you can tell where the construction has been as they didn't fill the rumble strips very well and it makes you wonder about the tires for the first little while. The mountain incline roads were pretty steep for the most part, the declines were also pretty steep in places and more gradual in other places. Again picnic and scenic views were part way up and one would have to start uphill from a full stop. Overall, a road I would take again, a route I would take again.
Thanks for stopping by, I hope you enjoyed your visit and I appreciate the time you spent with us today. Feel free to leave a line if you feel so inclined. I will answer each one. I hope you've had a good day doing whatever it is that kept you busy.
Until next time... take care, be safe,
Deb