Some cleaning, cooking and reading....

A cooler start to the day this morning. I slept soundly last night and didn’t hear anything until after 7 am this morning. I like those kinds of nights. I checked the temps this morning Dad and it was 35F/1.6C, does that make you feel better yet?

I turned on our buddy Mr. Heater, the little guy, and he heated up the Igloo pretty quickly. Riley was awake already and roused out of bed before 8 am. We had no real plans today and so we just kind of putzed around doing  a few things. After our hot chocolate we discussed a number of things including the thought of moving to avoid the cold that’s coming. We’ve decided to stay put. A couple of cold nights and a bit cooler days won’t be too bad and maybe the cooler air will make it feel a bit more like Christmas. It’s hard to know.

I paid a couple of bills on line, registered my Lynx blocks for their ten year warranty, and checked out the weather. After that I looked up a recipe for turkey/sausage meatloaf. Can you guess what we had for lunch?

I started making the meatloaf immediately as I wanted to let it rest for a while to kind of firm up before cooking. In fact I wrapped it in saran and put it in the freezer for about 45 minutes. It firmed up very nicely by the way. Riley made our salads and the mixed veggies so they would be ready to just pop on the Weber whenever we got around to cooking lunch. I kind of cleaned up the fridge a bit while we had so much stuff out. The crispers needed a bit of wipe, and the bottom shelf of course, along with one of the shelves in the door. So while those things have been tidied a bit, I’ll have to defrost the fridge in the upcoming weeks anyway but at least it looks a bit better.

Riley and I have been debating about the replacement for the love seat. We chatted about a number of different options we have. We’ve settled on something a bit different than our original plan.  In fact the results have been enough to allow us to have more space for our replacement options. In fact we’ve decided on two separate chairs along with a table (having at least 2 drawers) in between. I think we’ll really like this much better.  The solution was easy, we just moved the table.

After our interior fix we both sat down to read. I’m enjoying my book but I was extremely restless today and so the book couldn’t hold my attention. Instead I wandered outside looking for something to do. It was too cold in the shade, too hot in the sun, add a sweater, take it off, move here, move there. You get the idea. I came up with the idea of cleaning some of the dust off the door screen which of course at my height means I need the 6’ step ladder. While removing the blue boy and the step ladder I realized just how sun faded some of the bungees are, I’ll be looking for some more new ones in the near future.

With the ladder off and the screen door cleaned I grabbed some paper towels and proceeded to do the kitchen window, then my bedroom window. As they weren’t in the sun, eventually I moved to Riley’s bedroom window, and two small windows in the slide. I stopped with 3 more windows to go as they were too heated from the sun to attempt any kind of cleaning at that point. I’ll have to do it another day. After finishing the windows I climbed up on the roof and cleaned the solar panels as well. I have to tell you, I don’t think I”m going to worry about them not having the ability to tip. With the four panels flat on the roof they reached full charging capacity before noon. Since we don’t use a lot of power I think I”ll just leave them alone, flat seems to be working fine.

Down the ladder and things put away it was time to think about cooking lunch. I turned on the Weber letting it heat up for about 5 minutes, then placed the meatloaf on a small sheet of aluminum foil, just big enough to fit under the actually meatloaf. In hind sight I should have sprayed it but, oh well, next time I’ll try to remember. Once placed on the small piece of foil, I placed the meatloaf in the centre of the grill with the heat on low. I spent the next 45 minutes putting up our Christmas Decorations, reading and taking in the views. At about the 30 minute mark I inserted a meat thermometer taking a reading of about 115 in various places. At that point I added the mixed veggies to the grill and shut the lid again. After about 15 minutes I checked everything again and while the numbers were getting pretty close to the desired mark, I added the cauliflower in a separate packet. I also used the brush to apply some sauce to the entire exposed surface of the meatloaf, including the sides. Not too thickly but to ensure it was covered and wouldn’t allow the meat to dry out. With the lid once again closed I left it for another 10 minutes before once again brushing the remaining sauce on, and turning the veggies and cauliflower. Another 5 minutes I pulled the meat loaf onto a small plate, closed the lid and let the veggies continue to cook. Inside I let the meatloaf stand for about 10 minutes while I finished up outside. By the time everything was ready to come inside the meatloaf was ready to be sliced. Everything was excellent. I didn’t get any pics but trust me, we will be doing this again. A little less black pepper next time. We use fresh ground pepper and it’s much stronger than regular shaker black pepper. So note to self…..less damn pepper. 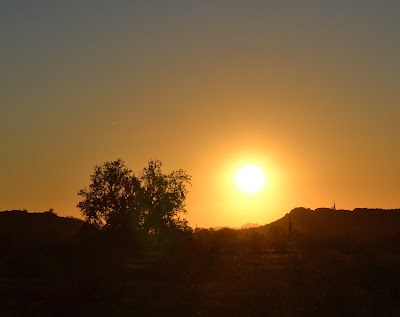 Ernie and Debbie pulled out while we were enjoying lunch. Meeting them was very nice and the way it happened was certainly entertaining. We hope to met up with them again and become better acquainted at some point. Safe travels to those Saskatoon folks. 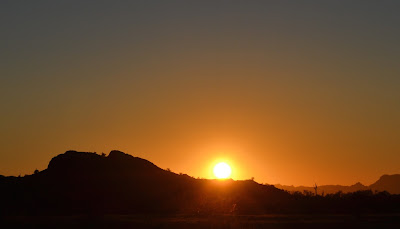 After finishing the dishes and cleaning up outside Riley and I grabbed our walking sticks, and shuffled our feet all the way to Courthouse Road and back. Didn’t take long, and I’m sure we’ll do it again in the near future. It’s a nice quick, walk but the closer to the road the more noise you hear. 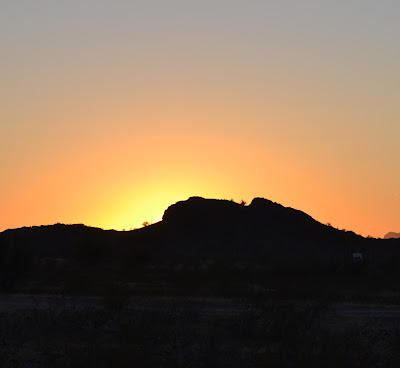 Back home, time to write my post, edit my pics and catch the sunset. Those things I usually do all at the same time. I’m talented that way!!! But I couldn’t chew gum while doing all those things, that would tax me beyond my capabilities. It’s good to know one’s limits.

Riley and I have been discussing our future camping plans, and have come up with a couple of tentative ideas that include Joshua Tree area for some or most of January. A couple of reasons for that location. Close to Aunt Janet (Riley’s Aunt), and also gets us away from the crowds. We like both of those things, so that’s kind of the plan at this point, although it could change at any time. 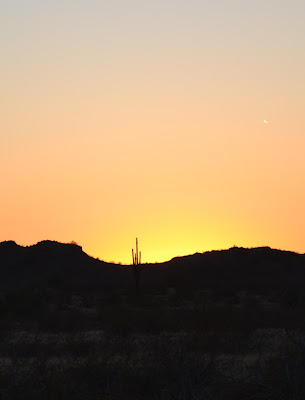 That’s it, our quiet day. The kind we like, with no drama, loud folks, loud noises, barking dogs and most of all it was a peaceful, amuse ourselves type of day. It’s a good life and we are enjoying it very much. 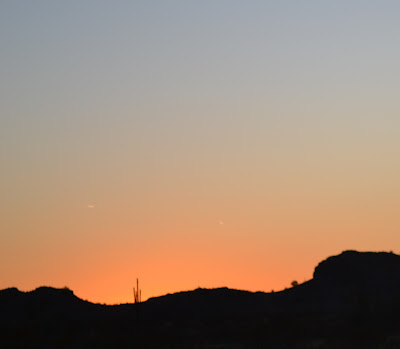 As I walked around taking sunset pics a new rig came in taking Ernie and Debbie’s spot. Didn’t stay empty more than a couple of hours.

Thanks for stopping by, hope you enjoyed your visit. Feel free to drop a comment. A quick note for my Dad, temps
reached 77F/25C this afternoon but it was chilly in the shade. Just thought you might want to know that!!!


Until next time, take care, be safe…