Our Location: Saddle Mountain BLM, Tonopah, Arizona
Today's pics are tonight's sunset. Those of you that have been in the southwest know the beauty of a sunset out here and I always only show a few pics but tonight I thought I'd show a wider variety of them to give those people that have never experienced one a bit more of an idea of what we see. All of the pics were taken from various spots within a short distance of the Igloo. If you look closely the colours are all a bit different with less or more of the colour showing. I hope you enjoy the sunset! I certainly did. 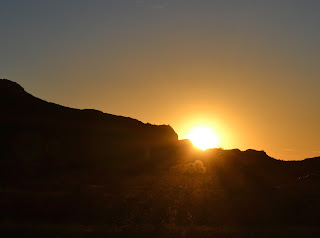 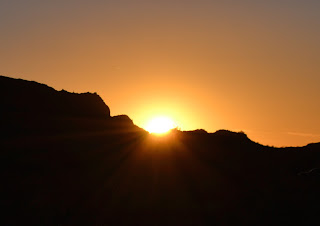 A chilly night, reached just about the freezing mark but the sun warmed things considerably today however we didn't break the 55F /12C mark and there was a certain nip in the air with a slight breeze that said ,"Hey, don't forget about me." So we needed warmer sweaters and if outside for any length of time they would be zipped up and hoods were a nice feature. 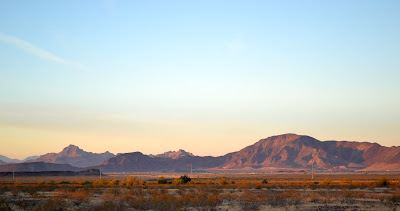 It was a putz around day, we didn't really do anything and we didn't walk today either. What lazy sluggards we are becoming. I did manage to reattach the Blue Boy and the 6' step ladder to the Igloo's stationary ladder. I added the extra security of a ratchet strap along with the bungee cords just to ensure it stays where I put it. I'm sure it's over kill but well I feel better, and that's what counts.

Noticed a new resident zooming past this afternoon, a nice little silver baby truck with a cap towing a Casita or some such little thing behind him. He was cruising right along too, went all the way to the back where we had thought of going a few days ago. 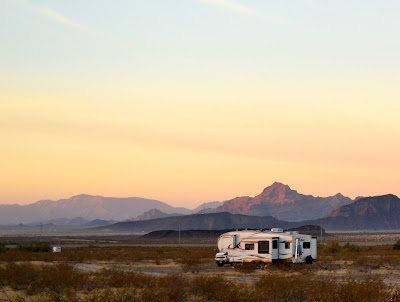 We noticed Don and Lilly shuffling on by. Lilly lagging behind as if to say, " Hey Dad, we stopped here the other day, aren't we going to stop again?" Finally I guess she realized they weren't stopping and off she went on the tear, catching Don pretty quickly.

We sat outside for a bit today but there bees were back. I even put a small dish of sweet water but they didn't seem to bother it, just buzzed us over and over and over. They don't sting but they get in your hair, on your hands, etc. It's very annoying. They finally drove us inside. They then proceeded to buzz the windows to the point where one actually managed to get inside and the cat chased it for a while. Finally we had to shut the windows to get away from the buzzing noise. I'm going to ask Don if he's bothered with them as well or it's just us. 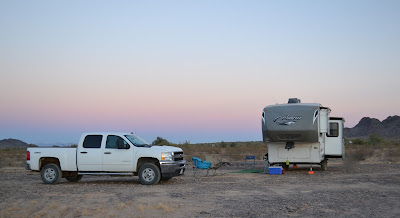 Lunch was just a salad for me, Riley had a pasta salad. No pics, and no Weber for the last couple of days either. Maybe tomorrow we'll get the ambition to cook. 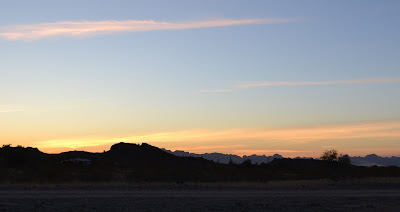 I did manage a nap this afternoon. Slept a few hours. Not sure why I needed that nap but that's okay, I'll take it. 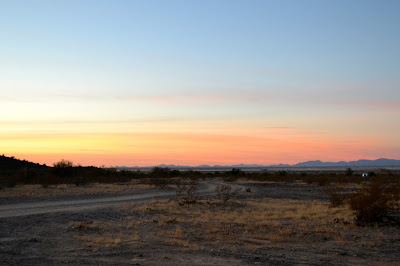 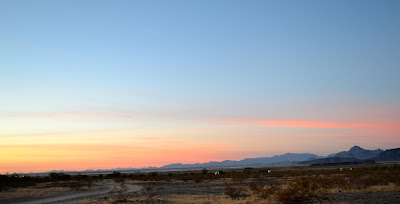 I watched the sunset tonight. Walked around getting various pics from different angles/locations. The sky was indeed a fantastic colour. I may slip down by Don's beautiful little Air Stream tomorrow night and catch the sunset if he doesn't mind. I think it would make for some wonderful pictures in a sunset. 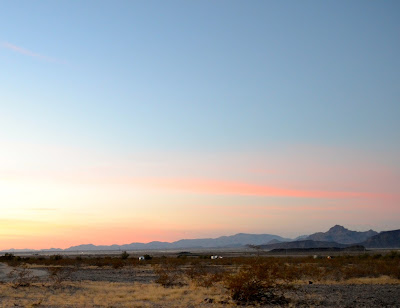 I gave my sister a quick call but she didn't want talk and didn't answer the phone. However since it's Friday night I'm sure she's on a hot date or something pressing. Right Jan? 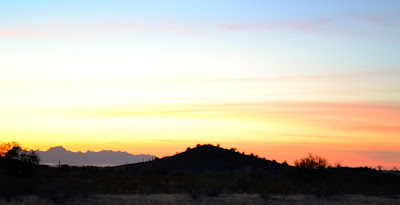 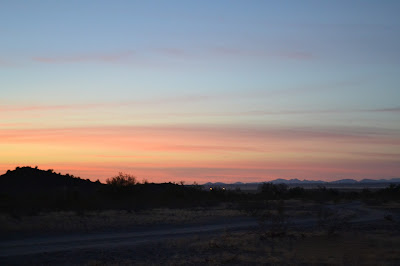 I called daughter Courtney as well, son in law Matt answered her phone, always nice to chat with Matt. He informed me and Courtney confirmed she is heading out with her friend Jodi to catch the musical Bat Out of Hell. I remember when that album came out and loved pretty much every song on it. Courtney also loves that album. My girls have a wide taste in music and I'm glad they do. Their tastes run from folk with such favourites as John Prine, Jesse Winchester, and Bob Dylan, thru the Beatles, The Stones, Barry Manilow, The Guess Who, Neil Young, Springsteen, Melencamp, Seger, AC/DC, Meatloaf, CCR, Tina Turner, Bryan Adams, Burton Cummings, Nickelback etc all the way up to their own newer tastes. Riley even adds in some BB King to her music. Not much country in there but some pretty good artists over all.

So there you have it, our lazy, laid back day. Thanks for stopping by. 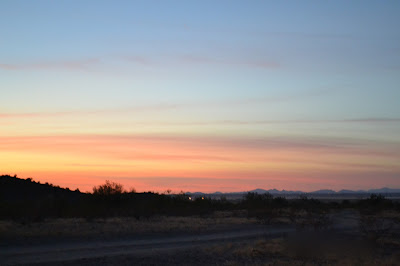 Until next time...take care, be safe,
Deb