It was a bit chilly this morning and I stayed under the covers until the clock said it was nearer to 8 than it was to 7:30 am. So I  missed the sunrise and frankly I was just as happy to stay inside as it was only 37F/2.7C outside. I think I'm becoming a wimp when anything in the 30's is too cold for  me. Gosh I wonder how that happened? I've always disliked the cold but usually I'm not such a whiner about it.

I puttered around doing a few things and starting the water to heat, turned on the heater by which time Miss Riley had her eyes open but was refusing to acknowledge that she was awake. I think she would have been happy to turn over and go back to sleep. However once I mentioned the water was on she managed to extricate herself from beneath her mound of covers (although she didn't have her duvet pulled over her) to stumble out into the kitchen for a few minutes.

We discussed our options today, Riley insisting she didn't want to walk anywhere at all. Driving was the order of the day. We discussed Buckeye but instead chose to check out the canyon Doug from Miss Adventure Travels mentioned the other day. He and Yuma had some fun in there and it looked like a great place to venture into, so that became our plan for today.

We climbed into the Dogsled heading back toward the canyons but checked out another road first. It offered some interesting views but nothing that would lead us to bring the Igloo there at any time. It dead ended not far from into the small foothills, so we turned around to go back to the beginning of our own road, but we took the right fork which we've taken before but this time we were going much further. We live on the left fork.

This trail actually goes on the west side of the mountain just outside our door. A few days ago on our hike up the mountain Riley and I could see the location Doug had mentioned where the roads connect and the fence runs along. It was very visible when we stopped on the small plateau and looked west. So if some of the pictures look a bit familiar that's why.

The road is rough in some places but not bad in others. We drove further into the canyon until we came to place to pull off. We hadn't gone too far but I was enjoying the views and I thought perhaps we could walk the rest of way as it looked to be getting more narrow the further we went. Riley didn't want to walk, not even on the road so I told her I'd be back in 30 minutes. I should have said 45 but oh well, I couldn't call her, no signal in the hills. I was back in 30 minutes.

Since Riley wasn't with me I had no issues with getting off the roadway and I never made it back into the canyons that Doug had mentioned. Instead I climbed almost to the top of small dip in the mountains but ran out of time to make it to the top and be back within the specified time. I did manage to see some interesting things on this rapid climb though.

These mammoth statues offer many things to those that come, that dare to drive or walk in their shadows, and to those brave enough to set feet down upon their sides and venture upwards they offer treasures long forgotten or perhaps unknown. The treasures I've seen through the camera lens views that leave one in awe, they defy words worthy of their beauty. A treasure that I have been granted to witness first hand. How can one not be humbled by such a gift?


I climbed high enough to see some of the campers here on our side of the mountain through the gap. It was a sight to see and I wished I had more time. It would have been nice to make the top, I'm certain the views would have been spectacular. However I had to hurry back down to make the appointed time. Next time I'll go back by myself and take my time to reach that peak, maybe go a bit deeper into the canyons as well. Today we barely touched the outer edges.

I hurried back down to make the appointed time and strolled up to the door at exactly 11 am. Riley was waiting patiently playing on her phone. I don't think she would have minded me being late. We opted to turn around there and head back home. The road didn't get any better the further we went so heading back was the choice this time.

We were back home at the Igloo around noon hour. Finding some books on our doorstep as we had given some Canadian folks a bag of books a couple of days ago and she returned the bag with a new selection for us. Some we've read but that's okay, we'll eventually find someone to trade with again.

We decided since there was little wind we would burn the cardboard boxes our chairs came in. We emptied the fire pit of previously tossed in wood (someone left it full before our arrival) tossed in some paper and started our fire. It took about a half our to burn all of the cardboard, tossing in a few 'sticks' that we'd removed to help finish the burning process. About an hour later I poured water on it to ensure it wasn't going to flare up as the wind gusts were picking a bit, not much but I didn't want to have any issues. 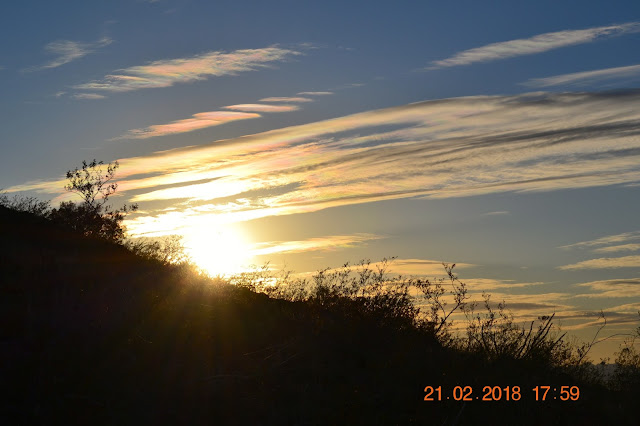 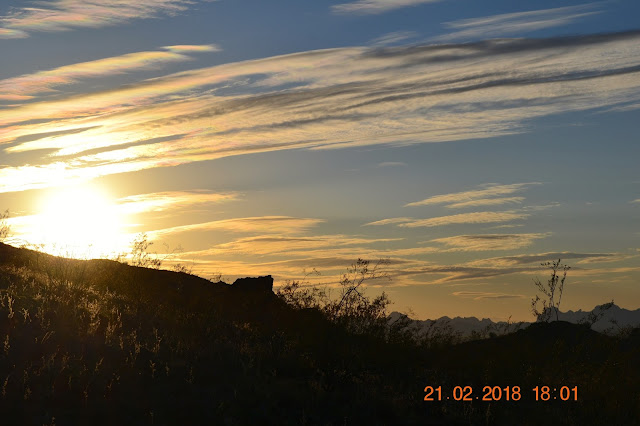 Lunch today for me was left over soup and small piece of ham steak. For Riley I bbq'ed a ham steak, a veggie packet of asparagus, green beans and mushrooms, along with some potato wedges. She enjoyed it and cleaned up her entire plate so it must have been good. I enjoyed the veggie soup and we have enough left over for one more meal. Although I've already started to prep everything for sausage soup tomorrow. I'll just brown the sausage in the morning before tossing it into the slow cooker with all the other ingredients. It can cook all day while we are out.

I had a nap this afternoon, as the climb tired me out. Only about 45 minutes but that was enough. We kept the door and windows closed most of the day as it's a bit cool with them open. So tonight on my way to take sunset pictures I bundled up but I think it was a bit much, I ended up taking off at least one layer. Better to have it to take off than not to have it and wish for it. 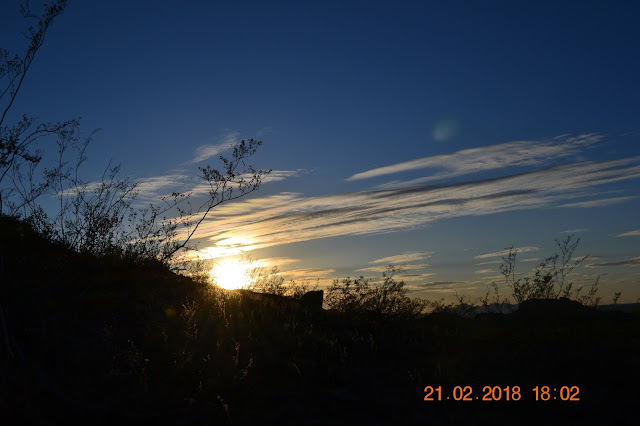 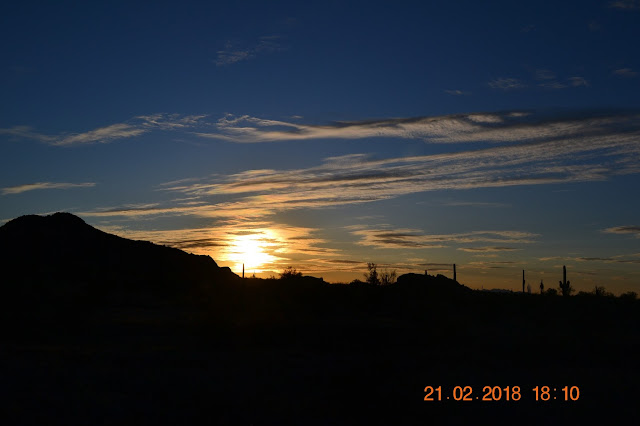 Read my book for a while before heading off to take sunset pictures. Once again I headed cross country to the hill just outside the door. I've climbed it a number of times but haven't seen any evidence of the big horned sheep others have seen. Tonight I was up and down and back up trying to get a good view of both the path I think they might take and the sunset. Finally I gave up and chose the sunset instead. It was a pretty one tonight. Although I didn't get too many pictures. 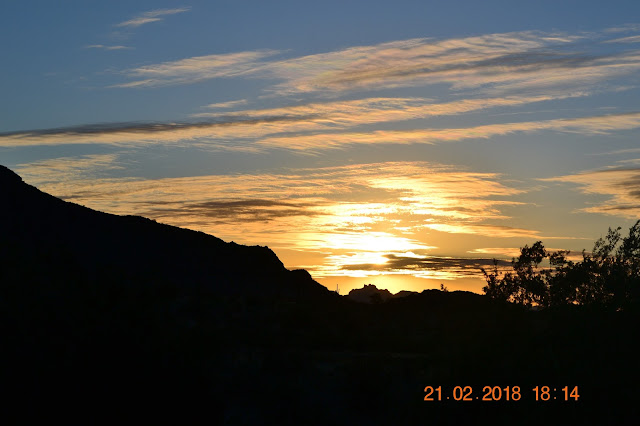 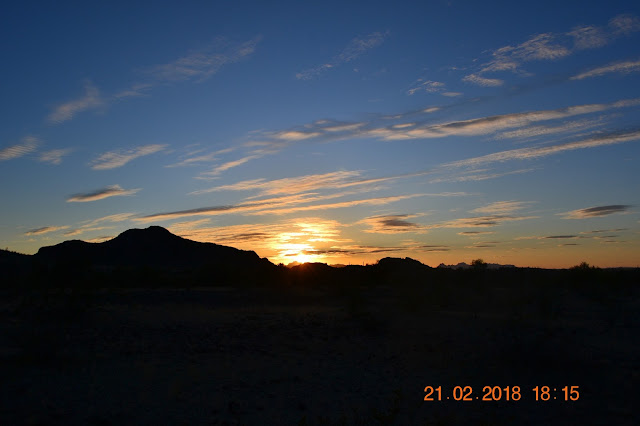 I was trying to chat with my dad while I was up on the side of the mountain but there was too much interference. I hung up until after the sunset, walked home and called him then. We chatted for about 20 minutes, discussing a few things and catching up. 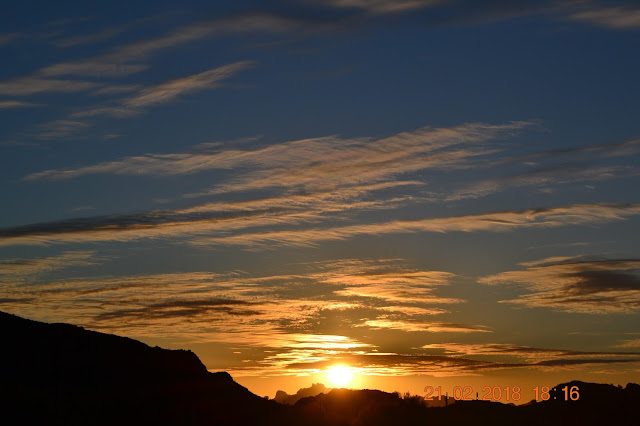 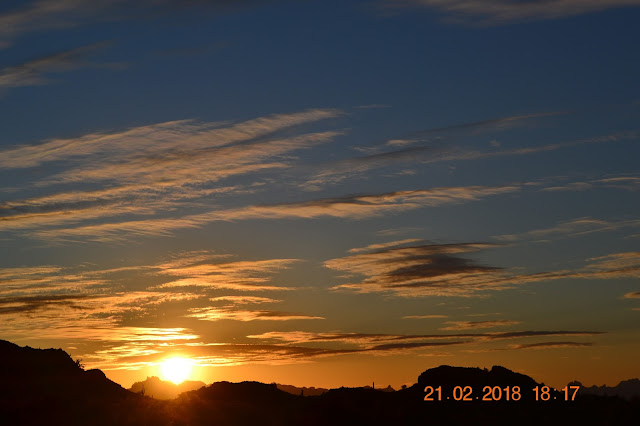 I had to move inside while still chatting as the air was just too cool outside. It was 7 pm and the temperature was 55F/12C and falling fast. Hopefully this will be our last cold night. After that I donned my jammies and started editing my afternoon/evening pictures and writing this post. 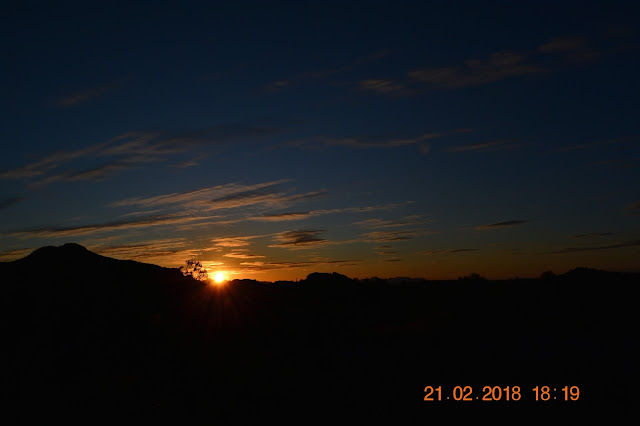 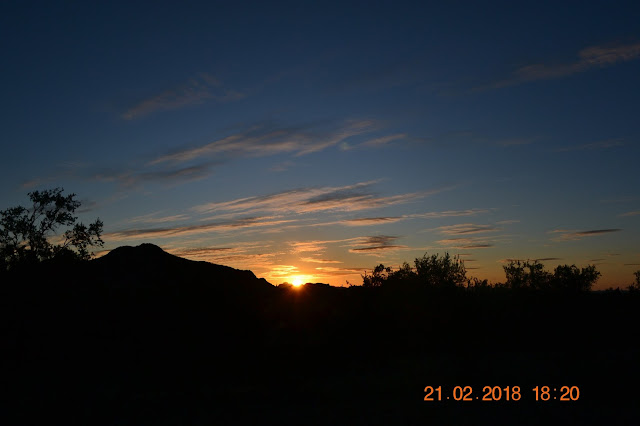 That was our day. A bit of a driving tour, a bit of a hike, chatting with dad and a sunset. A mixed bag of sorts I think. Tomorrow we have definite plans to head into the town of Glendale and for a our first ever visit to a Cabala's store. Some new hiking boots are in order. We have a few other things we need to do in town as well but that's for tomorrow. I think we'll stick to that plan as it will keep me off the mountains for the day. 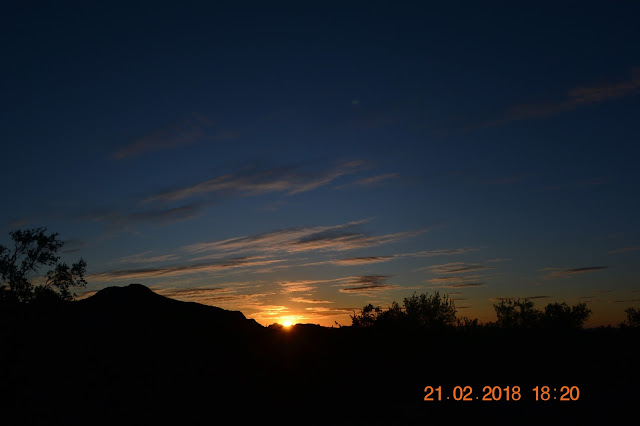 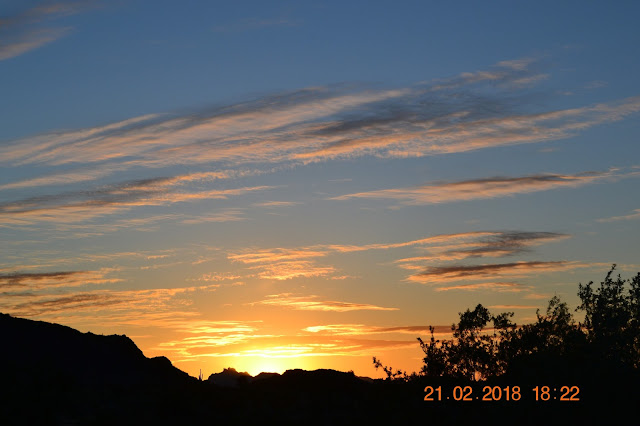 Thanks for stopping by, I hope you enjoyed your visit. Feel free to leave a comment. 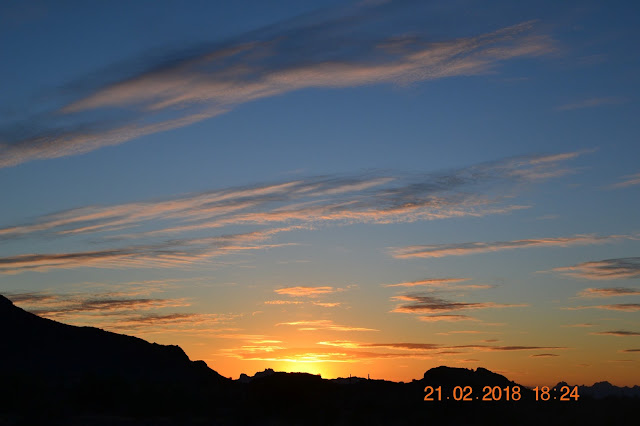 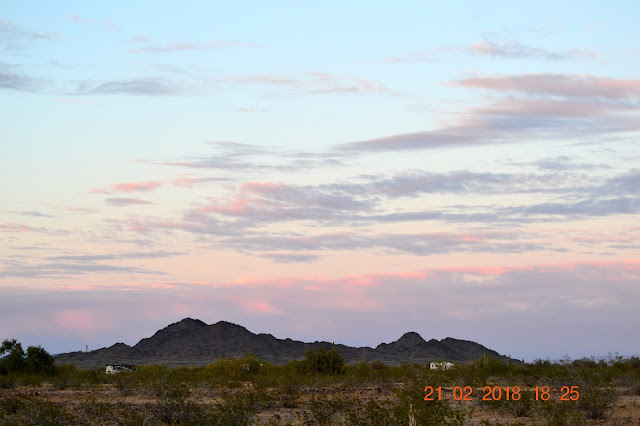 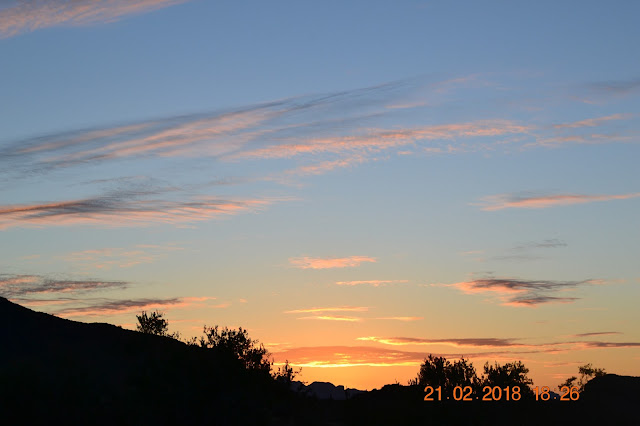