Our Location: Superstition Mountain BLM, Apache Junction, AZ
I was awake this morning before 6:30 am and managed to haul myself out and get the day started just around that witching hour. Riley was up shortly after and together we had things all ready to head out at 8 am. We had discussed with Doug (Miss Adventure Travels) that we'd leave around 9 am but we sent him a text saying anytime he was ready we were too. We agreed to meet at the motel in Tonopah within the half hour. Riley and I headed out and arrived in time to stretch our legs and just do a walk around to check things over before our 100 mile drive. It wasn't too long until Doug & Yuma were coming down the road.  They pulled in and we agreed to caravan to Love's for the dump station, water, propane and of course we dumped our trash as well.
Love's was very busy, Riley and I used the facilities while Doug & Yuma headed off to find propane. We had just about finished when they pulled in behind us. Bit of a mix up with keys and locks but after they used the facilities eventually we were back on I-10 East heading toward Apache Junction. Riley and I led the way in the Big Dog and the Igloo moving right along with Doug & Yuma keeping pace behind. It was a pretty straight shot  through  Buckeye, Goodyear, Phoenix, Tolleson, Tempe, Mesa and finally we arrived at Walmart in Apache Junction. In that mess of cities we slipped onto the AZ 202 Loop East (although Pheobe - our RV GPS- wanted us to take the 202 HOV road which I thought wasn't a good idea and so ignored her and took the regular loop instead) getting off at University Dr, and making our way to Apache Trail.

Into the Walmart parking lot we made it, shut 'em down and let out a sigh of relief. We were much closer to our destination now. We all headed off in our own direction agreeing to meet when we were all finished and deciding what to do from there. About 45 minutes later we were all outside comparing notes and discussion Lorne's (A Place Called Away) GPS coordinates. My GPS didn't agree with his coordinates and had it somewhere around Scottsdale, but Doug's phone agreed with Lorne ( I smell a male conspiracy here, don't you?) and so I lead to N Hackamore Road, and then Doug took over.

When we pulled onto this road the first part was paved and looked pretty good. Pretty soon I pulled over and we decided Doug would go ahead solo and check things out as he's much smaller than we are and could turn around in a much smaller spot. So we stayed put while we watched Doug & Yuma driving away. It wasn't long until Doug sent a text saying to come on slowly as the road was 'rufffffffffff'. Well we started off slowly and soon were going even slower, at one point I thought Riley might have to get out and push and we'd have to hook HRH Miss Kitty to harness in front of the Big Dog to help pull but we made it without resorting to those extremes.

We pulled in to where I'm pretty sure that other crew had parked, Doug and I went off in the jeep to check a few more options and didn't go far until we came to the end of the trail. Turning around we headed the short distance back to the where we'd left Riley, Kitty and Yuma but found a perfect spot just before getting back. Long story short, we are parked, leveled, and enjoying the views by around 3 pm.

We invited Doug over a cold lunch, we were all pretty hungry and the food was good. Thanks again Miss Riley for all your hard work making salads yesterday, and getting lunch out and ready while we set up outside. Macaroni Salad, Bean Salad, meatloaf, bologna, bread, wraps, pickles, cheese, lettuce, a few condiments made up lunch. We sat around outside our door munching away and enjoying the conversation and the views.

After lunch Doug headed home, and we came inside to do a few things more in the setting up process. I called my dad again and we chatted for a while before I headed out to catch the sunset. Not spectacular but pretty nice all the same.

Tomorrow may be a short walk here or there but I think we'll take the day off. I'm exhausted, so is Riley and I think Miss Kitty may be pretty tired as well.

Our spot is beautiful, we are literally surrounded by various forms of cacti, tall, short, round, skinny, living, dead and dying. Care must be taken to ensure we don't bring any into the Igloo for little paws to step on. They stick into tires, shoes, skin, etc.

The view out the door is spectacular with Superstition Mountain looking back at us. It is tall, striking, imposing, inviting, and greenish. The sprawl of human kind at it's feet is interesting, not distracting, not unattractive but also not expected. It appears as if humans have encroached right to the very edges of the upward slopes. However tomorrow I'll have a better look and give you a much better idea of what I see.

Mr. Green, I can see why you spent so much time here. It is indeed a very special place. We've seen one horse rider going past our campsite, and one red trolley which stopped just past our roadway and pointed while I'm sure I heard the tour guide saying," I thought we were rid of those Canadians and now look what's here, MORE."

So there you  have it, our moving day from Saddle Mountain to Superstition Mountain. A good day, a nice spot, not far from a good friend. Life is pretty good!!! 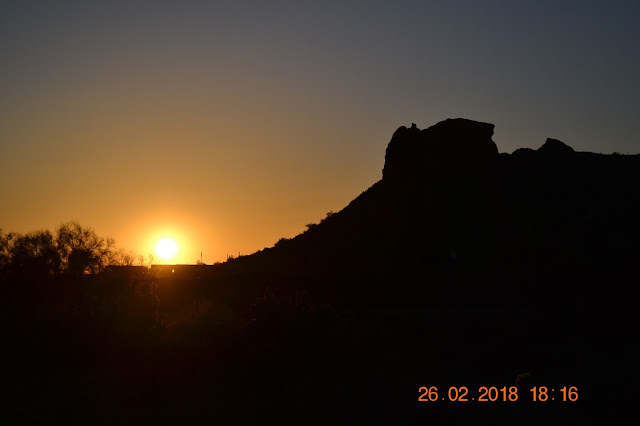 Thanks for stopping by, hope you enjoyed your visit. Feel free to leave a comment if you like. 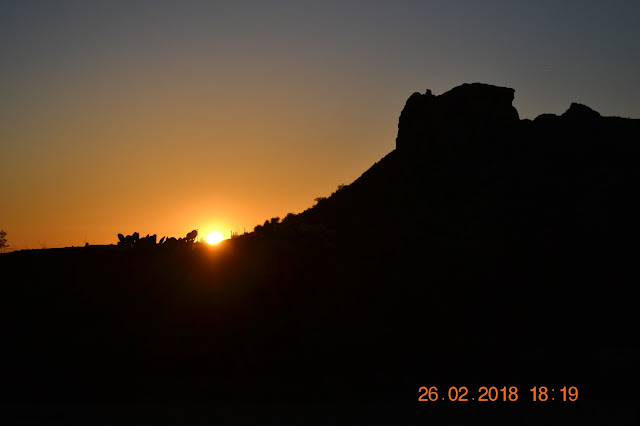 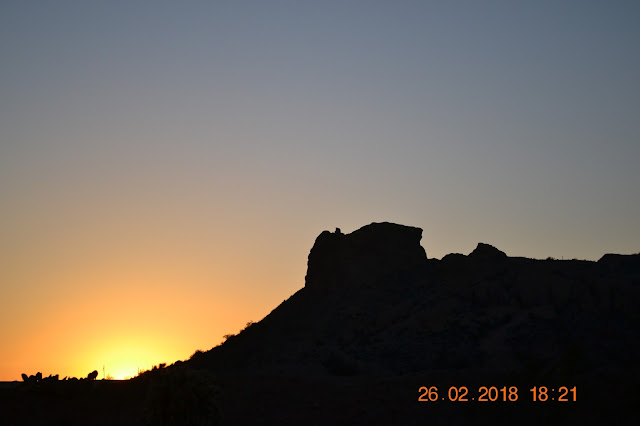