Our Location: Saddle Mountain BLM, Tonopah, AZ
(lots of pictures tonight)
It was cooler this morning with a good breeze that was just a bit cold and told me that if the sun didn't show it's self today it would be very cold. I ventured out taking pictures but didn't go far, taking many of my sunrise pictures from the protection of the Igloo and a full backed chair to help block the wind.
Back inside we had our morning hot drink and hot from the oven biscuits. We planned our hike and the rest of the day. Around 10 am we headed out the door.
The hike was the mountain just outside our door. Although we ventured around to the south side as it was a bit easier climbing. Riley did extremely well with the amount of cumbersome rocks that litters the side of the mountain. It is quite like an angry child would throw sand in all directions, these rocks have been strewn about making it very difficult to find good footing. They come in various shapes and sizes, some are good solid stepping stones and others only pretend until you've put some weight on them before they slip out of place. Toe catchers and under foot rollers also add to the fun. There is also numerous cacti and ocotillo that one doesn't want to run into either. Of course there are few tall stately cacti that stand like sentries on the mountain side, watching over all that passes before it's pointy spines. Some are tall and slim with no appendages, some are single, double or multiple armed soldiers. There are small brightly coloured cacti with red, yellow, pink and purple hues, clusters of spined yellowish cacti, teddy bear cholla, and so on. There are holes, and dips, large steps, sharp inclines, and numerous other reasons to watch carefully.
We angled up the side hoping for a somewhat easy climb and it was until we reached about 3/4 of the way to the top. It became very steep and the rocks more tightly covered the ground with fewer open spaces to step. In to this was strewn some very loose gravel stones that would roll easily under foot. At this point Riley had gone far enough. It was an amazing accomplishment for her and she was very proud of herself as she well should be. This was her biggest climb and she did it very well. Small steps, a slow pace and she rested only once before we started back down. Truly something to be proud of and I think she's now realizing how much fun she can have while hiking and climbing.


The views from up there were fantastic. We could see the layers of mountains with long sweeping valleys and washes spidering their way across the valley sides and floors. These washes were marked with a line of bright green waving in the wind. The valley's themselves had long rolling acres that alternated between greens and browns with curling twisting ribbons of whitish/grey colours that indicated roads. The mountains were of stark contrast, some softer looking with more vegetation visible, the green tint almost hiding the dark black of the stones in many places. The dark black showing off easily against the white of bare shale rock where the water has eroded all other ground cover as it rushes down the hillside in rainy weather. Others were dark and cold, too far away to see any hint of colour or hue other than dark, cold blue.  The tops of some mountains looking like granite domes hovering above the mountain sides, others looking rounded and gentle with various green hues.


The wind was much stronger than it had been earlier in the morning and was a factor in our deciding to stop. It rushed around the mountains curves stealing the warmth from the rocks, at times we could hear it whistle around and between rock outcroppings. It helped to push us along on our way upwards but the further up we went the stronger it became and when it sneaked up behind you it could easily make you waver a bit with it's intensity. Definitely time to get down off the mountain side.


Down was much easier than going up as we had now arrived to a part of the mountain on the opposite side from which we started our climb that was much less littered with rocks. We managed to get down quickly and walked around the jeep road bypassing our own road way home for a quick flat ground walk to check out a couple of sights I had found a few days ago. Always nice to have a few other sights in mind for next time.


As we're flat footing along the roadway we noticed a silver jeep heading northwards from the base of the mountain. Sure enough it was Doug & Yuma of Miss Adventure Travels heading out for a drive. They pulled in to where we were standing, getting out we chatted for a few minutes, Yuma was happy to see Riley and excited as well. We pointed out things on the surrounding mountains until finally a huge gust of wind made us all decide it was time to be getting on with whatever we each doing. Off they went on their adventure while we headed homeward.


We reached home to find some of our stacked refuse (cardboard, packing from the chairs) had escaped from it's weighted down spot and was now making it's merry way around through the bushes with each wind gust. We quickly gathered them up and secured them even more tightly until we can dispose of them in the upcoming days.
As it was much too windy to BBQ Riley offered to make lunch today. Works for me I can work on my chair to remove the swivel. Today's lunch was of course a green salad for me, along with chicken stir fry. Excellent lunch Miss Riley. Thank you very much for all your hard work!!


I had my chair tipped, the swivel off and the base back on pretty quickly. I was so excited but alas there is an issue. It can't rock with the swivel off. It sits too low and the foot rest won't extend either. Hm.....that's no good. So the swivel goes back on but as I'm putting the bolts in I realize that if I have longer bolts I can use that to stop the swivel. I didn't have the proper size but I managed to find something that will work until I get to a hardware store to buy the proper bolts needed. Yeah...I'm happy to report that new chair is now a rocker/recliner which makes me much happier. I can simply remove the bolts if I change my mind in the future. Riley wanted hers to stay the way it came. Works for me, I'm happy, she's happy. It's all good.

Since Riley made lunch I tidied up and did dishes afterwards. Suddenly the wind really picked up and we had to pull the big slide part way in as it was just too much wind and the topper was making lots of noise. Even tied down it was still working hard at becoming a flag instead of an topper. It's just that slide that seems to have trouble with the wind, the other two are fine but they are also smaller. Looking out the window we could see the dust in the air and noted a few folks pulling off of the road to find spots to park. I would imagine between the wind and the dust driving would have been very difficult today and I'm happy we weren't towing or driving anywhere.


Spent some time reading and soon started getting drowsy and finally laid down on my bed for an hour. I didn't sleep but I did rest. I knew it was getting colder as I needed a blanket while laying down.


Around 5:30 I headed out to get some sunset pictures. I needed to layer things as the wind has become quite cold and strong enough to blast through a single layer. I've been looking for the big horn sheep and tonight tried the other side of the mountain with the same results, nothing. However I did get a few good sunset pictures. The wind was stronger and colder as the sun sank behind the mountains taking away even the slightest warmth of it's rays. I hurried my feet homeward and before long was inside the Igloo out of the wind.


So time to edit pictures, write this post and get ready for bed. That was our day here at Saddle Mountain. A very good day with lots of exercise and a quick howdy with our friend Doug. I hear it's going to cool off tonight, tomorrow and tomorrow night so I think we'll head into town tomorrow to pick up a few things we need. Other than that I think we'll stay home and keep warm. Maybe read a bit and just hang out. However that is of course just a rough plan, one never knows what tomorrow brings until it arrives. 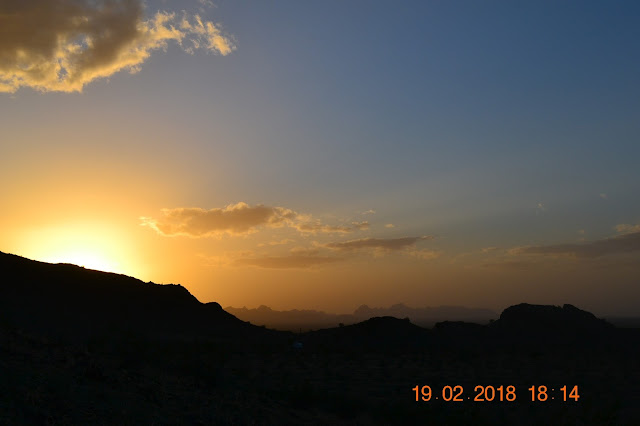 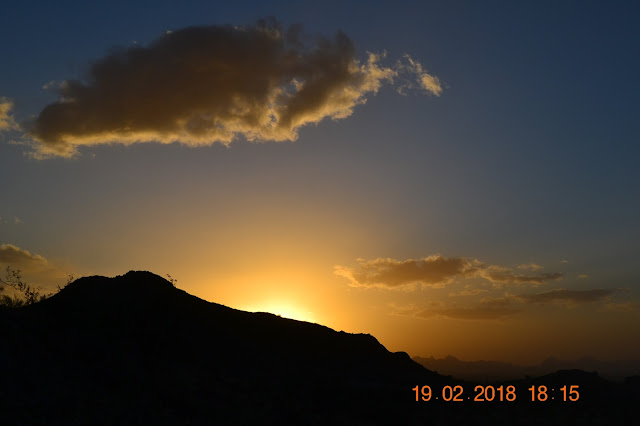 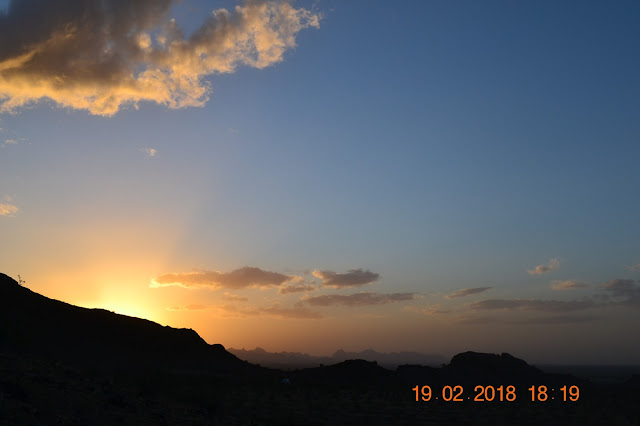 Thanks for stopping by, I hope you had a fantastic day and managed to stay warm and safe. Everything else would be a bonus. Feel free to drop a comment. I read them all. 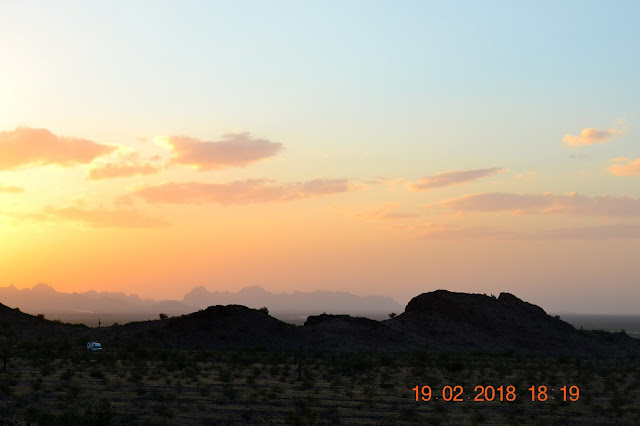 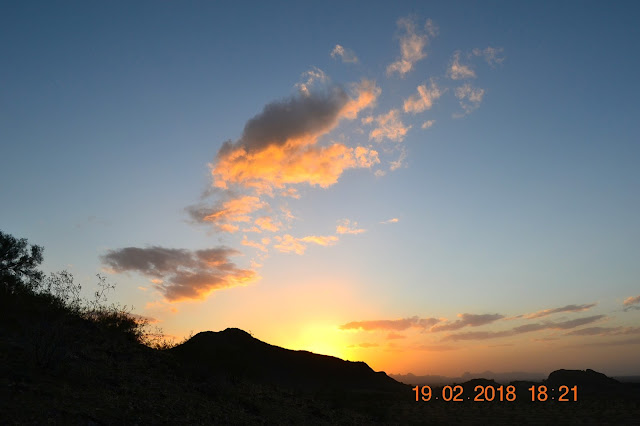 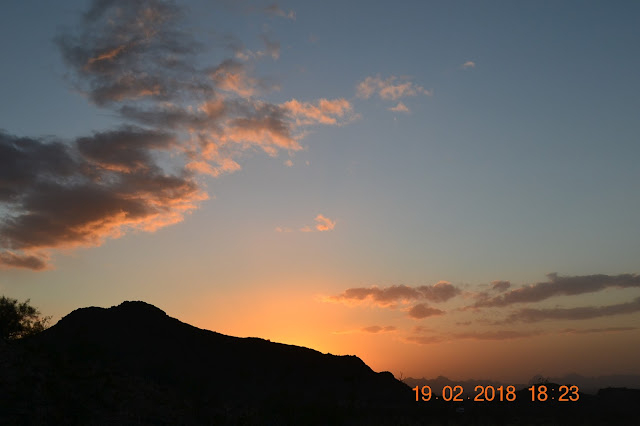 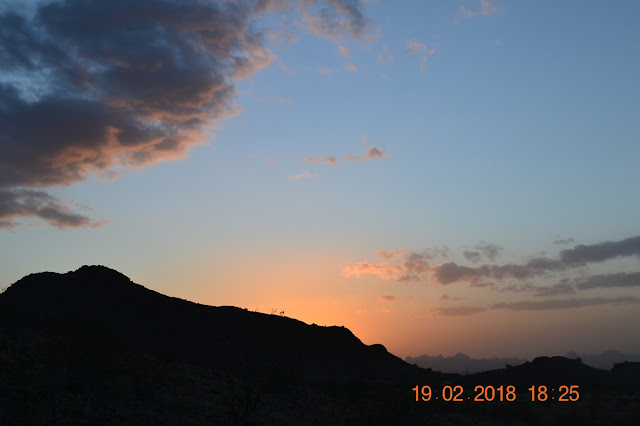