Our Location: Saddle Mountain BLM, Tonopah, AZ
A couple of days since my last post, I believe it was the day we moved, which was Monday. A lot has happened since then, not exactly for us but for our friend Doug. He has taken possession of a new to him Class A Safari Motorhome. A monster at just under 42' long. A big change from his Miss Adventure Class C at about 30'.  You can read all about his adventure at Miss Adventure Travels.

First we had to go to Blythe, CA.
Yesterday morning Doug and I headed for Quartzsite, leaving Riley and Yuma to hold down the fort.  We left around 9:30 am and hustled along just making it to RV Lifestyles at his appointed time of 11 am. Long story short, it was a bit of a confused state for various reasons but it was around the 5 pm mark by the time we were leaving the place.

We went here to use the Notary  for some paperwork.
A long day with no time for lunch or even more than a few minutes break from the stress of this big event. We made a trip to Blythe, CA with Stuart  to a notary for some paperwork, back to Q for a short break while they fixed the power cable and checked on a number of things. A walk thru with Suzie but in all honesty, we didn't take notes as she really didn't have much information to give Doug that he didn't already know. An interesting waste of money, I guess.  One of the mechanics (tech guy I guess I should call him) John, was the most helpful to us. He managed to figure out how to do a few things and was knowledgeable about a number of things.

Look at all the arms on this Saguaro.
Doug was stressed and excited, tired and hungry on top of that as the day was dragging on. We were both at the point of just wanting to get out of the place and go home as we knew they weren't going to be able to assist us any further. 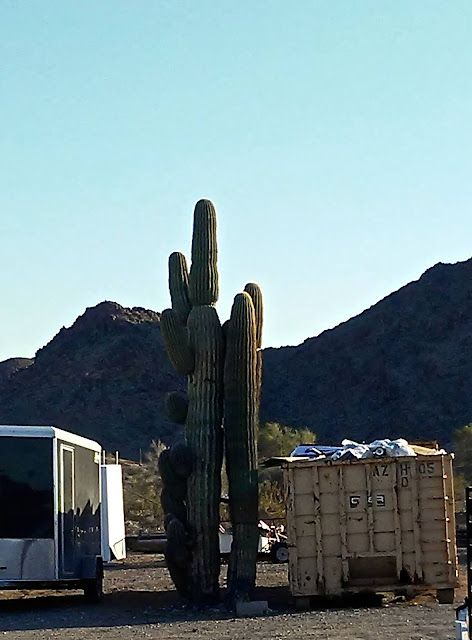 It's a resident in the yard at RV Lifestyles.
Doug moved the White Lion before we hooked up the jeep, it wasn't long until we were motoring along. A very nice ride, high up, big windows, a very nice view. The White Lion is a beautiful rig with a lot of wonderful features and I'm sure Doug will enjoy it a great deal once he gets used to it. It's a big change from his little Miss Adventure. 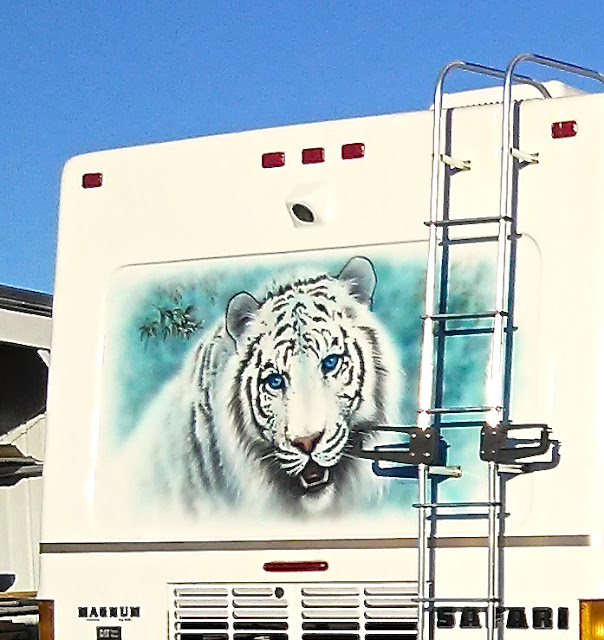 Doug is aware that is a White Tiger but since he is a Leo, he likes the White Lion and since it's his rig, White Lion it is.
We managed to find our way in the dark, as the headlights weren't very bright, it was like driving with candles in front of us. Only a couple of ripples and one bit of excitement as we took a corner VERY, VERY WIDE, but Doug managed to keep it on the pavement. 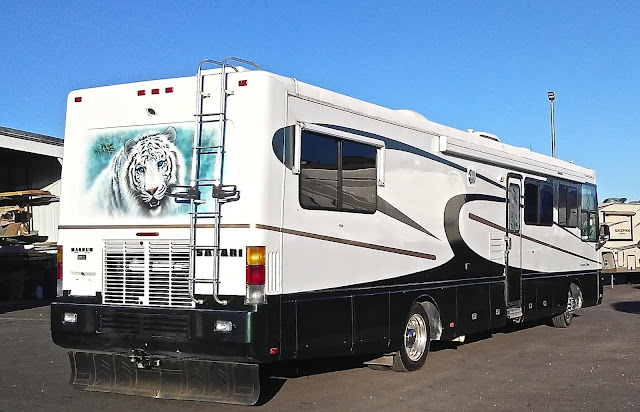 Just a bit under 42' in length. She's a big 'un.
We were both tired climbed in the Dogsled with Riley before we headed to Tonopah for some food. Doug generously picked up the tab. The food wasn't great but it was filling, and hot, our server was a charmer. 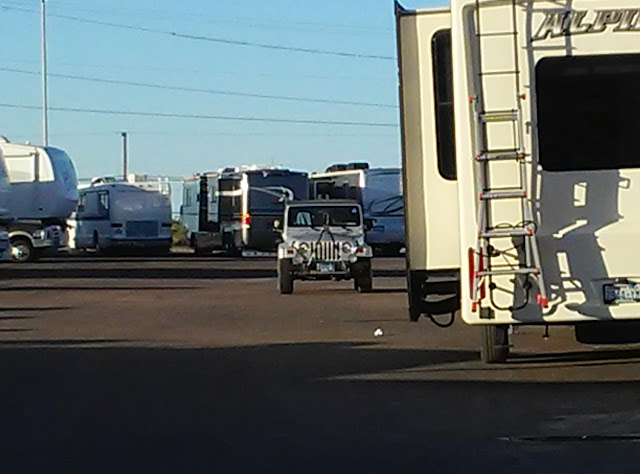 Doug went back to get the jeep so we could get hooked up and out of there.
This morning after a chat with Doug about plans for today ( we will be helping him with the transition from rig to rig)  and it was decided that he would venture out on his own with the White Lion to give it a bit more of a test run as well as get himself more used it. Riley and I headed off to Buckeye with a few errands we needed to accomplish. 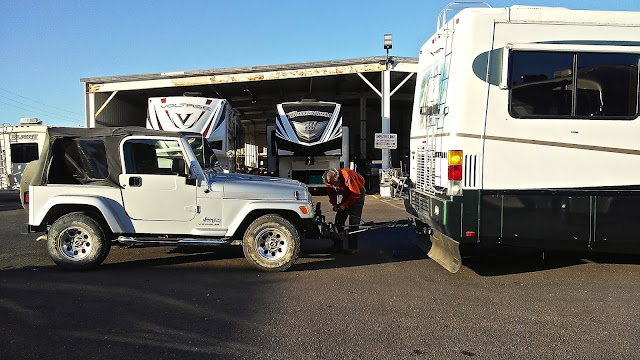 Doug hooking up the jeep for the first time to the White Lion.
Desert Laundry on Monroe isn't as clean as it was in the past but we still managed to get all of our laundry caught up, managed to dispose of our trash, get some water and some groceries. We even managed to spot the White Lion with Yuma in the driver's seat at Walmart but failed to find Doug. 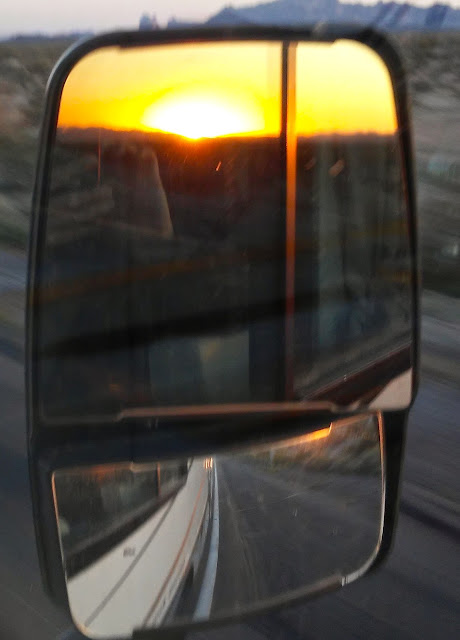 This was the only sunset photo I managed yesterday as we were heading back to Tonopah. If you look closely you can see my reflection. All photos were taken with my phone.
From Walmart it was home and time to put away the groceries and laundry.  Have some food and just kind of relax. Doug and I did a short run to check out another location but definitely knew it wouldn't work and after chatting with a fella that had gotten his 38' Class A stuck it was a definite 'no go'.
So far the flies aren't too bad but I think they will be increasing in number as the heat returns. We are planning on finding a different location if that happens. We shall see how it goes.  A quick trip tonight and we found a spot that we think Doug will like better, flat, easy road access and big enough for both of his rigs and the jeep. A spot for us too but we will wait to check on the flies.
So that's it, my quick catch up. I hope you enjoyed your day, thanks for stopping by.
Until next time... take care, be safe,
Deb