Our Location: Empire Ranch, Vail, AZ
Yes, we've moved. We had a few glitches but we have finally settled in for a while now. However I wanted to share some photos of our rainy day back at Saddle Mountain BLM and so this post will be filled with those photos.  Some how I missed counted the photos and paragraphs, and I have no patience today to fix that issue. Lots of photos in the first half and few in the second. 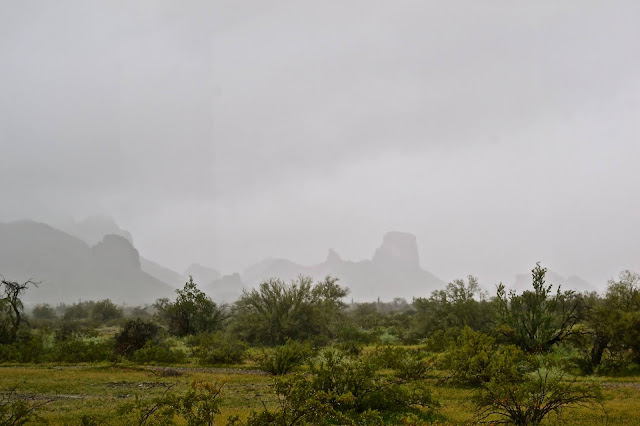 It was so foggy we could barely see the mountains, and at times they disappeared. 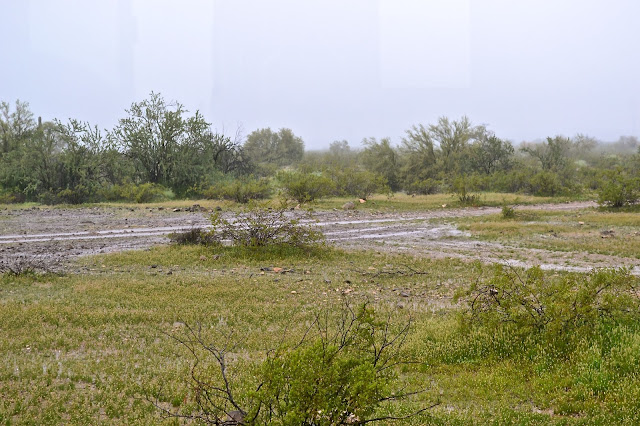 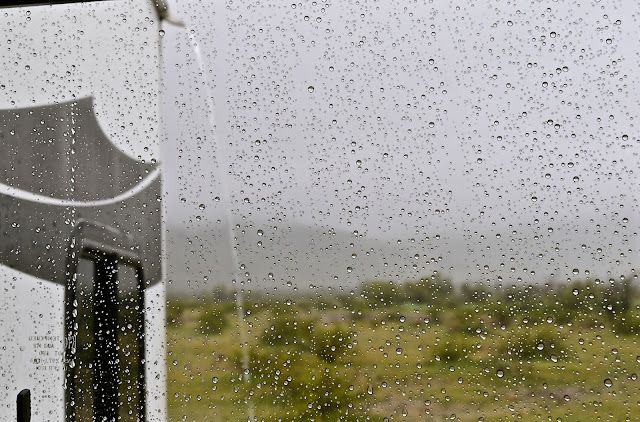 You can see it pouring off the roof of the Igloo. I took this through a rain soaked window but you can see the stream off the roof.

We left Saddle Mountain BLM yesterday, Monday, Feb 24, stopping at Saddle Vista Ranch to dump our tanks and Wintersburg to top off the Big Dog's drinking bowl. By 10 AM we were on our way because we only had a couple of hours to drive, around the 100 mile mark. The plan was to stay at Why, AZ for a couple of weeks but those plans didn't work out. No cell service from Bell Canada which teams with AT&T. So after a quick stop at the Why Not store, we continued our journey. 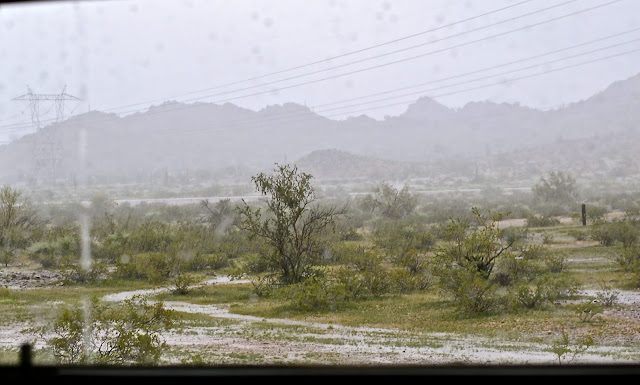 What appears to be a river is actually only a minor dip in the ground, it's just that everything is slanted in this area, a very slow gradual slant but it collects water easily 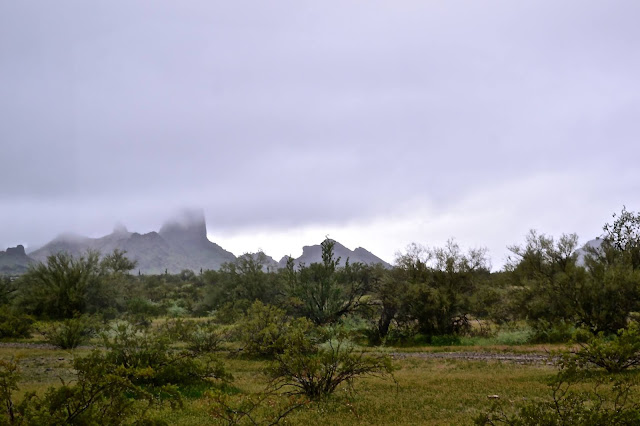 It tricked us a few times, looking brighter and starting to clear only to have more clouds move back in with more rain drops falling as well. 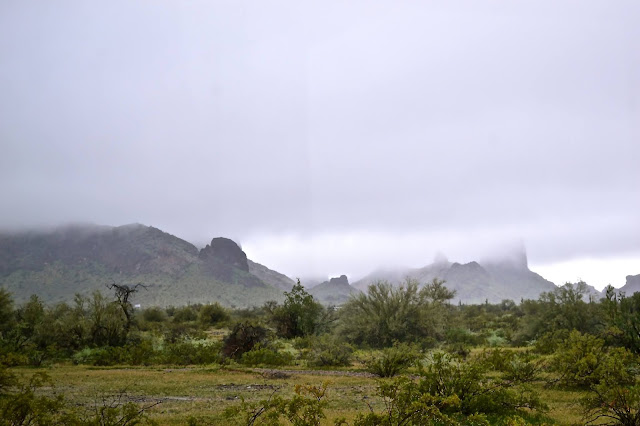 It's starting to break up now as you can see.
We haven't been to Why since our first year travelling to the southwest and one of the reasons is cell service.  We changed to Bell Canada last fall as it seemed to have better coverage of the southwest but I have to say, I'm not sure it's any better than our previous carrier. We parked near friends that year who had service with Bell Canada and could use their phone. Now being fair to Bell, we didn't try T-Mobile connections until we were a few miles out of Why, but I'm pretty certain it would not have worked anyway. So we've written Why, AZ off as a place to visit in the future. 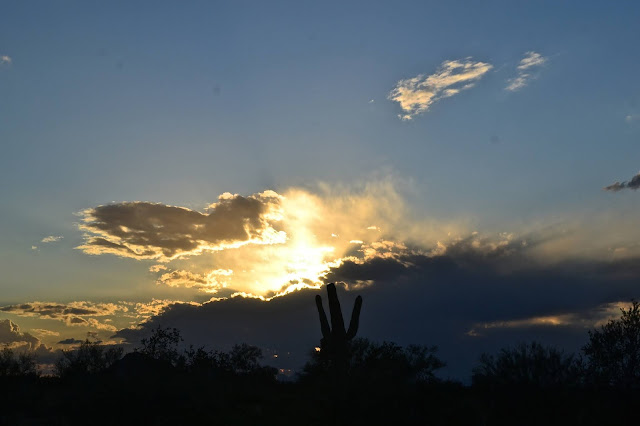 The sun finally came out. 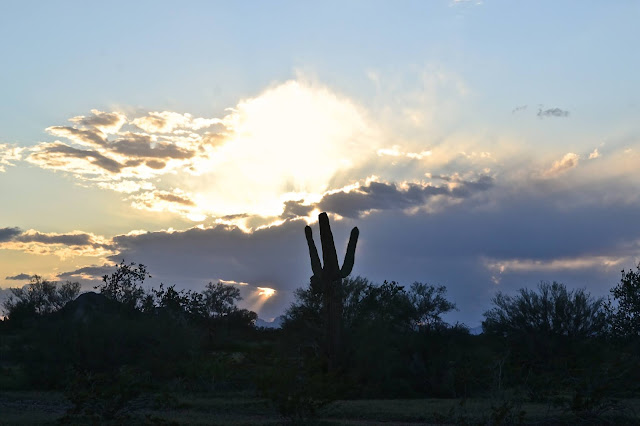 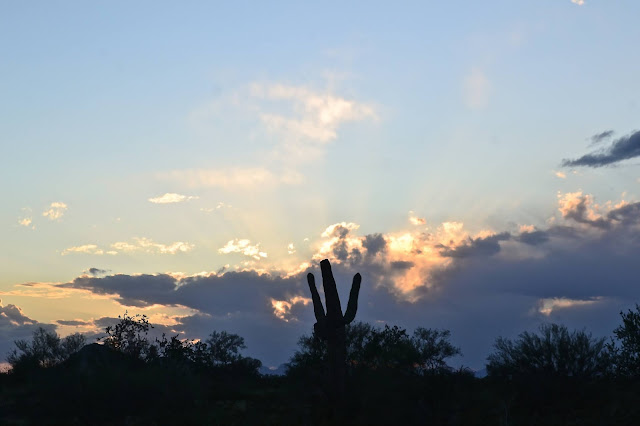 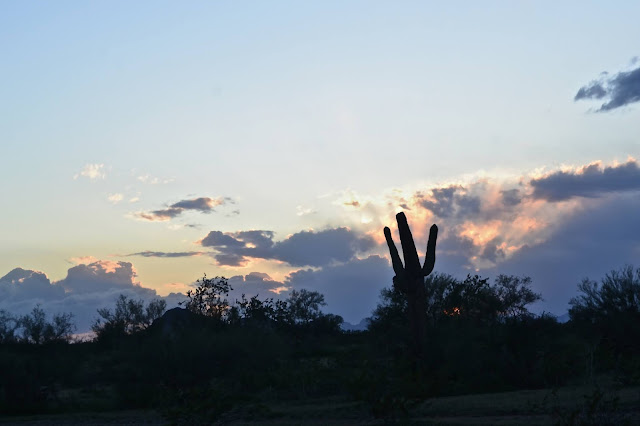 I love the drive between Why and Tucson. There are so many varieties of cacti to see. Prickly pear, teddy bear cholla, buckhorn/pencil, barrel cactus, saguaros and a lot more that I'm sure I missed while driving at 55 mph. They are just haphazard along the road side, very abundant in places. The Teddy Bear Cholla looking almost like a small forest it's so thick in some areas. The saguaros looking like matchsticks as they are so plentiful. I would love to stop and explore but yesterday wasn't the day for that. 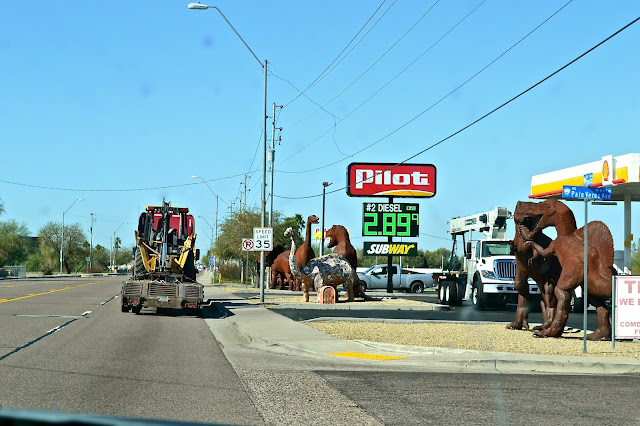 One would think I could remember the name of this town as they are so few on that drive, but the truth is, I can't recall. 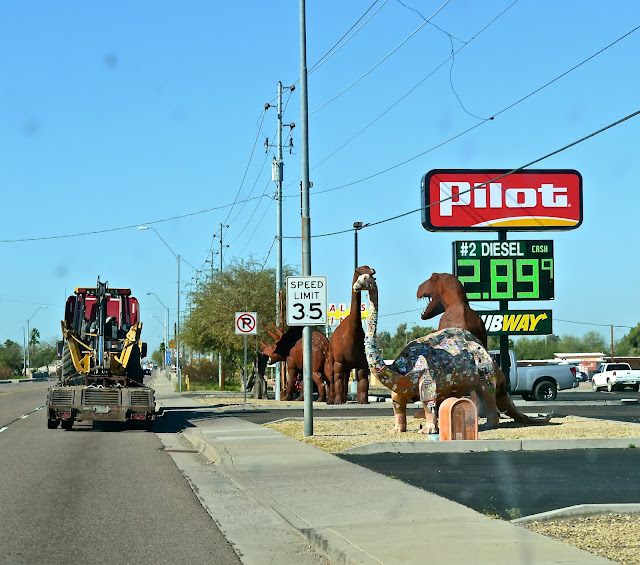 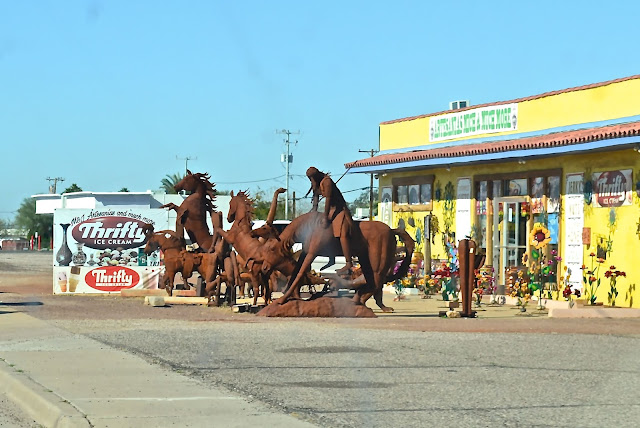 A bug splattered window makes its self visible in some of these photos.
A few places with slow downs as construction season is in full swing. Nothing too much, nothing too rough, and nothing too drastic. Tucson was a bit of a nuisance for a minute or two. The exit we wanted was closed and we missed the detour sign to catch it a bit further along. However we managed to go in a straight line for another mile or so and fix the problem. Yeah, we like easy fixes. 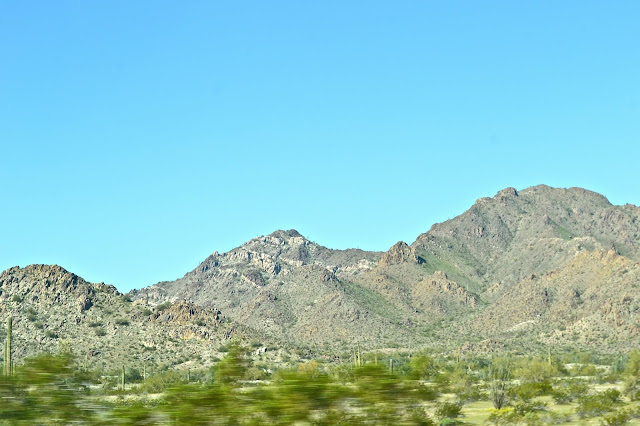 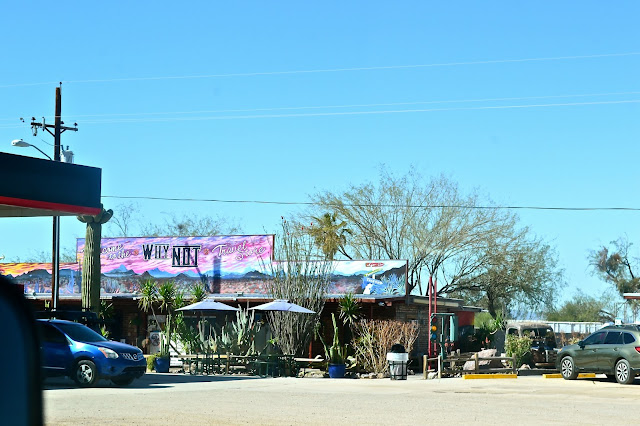 We stopped to check cell service, and had none. The Why Not store in Why, AZ.

The scenic route to Sonoita, AZ is a lovely drive but I didn't like hauling the Igloo along however it was much shorter than going all the way around to come in a less twisty, windy road. We found Empire Ranch easily as it was in the same place it was when we visited before.  However cell service was spotty on the way into the ranch house, so we dropped the Igloo there and with the Dogsled we ventured to a location where we have parked before. No service, no stay. We tried to go to a different area where the horse events are located but with a flooded road we decided to forget it. We called Dad from the area of the ranch house as there is cell service there, just to let him know we have arrived safely and will figure out the parking issue after the call. 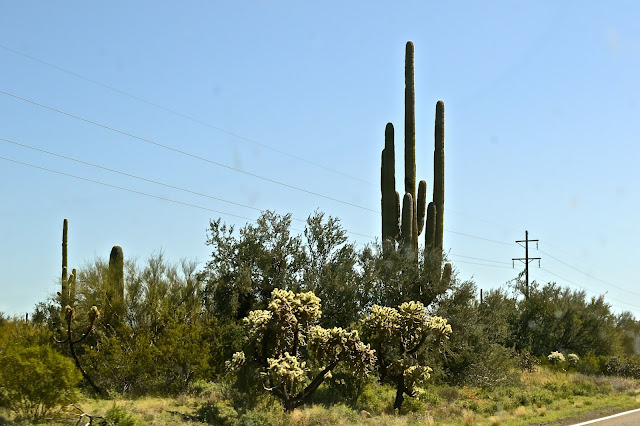 Saguaros, Teddy Bear Cholla, Prickly Pear, and on and on.
We had planned to park just one night between the ranch house and the road where cell service is good but with a spot for group camping and a kiosk. A flatish area near the kiosk would do for one night, but I decided I'd walk down to the group site to check it for a night. There are two other spots not connected to the group site, and so we parked in one of those, we have cell service and are close to the hard top road. Bonus!! At this point we are planning on two weeks here but we'll see how we do with the wind.
Chatted with a nice young fella for a few minutes. He had the strangest tent. His mode of transportation was a bicycle and the tent was excellent for his purposes. It was about 6 1/2 feet long and about 3feet or so wide. It fit him perfectly with no extra space. It was high enough for him to sit up with no issues.  Pretty cool but I didn't get a photo and he left before I opened the curtains this morning. 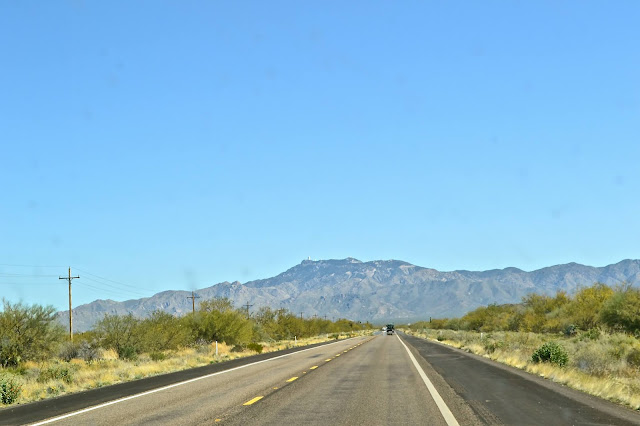 Kitt Peak ahead of us.
So we have now changed plans from staying in Why for two weeks to staying here for two weeks before moving on. We aren't certain where we will move on at this point but we will slowly continue our way east. 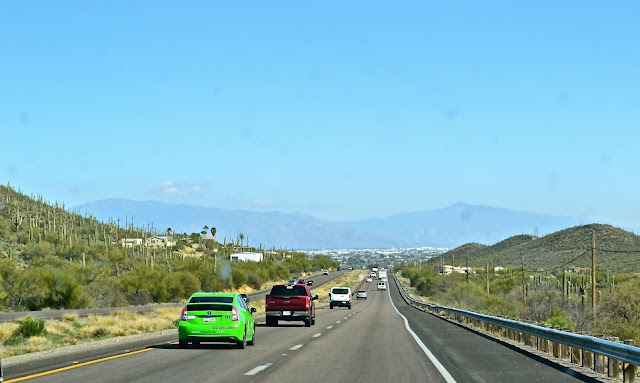 Yep, that is Tucson, AZ ahead.
Thanks for stopping by, we hope you are all having a wonderful time, doing whatever it is you are doing and being where it is you are.
Until next time... take care, be safe,
Deb