Our Location: Empire Ranch, Vail, AZ
Don't you just love quiet days? We had a wonderfully quiet day with a fantastic visit in the afternoon. It made a perfect day, just more perfect. Friends Deb & Tom ( Celebrating the Dance) dropped by for a while around 2 and before we knew it the clock was hitting close to 6 pm when I came in after watching them make their way back to the main road. The time slipped past without any effort. Laughter, chatter, and travel plans filled the time easily.  We didn't take a single photo, we were just too busy. 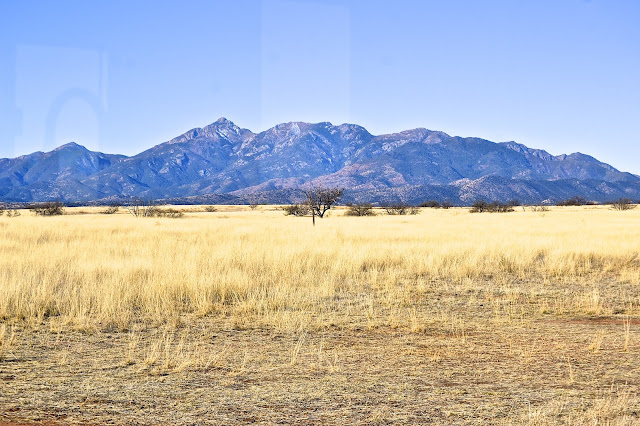 Sorry for the reflections, but I love the view and it changes often with the light and I simply snap the photo from my chair instead of putting on my shoes and going outside, so I get a reflection. 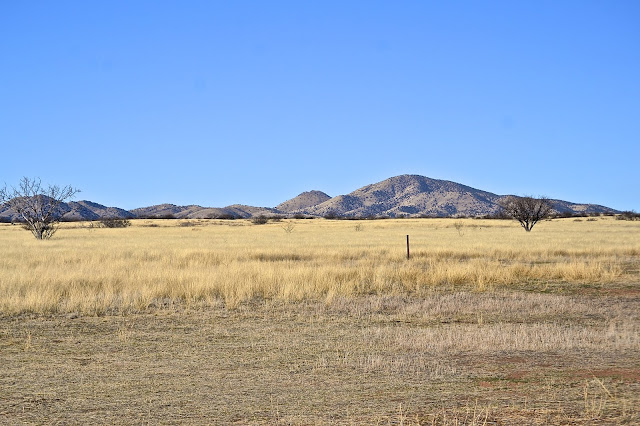 Mounds are over there. 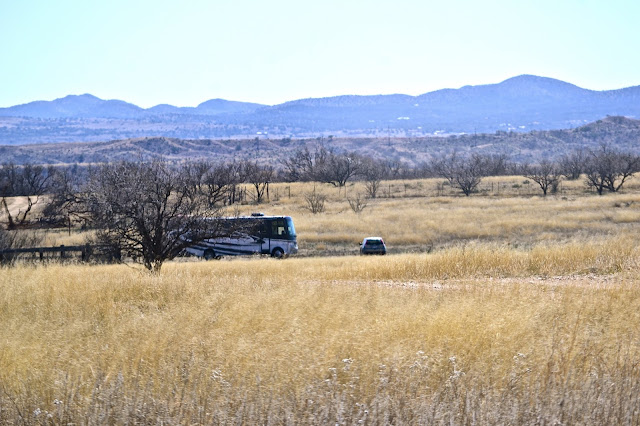 Those folks parked in the turn around loop.
A visitor ( I didn't get his name) pulled his little Outback right up beside the Igloo yesterday afternoon and begins to tell me that we may have to move due to a Youth Shoot on Saturday. I finally picked out the facts that he has no idea if we have to move, or if we can park by the ranch house for one day, and in fact, I'm not sure he really knew much of anything except that there is a shoot here on Saturday. Bird shoot. The fella was nice enough, and explained that he brought his dog Princess out for a quick peek at the location. The man is not a spring rooster by any means and when he called it a Youth Shoot, I assumed that to mean young folks. I asked if he was one of the organizers and his reply,"No one of the participants." It should be interesting. 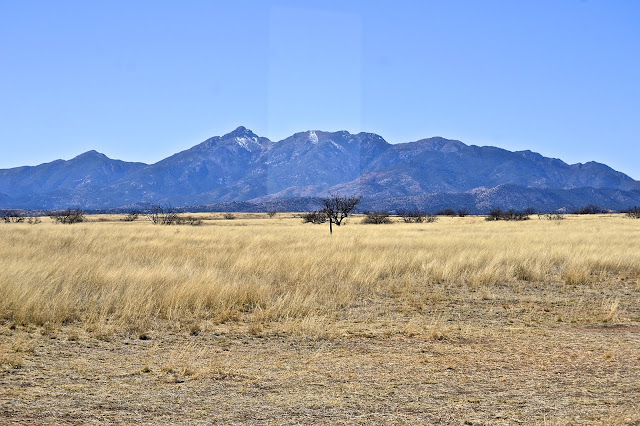 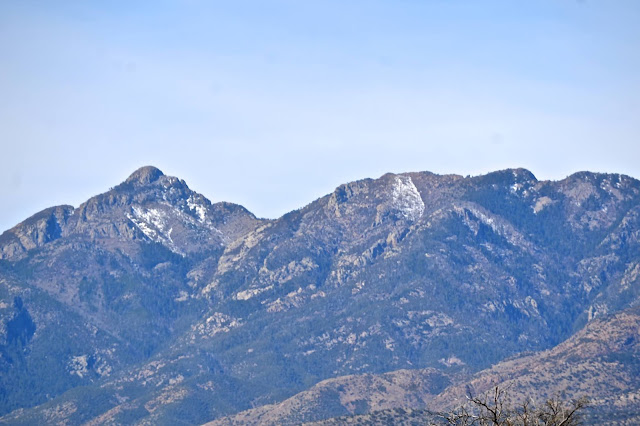 I am pretty certain that is snow up there.
Riley and I are debating about staying here due to the cool crisp air and the fact that snow showers or snow may be in the forecast for Monday with another cool day on Tuesday. We may take the Dogsled and do a run back to Why just to check out the cell service again and to get us into a bit warmer climes. However we are just thinking about it at this point. 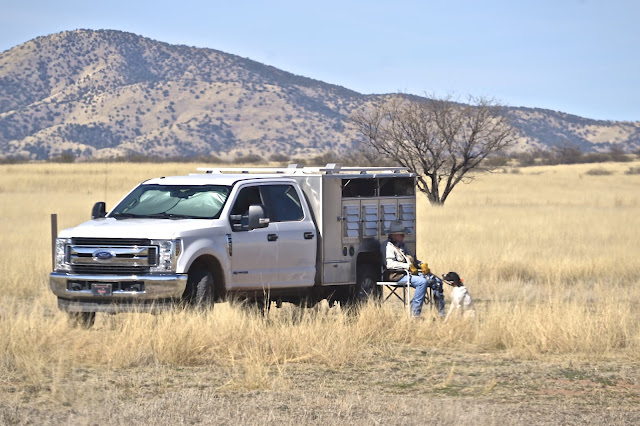 These guys have been out here on two different days. I think they are practicing for the Saturday shoot as well. Maybe I misunderstood the gentleman and it's not a 'youth' shoot but something else because these fellas aren't youths either. 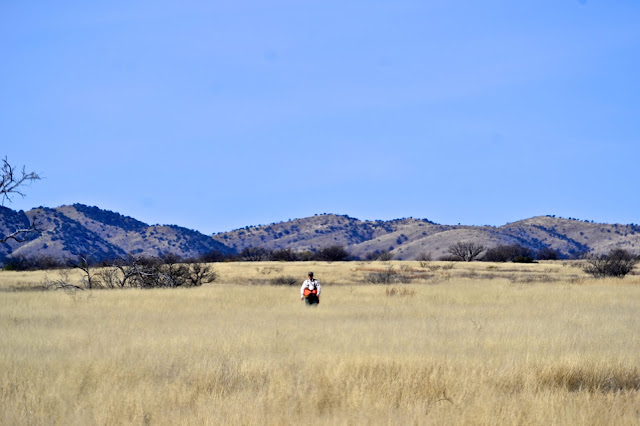 This fella went out twice without his friend and the dog. I think he was putting birds out. When he returned the two men and the dog along with a shotgun went off in the direction he'd just returned from. Soon we'd hear the gun and a few minutes later we'd hear it again, and before long they were returning. 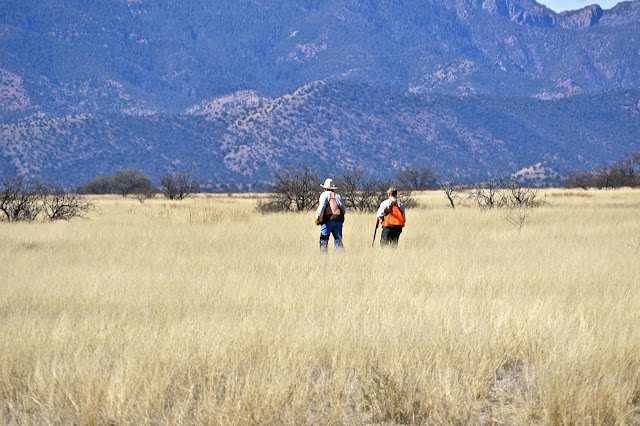 Orange vest has the shot gun.
I called Dad last night. Seems the flu is going around up there on the big rock and  places like hospitals, nursing homes, etc aren't allowing folks to come visit the residents as they are trying to keep the flu under control. Like Al & Kelly ( The Bayfield Bunch) over there in that Bayfield place,  the island is also in the middle of a big storm. Strong winds, blowing, drifting snow and all that good stuff that the north gets during the cold months. 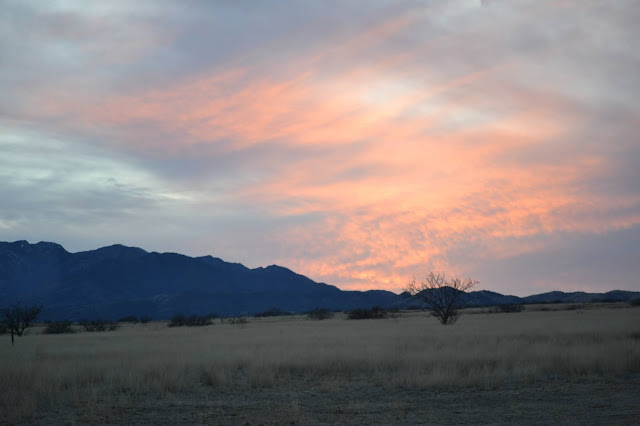 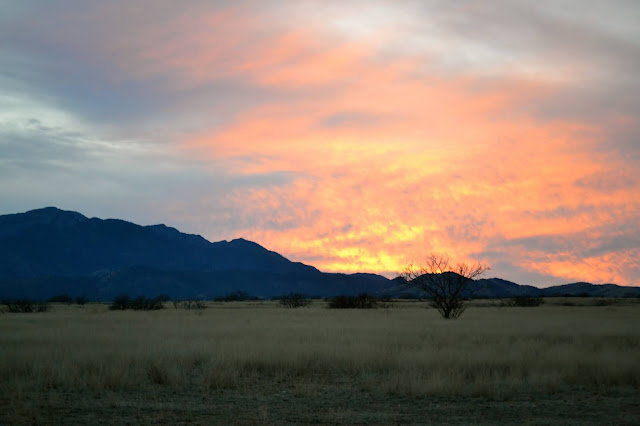 Sunset last night.
Thanks for stopping by, I hope you had a wonderful day.
Until next time... take care, be safe,
Deb