We are back in the Ogilby Road area.....

Our Location: BLM off of Ogilby Road, Winterhaven, CA
A rather peaceful night at the Red Earth Casino. We both slept well and were ready to go early this morning. We enjoyed seeing the Salton Sea out our window. A quick chat with dad and we were out the door and climbing into the Dogsled. We were on the road by 9 AM and heading south once again.

As I said yesterday I'd give a bit more information on our issue of the last few days. We had to replace two tires due to an alignment issue that appeared withing a few short hours. A bent bolt in the spring which goes to the U-bolt around the axel snapped off, the bushing in the springs were worn as well, so the two combined to make a very serious wear issue on one tire and a slighter but still noticeable issue on the second tire. I discovered this problem on our way to Joshua Tree. We had to have someone come to change the worse tire and put on the spare. We then made it to Joshua Tree National Park, sat there until after the holiday's were over and we could get into a shop. I called a number of places, explaining my issue and they kept giving me other numbers to call. I ended up calling Danny at Pacific Brake and Alignment on Indio Blvd. He agreed to check us out the next day, which would have been Thursday, Jan 3. We arrived around 8:30 AM at his shop, he inspected the tires and issues, parked us up close to his shop and began work. He quickly determined the issues and explained them to me. It was multiple little things that should have been taken care of before I bought the rig.


The bolt that goes through the spring and into the U-bolt was put in upside down, it was also bent, which he said looked as it has bent for some time. It snapped off, which allowed the U-bolt to move slightly on the axle. With the worn out bushings the spring wasn't in proper alignment the way it should have been and it caused the wear on the tire. The wearing issue happened due to the bolt breaking. For anyone that has driven the two roads, Salton Sea Parkway and  CA 86 you know it's impossible to judge any thing that may be wrong due to the condition of the road. It is rough and humpy, bumpy, grooved in placed  as well. So I'm not surprised I didn't notice any difference in the handling of the rig. Everything was fine before we headed out of Borrego Springs. I am guessing that the bolt simply snapped off when we went over a bit of rough ground even at a slow speed.

I asked him to do both sides and so he had to order some parts. The first day Danny basically took apart one side to ensure he ordered the proper parts and the rest of the day was a waiting day. We overnighted there and on Friday morning the parts arrived. Danny immediately went to work and worked all day on the Igloo except for an hour's lunch break. He finished the repair work around the 5 pm mark but still had to put on the spare tire, write up the bill, etc. So we left around 6:00 pm Friday night. I would highly recommend this shop and this nice man. He was very courteous and friendly, helpful and knowledgeable. His is a very specialized shop in which he can do many things in house to help in the repair of your vehicle. 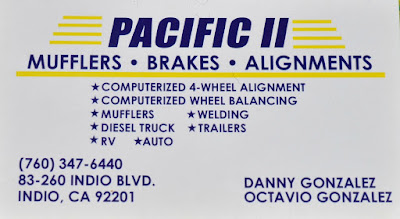 Back to today. We left the Casino under cloudy skies and they remained cloudy all day. Rain drips and drops off and on during our drive but rain has now been light but steady since our arrival here off of Ogilby Road. We stopped in Brawley for two reasons actually. We wanted to stock up on produce and fruits while in California as we are still in California and won't worry about Agriculture inspections now. The other was to just get a bit of a stretch as well. The cold weather has been bothering my arthritis a bit and I find that getting out and walking, stretching helps some.

We decided to head back to the Yuma/American Girl Mine Road/Ogilby Road area due to weather. It's warmer here by a few degrees and we aren't in any hurry to get to Quartzsite where it is no warmer there than what we just left. We are thinking we'll stick around for a couple of weeks until things have warmed up a bit further north and then we'll mosey along in the general direction of Quartzsite. Not sure where we will end up but at some point we think we'll be that area. However as we know, plans change and any thing is possible.