Our Location: Palm Canyon BLM, KOFA NWF, Arizona
As you can see we've moved. That was yesterday of course. We pulled out after saying our goodbyes to Doug & Yuma (Miss Adventure Travels) around 9 am and heading toward CA 86. It took us a while to reach the roadway but once there we travelled only a short distance of a couple of miles and stopped at the Red Earth Casino where we made use of their dump station. We used the middle one, which worked well after a swipe of the credit card. Some fella behind me said the other two didn't work but I can't verify that. 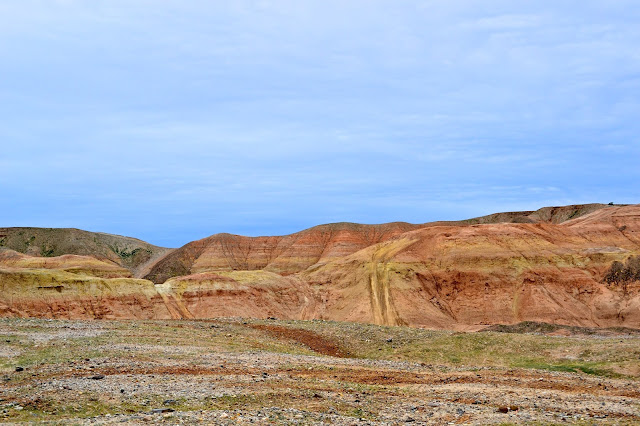 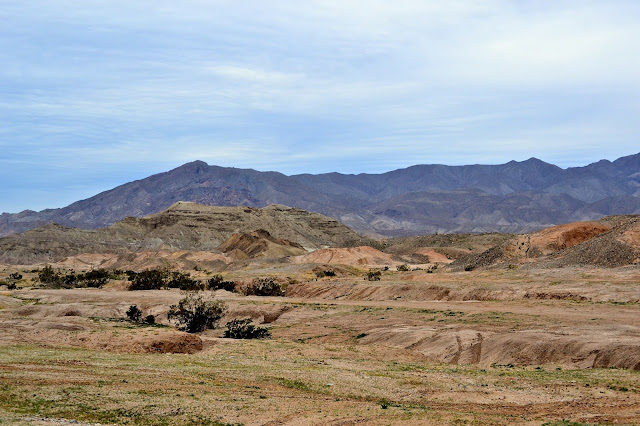 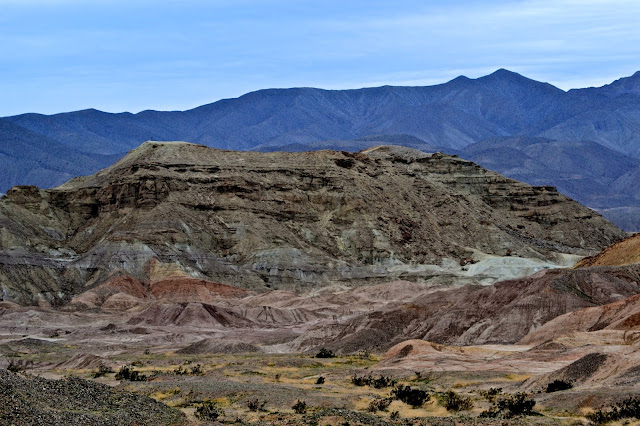 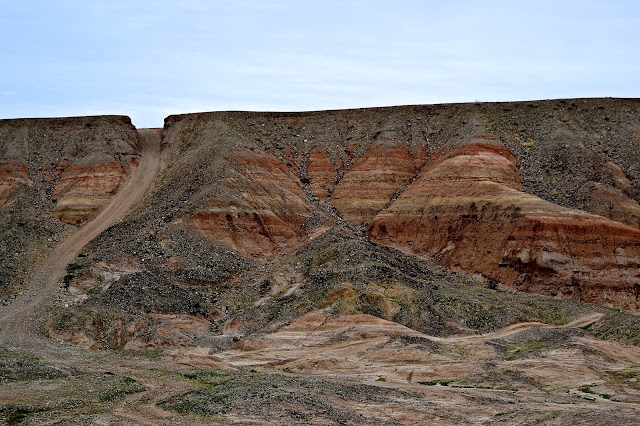 A few days ago I took photos from the other angle, looking at where I'm now standing.
Today's photos aren't of our travels but of my last hike in the edge of the badlands on Monday morning. I'll catch up with the photos some day but just not today. 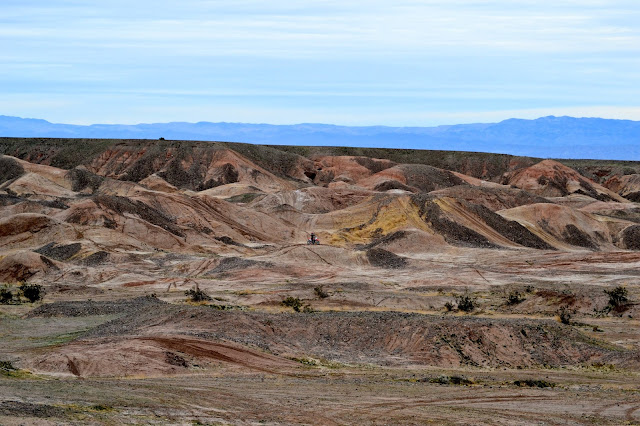 Can you see the person on the bike down there? Right in the middle of the photo. 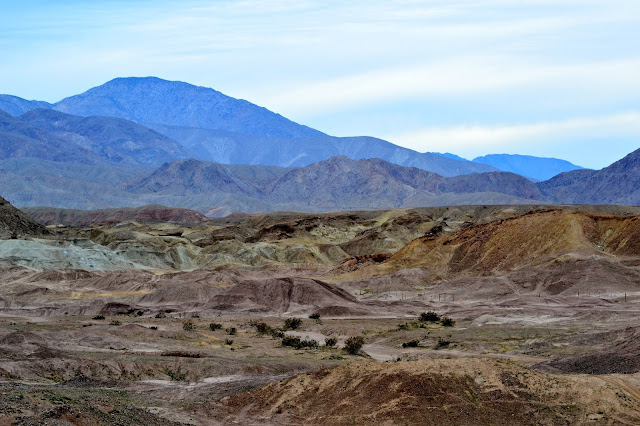 Lots of green tinges out there. 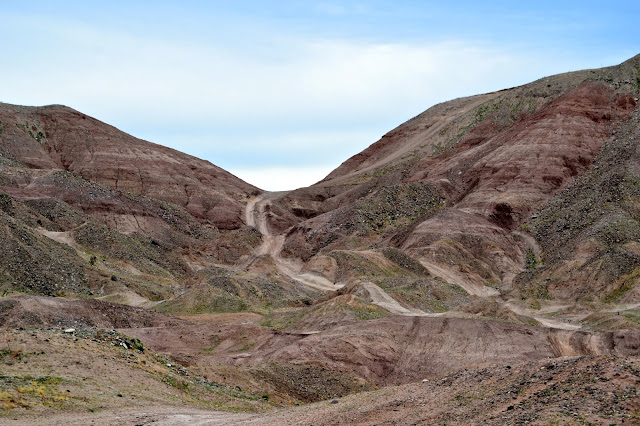 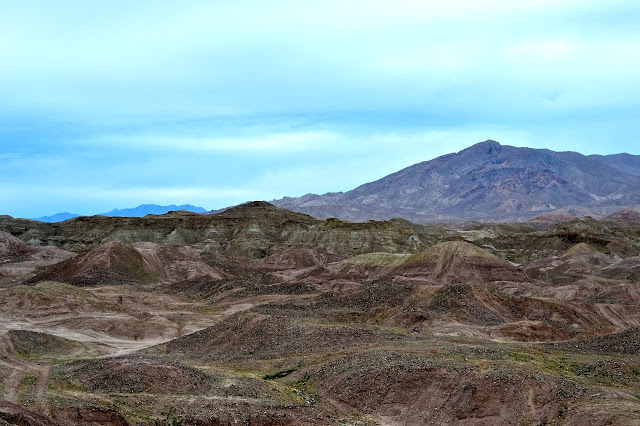 Lots of up and down while walking here.
Our travels took us through Box Canyon Road near Joshua Tree NP. Last year Box Canyon Road was closed due to severe flooding in the fall of 2018.  It reopened in May of this year. 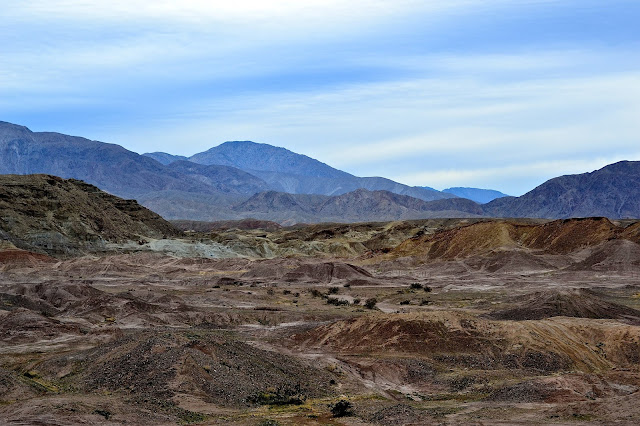 I can't imagine trekking through here for longer than an hour or so, at least on foot. Horseback would be interesting but I think you would need to rest the horses often. Still amazing to see. 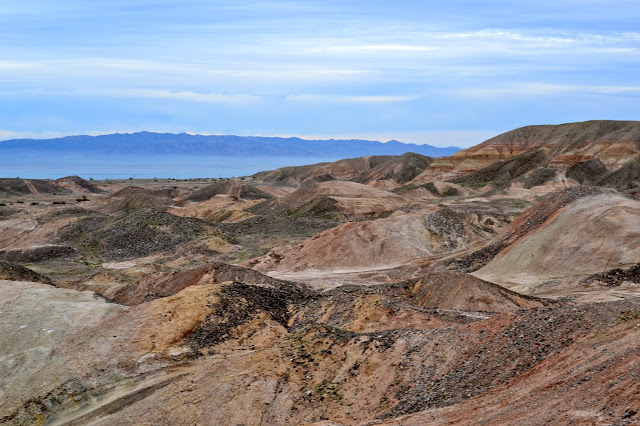 That is the Salton Sea you can see off in the distance. 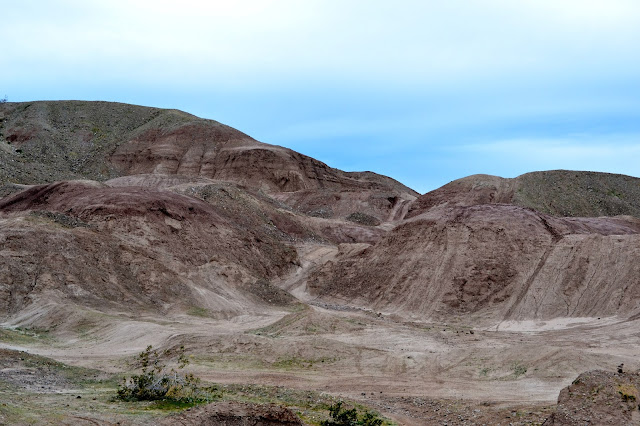 They don't look it but those are pretty steep climbs and in some places almost straight up with only bare hard packed sand, like cement showing in the tracks. 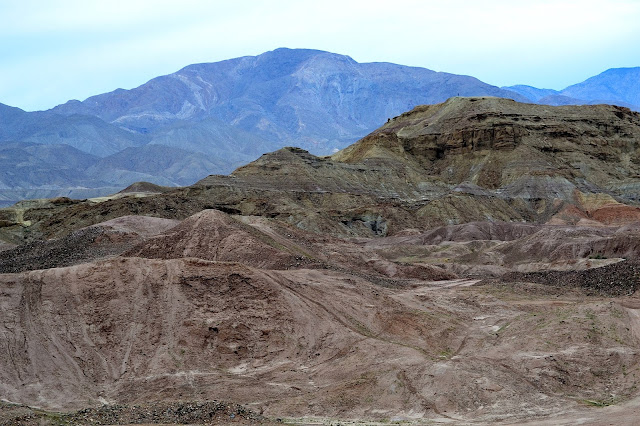 We crossed back into Arizona which means a time zone change for us and so we are now 2 hours behind Ontario, Canada. The drive thru Quartzsite to catch AZ 95 south bound was busy, bumper to bumper with a 5 minute stop and go, stop and go until the light and then we sailed along pretty well. We will at some point visit the big tent while in the area. 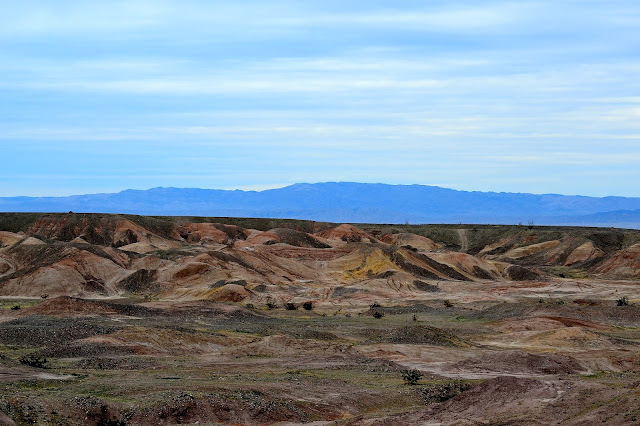 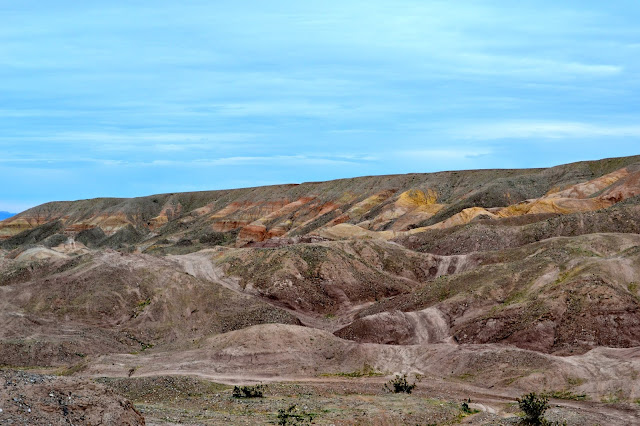 On my last walk through here I was looking in the direction that I now stand. Things look very different from this angle.

I was too tired to walk closer but I'm sure it would have been interesting. 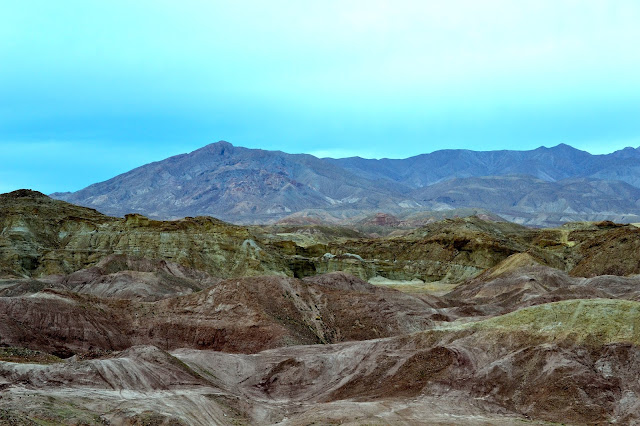 The colours are different back here, less reds, more grays and greens, off browns.
We reached Palm Canyon and turned into the roadway. Stopping at the first off branch but couldn't find anything we could fit into. Continuing on we both agreed, it's a beautiful place but the main road in from the road leaves a lot to be desired.  If I say it's pretty rough, you can bet it is pretty rough. We parked in a location that wouldn't normally a place we'd park but due to the rough road we agreed it was far enough. We have a beautiful view of the KOFA mountains out our window though. Isn't it amazing how many colours are in this photo? 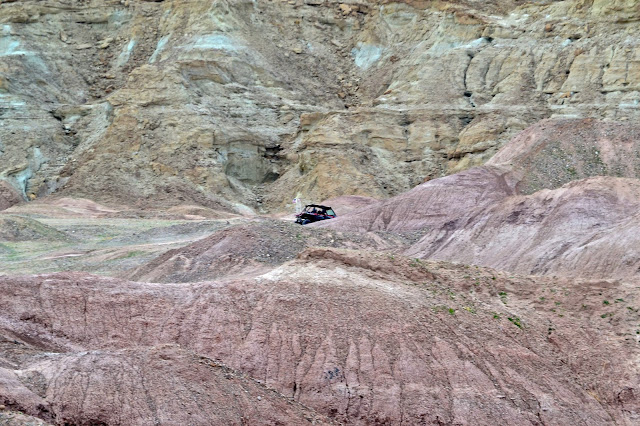 Now I'm certain that would be fun!! 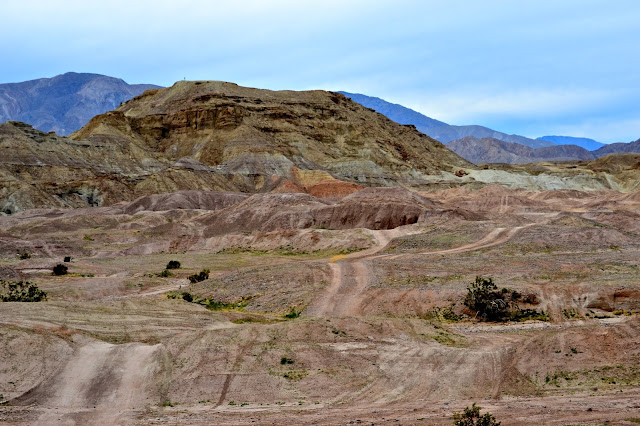 I would love to stand on the highest point and look down but I'll settle for this one. That greenish coloured hill is called Telephone Hill. Apparently some one put an old fashioned telephone booth up there. I didn't see it and I've been told it's very dangerous to climb to it. 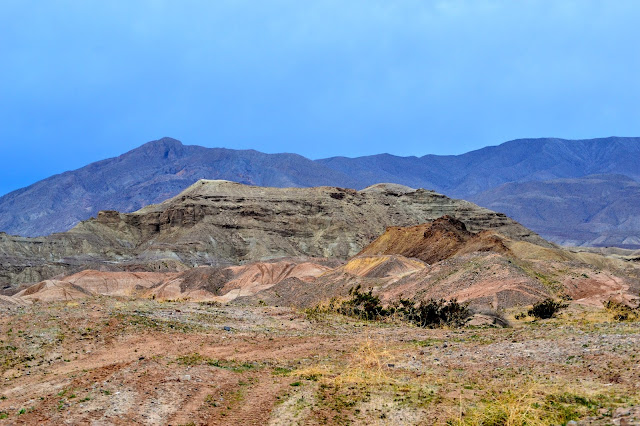 The desert is perhaps one of the most beautiful and inviting places that I've ever visited. It is also dangerous, cold, stark and standoffish. Perhaps a Jekyll and Hyde thing.
A call to dad once we reached our end spot and chatted with him for about 15 minutes. Catching up on the news and the weather back on Manitoulin Island. 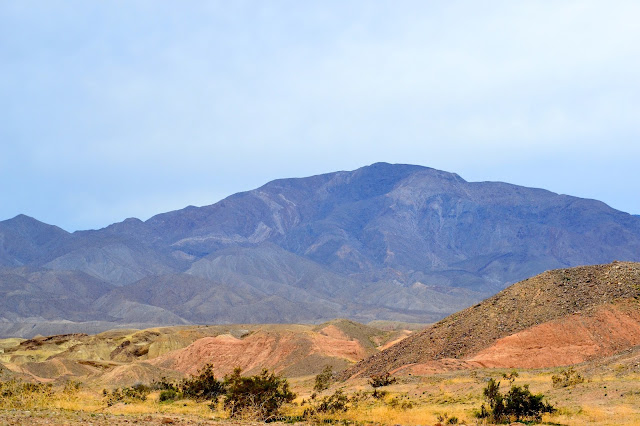 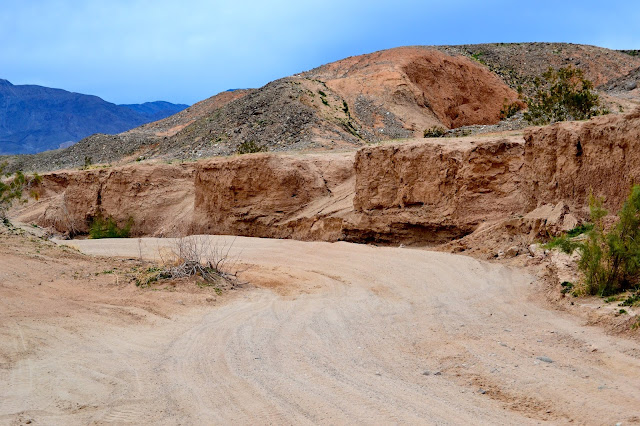 I opted for the wash on the way home, faster and less hills or up and down but harder in some ways. Loose sand, more curving and not as breezy meaning it's easier to get warm and stay warm without cooling off. 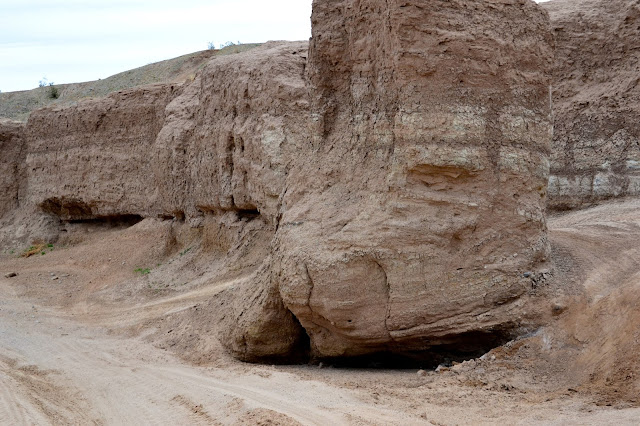 I wonder how long that will stand before it crashes into the wash. Between the undercutting from water and wind, to the pressures of being ridden over/around by Razors, Quads, dirt bikes, and such, I think its days are limited. 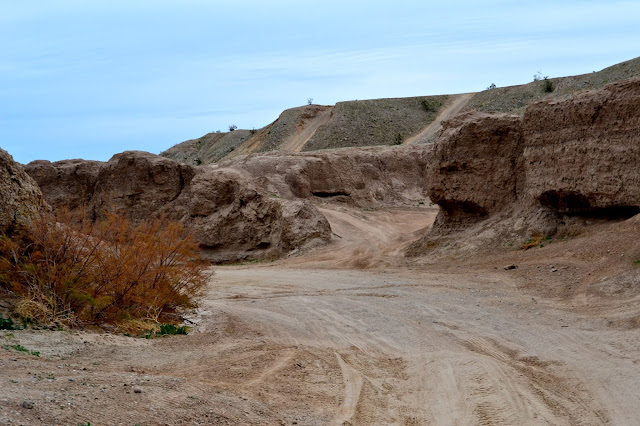 A very special birthday wish today to daughter Courtney. She turns 32 today. She is the oldest of my three girls. Courtney is a bubbly person, always smiling and easily excited about things of interest to her.  She has an enthusiasm that is hard to beat. Courtney works in Toronto doing before and after school programs with children.  She also tutors in both english and french. Happy Birthday Sweetheart. 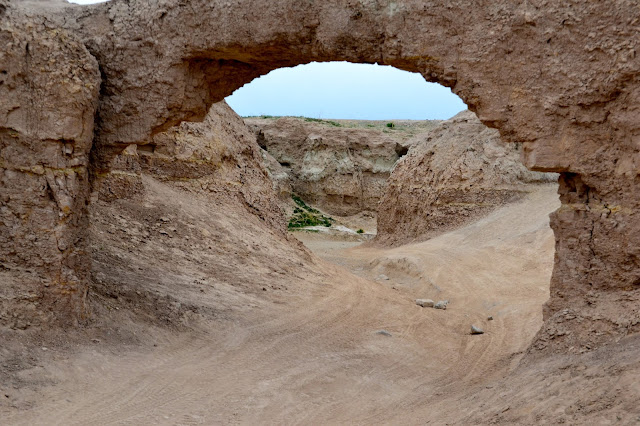 I've photographed this arch at least 3 times now, once with Riley, once with the sunrise behind it, and now empty. 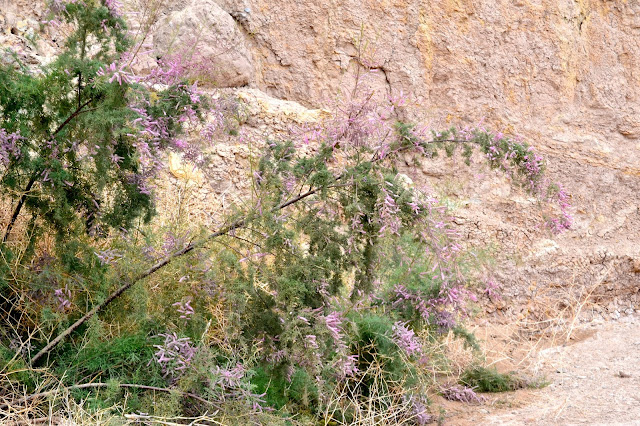 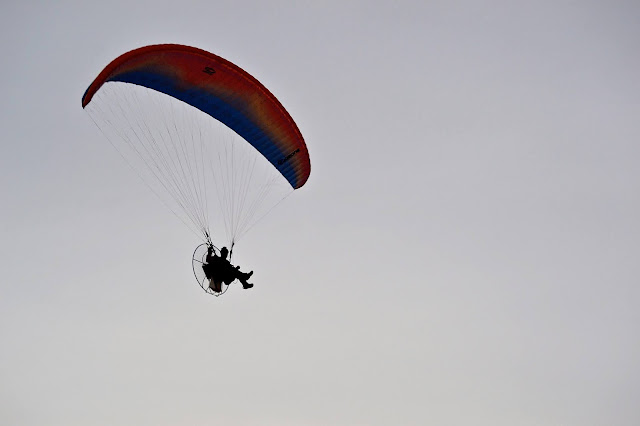 This guy flew over us on our last night at Truckhaven BLM. He wasn't very high and I thought he would land on the top of the mesa behind us but he didn't, he simply made a tight turn and headed back to the area between us and CA 86. I think he may have taken off from there as well.
So there you have it, our moving day in a nut shell. I hope you enjoyed today's photos (even though they have nothing to do with today's post but I want to have a visual memory of them for myself), I hiked a bit over 3 miles to get them.

Until next time.. take care, be safe,