Our Location: Truckhaven BLM, Salton City, CA
A quiet couple of days here at the Igloo. We enjoyed the views and this morning Riley and I headed out for a 3 mile round trip hike. I chatted with Dad last night and my sister this morning catching up on the latest gossip from back on the Rock. Later this afternoon Doug & Yuma arrived and are parked just a few yards from us.  I'll leave you with photos taken over the last couple of days. 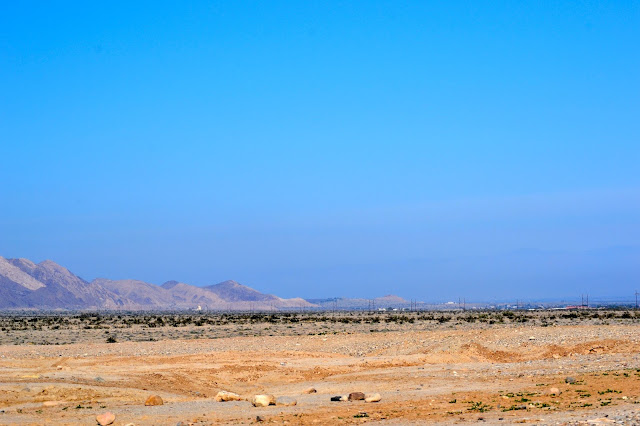 Haze always seem to hang over the area coming from Coachella. I believe it's probably pollution or smog but whatever it is, it is constant. 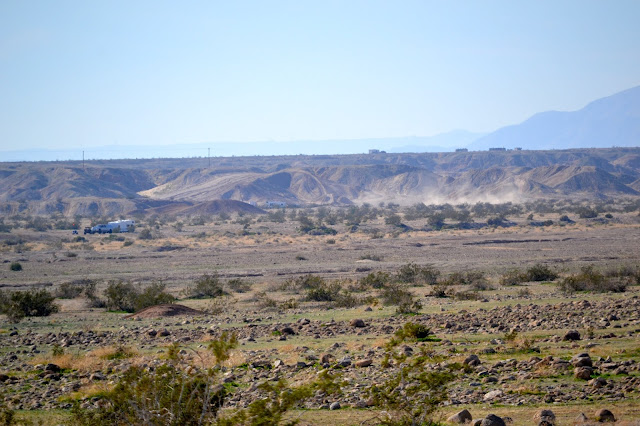 Those fellas are parked way off in the distance and I'm not sure how they got there. The dust in the background is from a couple of Razors spinning around. Up on top of you can see rigs along the Borrego-Salton Sea Parkway. 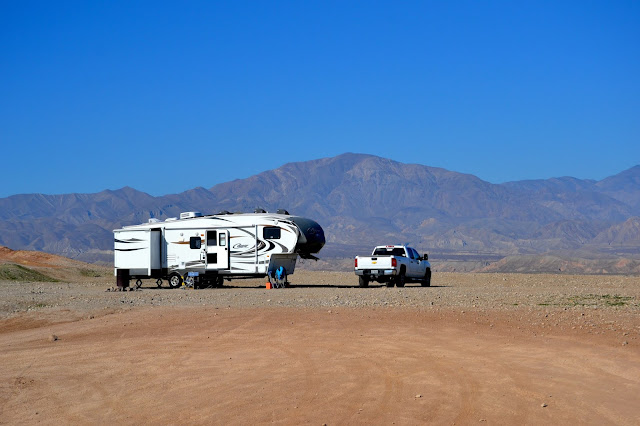 Can you guess who lives there? 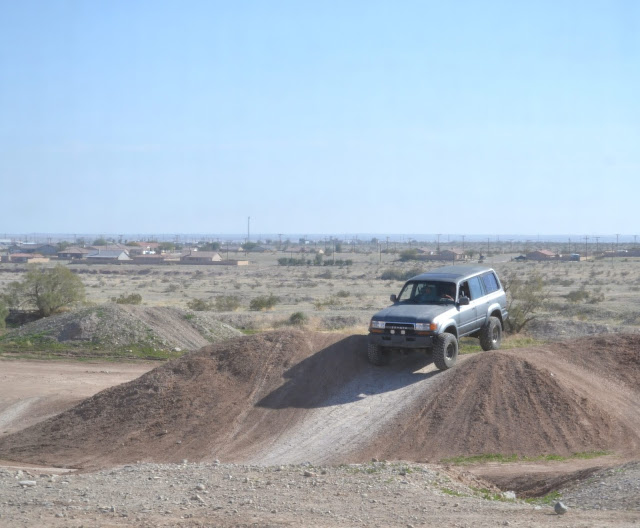 I stood on a hill top to the left of this guy to take the above photo. Not of course while he was up there. 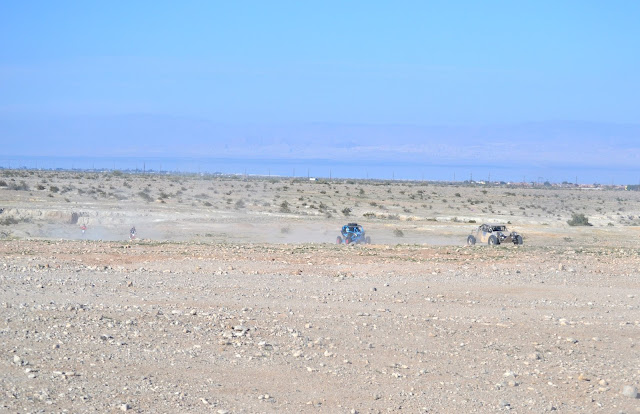 If you look to the rear there are two dirt bikes bringing up the rear and a third one was about 2 minutes behind.

The weekend folks are gone now and all is quiet today. Two jeeps went by all day and one of those only went one way, while the other made an in and out trip. 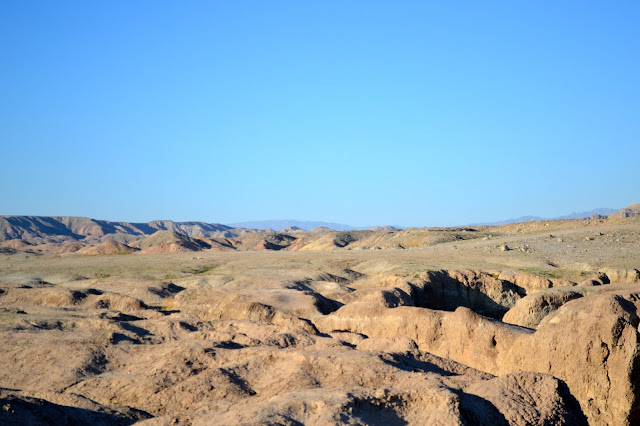 We went for a three mile hike this morning. As you can see it's not all flat. 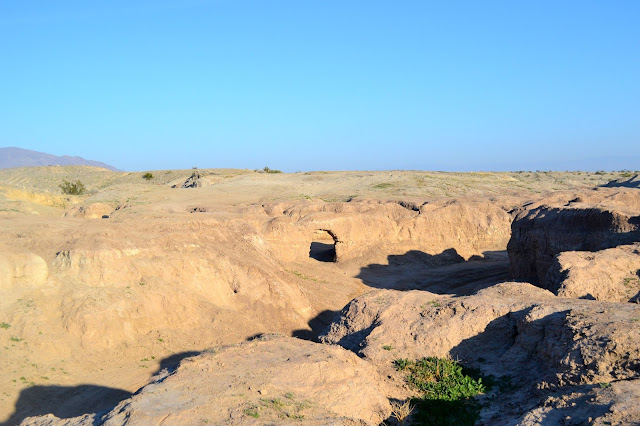 See the arch down there? The washes or arroyo's go on and on and on. 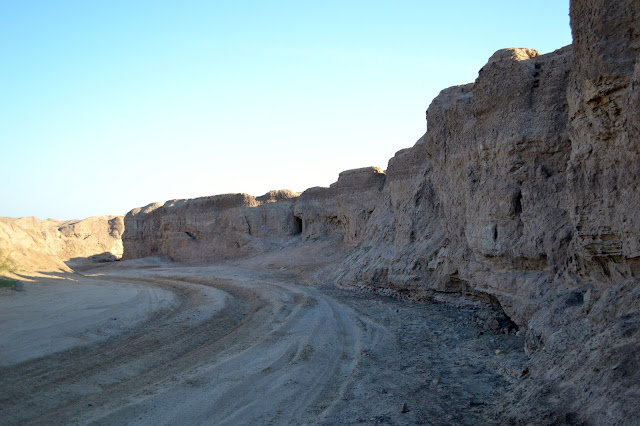 We walked along here for a bit. Not a bad climb down, we just followed the paths. 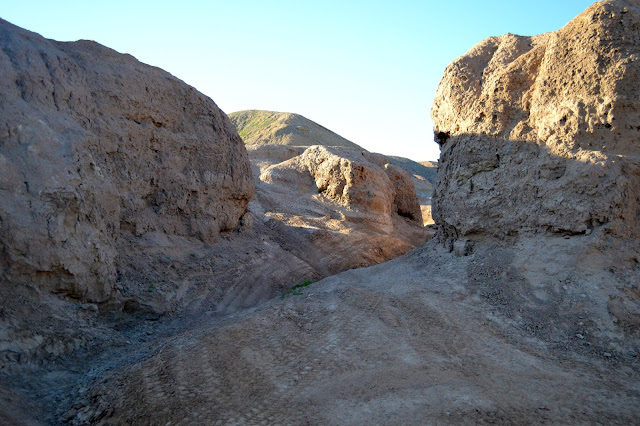 But NOT this path. 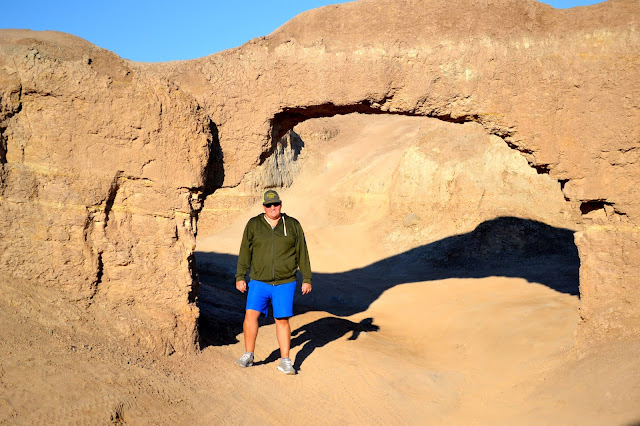 Some stranger I met while walking around down there. No, not really. Riley came with me. 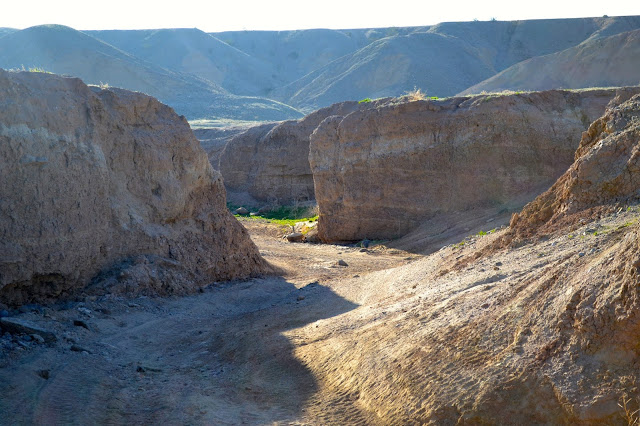 We walked out this way... 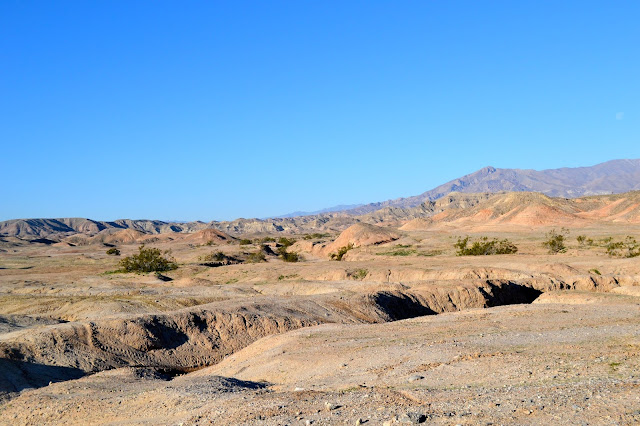 We climbed out of the wash and headed on into the badlands a wee bit farther. 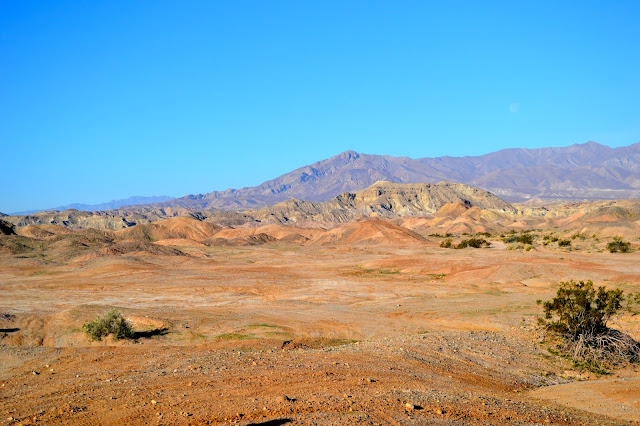 Some of the area is very hard sand, almost clay or cement like but so many washes run off here and there. 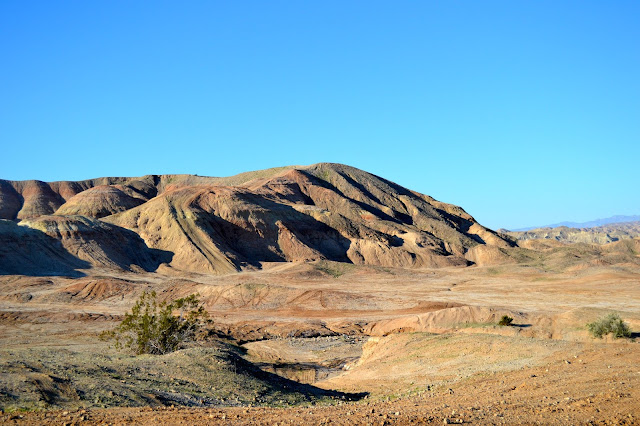 Trails everywhere, in all directions and all different adventures waiting for you. 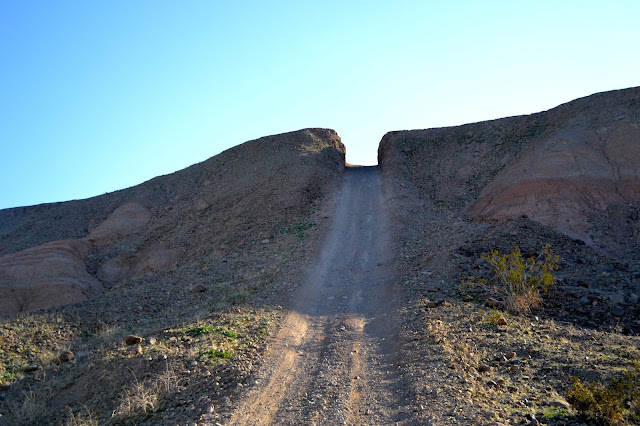 Very steep but well used as you can see by the slimness at the top. 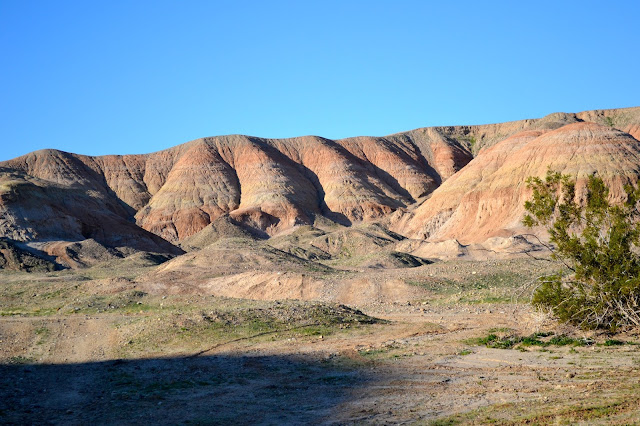 We started through the hills here, wanting to come out on the other side and make a loop back to the Igloo. 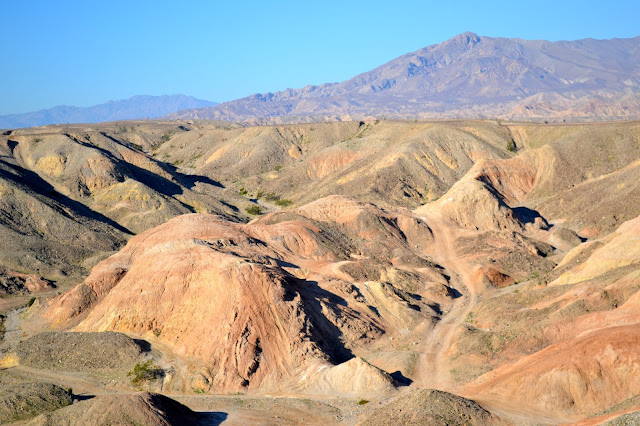 We eventually found a way to the top after a bit of a climb and came to a flat top mesa type area. The views were pretty nice. 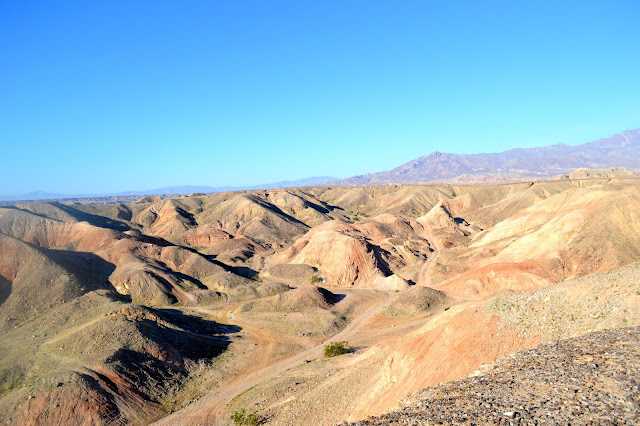 I can't describe the trails that wind and twist and climb in here. The paths in some places are almost straight down and are impossible to climb up or down on foot They twist back and forth thru the hills and curve almost back on to themselves. 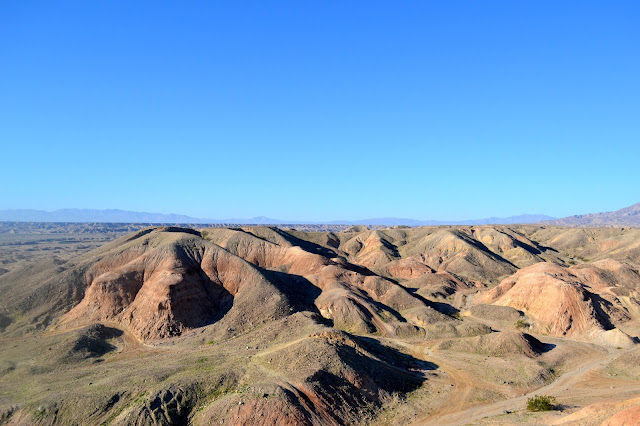 The green tinge is easily visible. 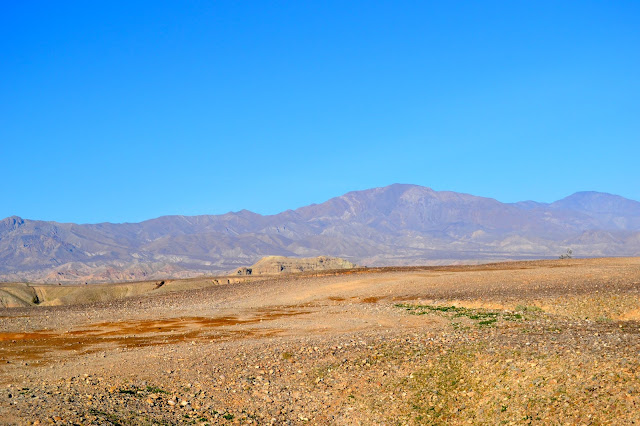 The mesa top ( I guess you would call it a mesa top) is flat for a bit and then slowly curves in various directions and all ways down are steep and rough. 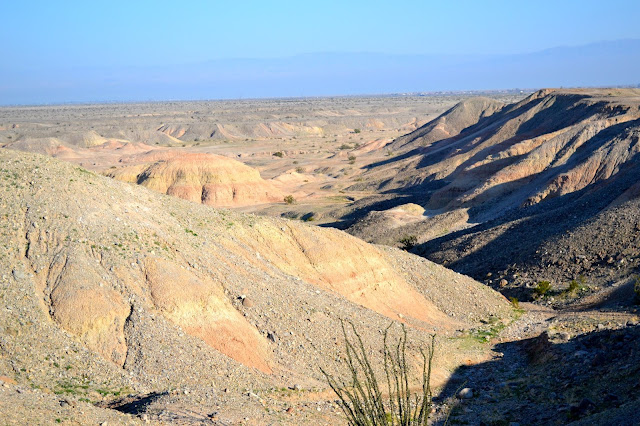 We came along to the right of the round red/white dome type hill you can see, then followed a path you can see at the foot of the red/white formation in the foreground. It curves off to the left where we climbed up a path that was filled with larger stones, made for easier climbing than the soft, fine sand and hard packed clay/sand that went almost straight up. 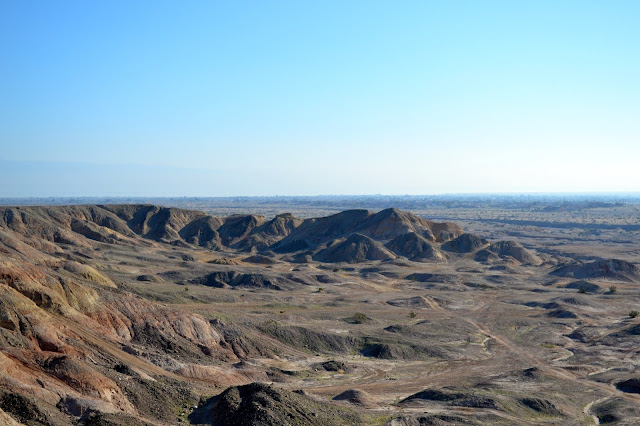 Easier walking now but we still have to get down some where. 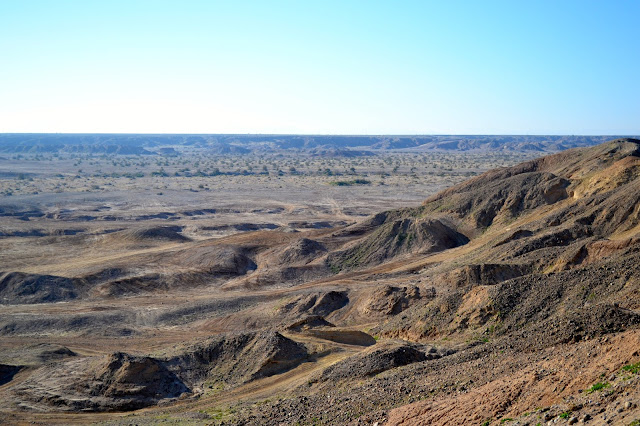 I think one could get very dizzy down here. 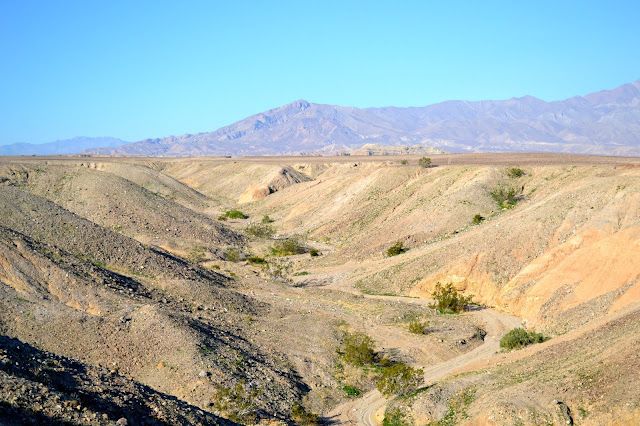 We came along the top of the mesa on the left hand side of the photo. Those trails are very, very steep and we were looking for a way down to the bottom to follow that wash. We never did get into it though. 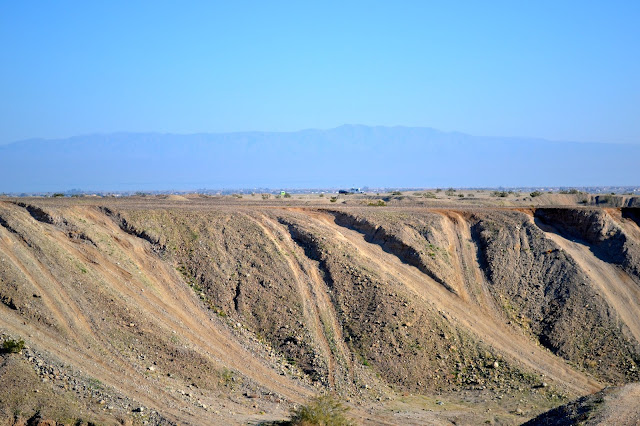 I imagine it gets quite busy here at times. 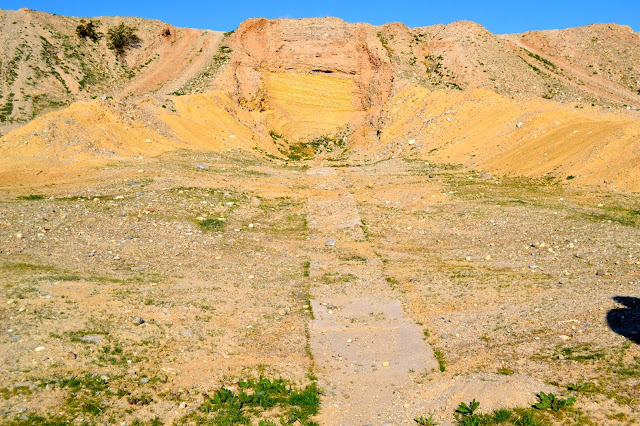 I have no idea what this is, but there are a few of them here. They don't seem to be lower in the middle like a drain to carry the water and they don't seem to end any where specific. I thought perhaps they were old sidewalks but truly I have no idea.
Thanks for stopping by, I hope you enjoyed the photos!
Until next time.. take care, be safe,
Deb