Our Location: Near American Girl Mine Road, BLM, CA
I missed posting yesterday, I was too lazy. So I'll just combine the posts now. How do ya like that? Two for one. A two fer. 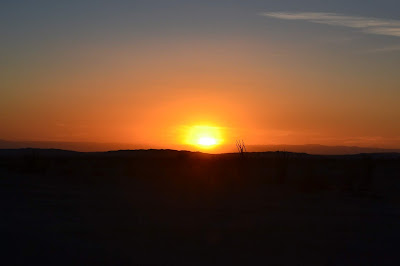 This was the sunset on Monday night. 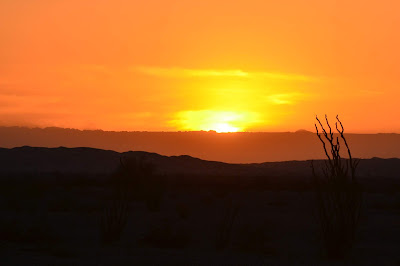 The sky was yellow and then orange.

It's been a bit coolish and more windy than not the last couple of days. It's not awning ripping winds but awning shaking winds. However we have tried the pool noodles under the big slide awning and it seems to help a great deal.  I think we need another noodle or two to actually make it stop all together. 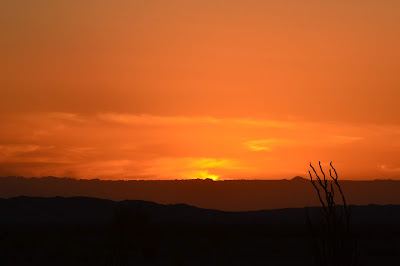 So orange with wisps of yellow here and there. 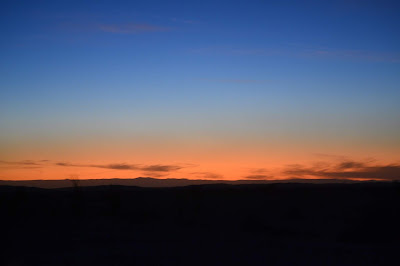 And much later it finally calmed until on the faintest line of orange was left.
Lots of sun the last few days. An amazing sunset last night, the light show was jaw dropping as you can see in the photos below. Yesterday our errand was to haul over to the Chevron to dump our tanks. We had debated about doing on Thursday but since we had to be at an appointment for 9:30 AM I thought it wise to leisurely dump the afternoon before, and we simply stayed hooked up over night. Much easier start to the morning with no worries of getting behind someone else at the dump station. 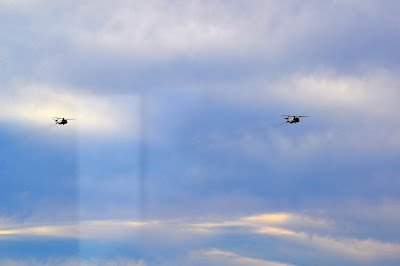 These two came flying by, quite low and certainly grabbed everyone's attention. 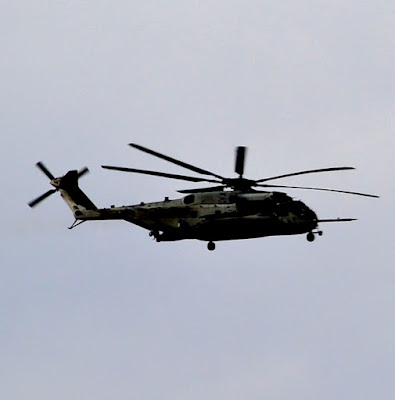 A closer look at the one in the lead. They weren't in a big hurry and I'm guessing they weren't much higher than the black hills over by American Girl Mine Road.
The Chevron fuel station at Sidewinder Road has changed their pricing policy for dumping. Last year it went by the length of your rig, this year it was a flat fee. In fact for us it didn't matter the price was the same but they didn't ask for length this year, and they also asked for ID to be left to ensure one returned the key. For future reference for myself they also sell firewood. This is a quick and easy dump station only a few miles from our spot and so we were back home with the feet down within the hour. We simply left the outdoor stuff sitting on our mat while we were away. Saved our spot and made less work for us. Chatted with my dad last night for a half hour or so, just catching up on the news. Wind, snow and cold seems to be the news of the day. Hopefully it's not as tough a winter as last year but it's starting out like it. 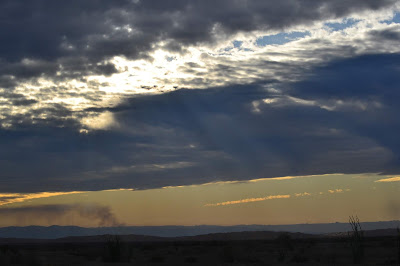 Earlier in the day the sun was peeking through the cloud cover and the clouds looked quite dark, but not threatening, almost like they were back lit. 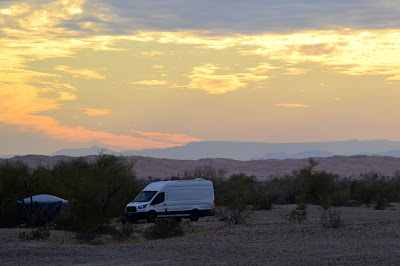 Off to the south of us the sky was interesting.
This morning we had an appointment at 9:30 AM way out in the Foothills at CJ's Repair on Tiffany Lane. We went there last year as well, I was happy with everything except the fact that they didn't seem interested in my issue because I didn't have their 'brand' of system. However interestingly enough, Jason remember me or us, and was interested in the fact that it hasn't really been fixed yet and suggested that perhaps if we had more time they could look at it. I said I'd keep that in mind. He remembered a number of things about us including the fact that Riley travels with me and that we dry camp most of the time.  Good memory! 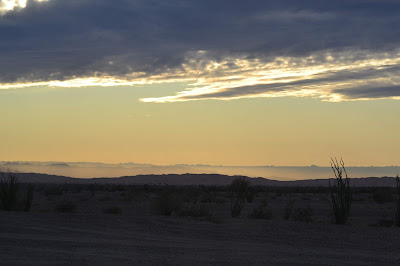 The clouds are getting more yellow at the edges. You can see a line of haze or something behind the dunes but in front of those far blue mountains. 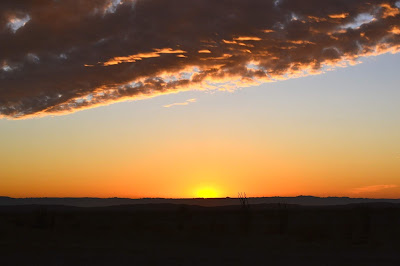 Dan was our tech guy today. We added two more batteries to our system, giving us 4 now. He rearranged the other two battery boxes as well, giving us a lot more space in our front compartment. A very nice fellow, seemed to know what he was doing, answered any questions I asked and took his time. Shop time is $105 US per hour. While Dan was over the hour we were only charged for 1 hour labour. We were heading home around 11:30 AM. 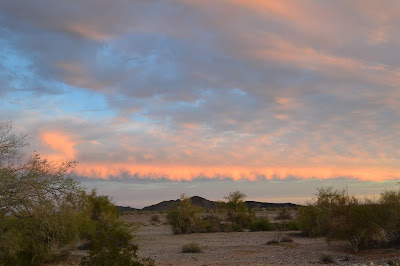 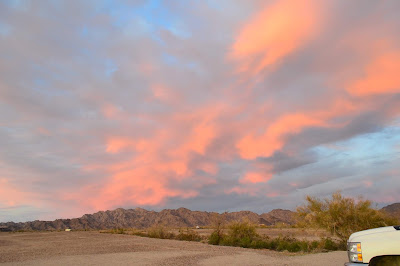 Looking north toward the mountains.
Back at our spot we were starting to get things ready to unhook and set up but no power. Nothing, nada, zip, zero. No landing gear, no slides, no lights, nothing. Hmmmmm... I called CJ's and explained. I spoke with Jason and assured him there were no loose wires, something simply not connected and asked for a mobile tech to be sent out. It was working when we left, it should be working now. About 45 minutes later, Jason himself pulls up to the roadway where I've been waiting to direct him to us. Within 5 minutes he figured out the problem and within 15 minutes he was pulling. One of the connector wires was completely taped over and the end was the wrong colour. It simply didn't complete the circuit, no damage, no foul. Jason changed the end to the proper colour, hooked it to the right position and bang we have power. It's all good. Big sigh of relief!!! 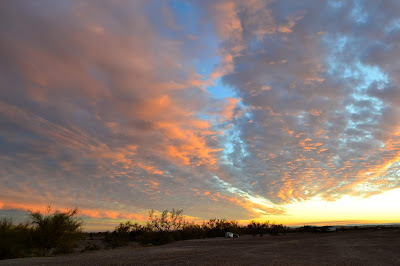 Now how can one not be awed by this sight? 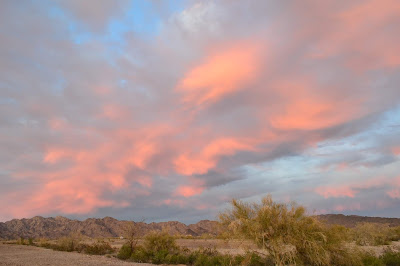 The sky was ablaze in pink, deep pink, light pink, crisp pink and fiery pink.
Within a half hour we were all set up again, and starting to entertain thoughts of lunch. A nice left over roast pork sandwich (from yesterday's lunch of roast pork, baked potatoes and a veggie mix -mushrooms, asparagus, carrots, celery) hit the spot. After which I spent some time reading, and writing this blog post. 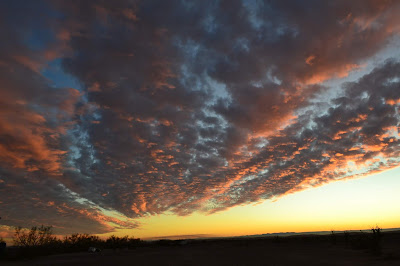 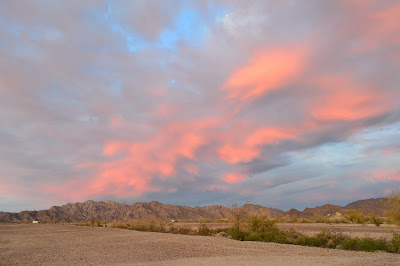 So now you are up todate with the happenings here at the Igloo. A busy few days for us, going, going, going. I think we'll take tomorrow off from any 'town' stuff and perhaps find a nice place to take a bit of a hike. I'm looking forward to that. 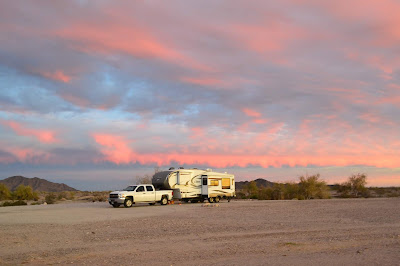 The sky is huge out here in the desert and you can see it's filled with pink clouds. 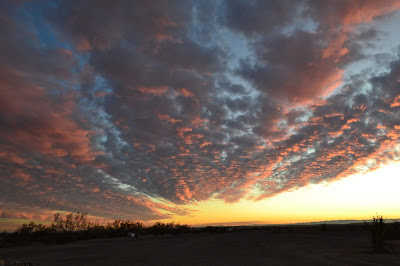 So beautiful.
So on that note, thanks for stopping by, I hope you enjoyed the photos. They are of sunsets taken over the last few days. 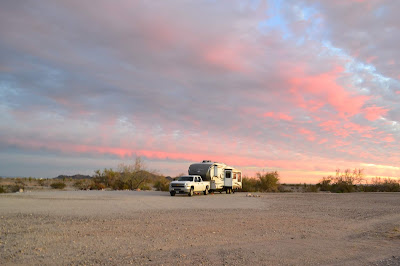 You can see some of the pink is starting to fade now. 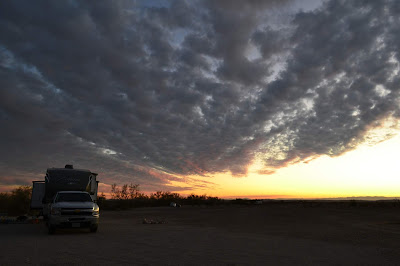 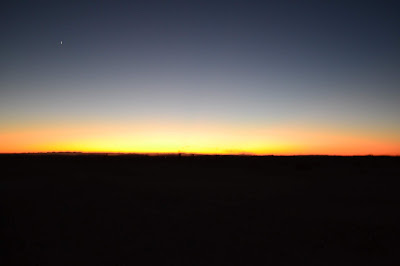