Brrrrr is all I can say, that cold north wind chilled me to the bone and I don't have any thermals here. ~laugh~ Sunny skies greeted us this morning and it looked wonderful outdoors but we needed extra layers for our walk or at least the beginning of our walk as we had to  across an open area before getting into the more protected walkway along the river. Out the door by 8:15 am we headed for downtown Albany and the Ray Charles Plaza to start our day with a walk. It was pretty protected along the path and was actually nice walking after the cold start crossing the open areas near the Bridgehouse. No pics from our walk as there was nothing new to see but I'll include a few from the Ray Charles Plaza that we visited before I started writing this blog. Well actually there was something new on our walk but we didn't get a picture of it. As we were strolling along a white tailed deer crossed the path in front of us, it was in no hurry and just walked calmly along. However we weren't quick enough to realize what it was and get our phones out to snap any pics, so you'll have to take my word for it. 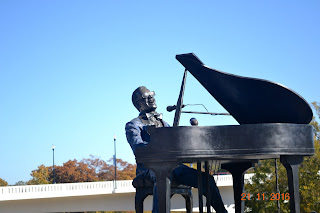 This statute rotates constantly, the attention to detail is amazing and the sound of his voice wafts from hidden speakers around the area. Soft, muted, and very soothing sounds. I would say Albany are very proud of their home town fella. 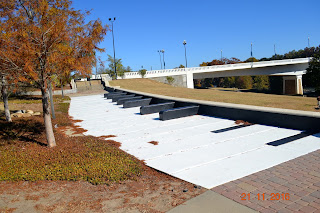 Ending our walk in a much warmer temp than we started in as we made our way back to the truck we truly enjoyed the warmth and appreciate our good fortune. We drove approximately a half mile to the bricked street that holds the Science Museum, History Museum and Weatherbee Planetarium. Thronateeska (pronounced Thron-a-tee-ska) Heritage Center houses the Science Museum and the Planetarium in the same building. Thronateeska is a word in Creek Native American tongue meaning 'the place where flint is picked up', they used the flint they found in the area around the Flint River/Albany to make arrow heads in their time.

The street is literally a brick street with a once busy rail line running down the middle. The rail line is no longer used but the it is the only brick street left in all of Albany. 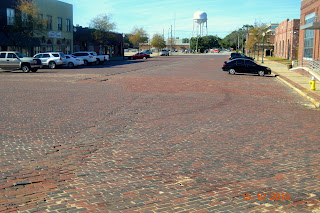 Not the best picture but it gives you an idea of the width of the street. You can see the line where the tracks run down the middle and a bit further down the actual tracks are still there. The Thronateeska Center is the building on the right in front of the little black car.

We were disappointed with the experience but would visit again if the train exhibit was open and a different 'history' display were available. We entered in time for the 10:30 am showing in the planetarium of the Season of Light which is a history of how and why we celebrate the Winter Solstice and Christmas. It was a 30 minute presentation that was well done and beautifully displayed on their 40' dome ceiling. It was however not something I would associate with a Planetarium as there was little about the Milky Way, stars, planets, etc but some thoughts on the 'star of Bethlehem' and why we celebrate Christmas on Dec 25 and the Ukrainians celebrate Jan 6, as well as the Jewish Hanukkah festivities. No pics as it's hard to take pictures when it's totally dark and we aren't the only ones watching the show. After the show we wandered into the Science Museum which was basically a lot of painted murals and explanations of finding artifacts, sediments layers, evolution of various animals, etc. A couple of displays about electricity and a few visual experiments to try but nothing exciting. They had a lot of Santa's on display. 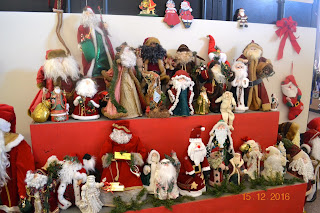 These Santa's are from the local man that plays Santa every year, he has approximately 4000 pieces of Santa memorabilia that he has donated to the museum. Most of his collection represents the "history" in the History Museum's changing 'history' display. Some of his pieces are in the Science/Planetarium building as well.

After leaving the Planetarium and Science Museum we wandered a few feet to the History Museum, which also included the Map Making and Surveying Museum. We found it to be lacking in many things but still looked around at some of the older equipment. Off to the side of the Mapping room was the 'changing' display rooms which all housed various Santa related objects, including a 20' miniature house/town display that one would normally see on a mantel during this season. As we were getting ready to leave I asked about the huge train outside and how to get to it, but we were told it is under renovations and is off limits at this time but we could look at from the end of the outside patio. So that is what we did. 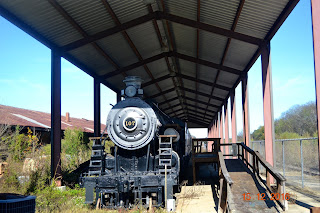 The train was donated from elsewhere and I can't recall where she said. There are a number of cars attached and I'm hoping that at some point we will be able to visit this exhibit and learn something about it's past. 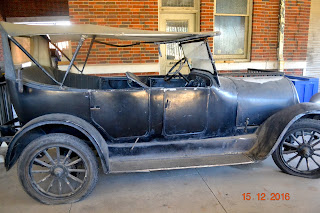 This old car is waiting to be restored as well. Not sure what it is as there were no markings that I could see. I think Fred Flintstone may have used this car as there is a hole in floor boards under the driver's feet. ~laugh~

Home after our disappointing visit but at least we learned that we aren't interested in returning to those things unless the train exhibit is open, or perhaps a different time at the Planetarium to see a different show. It was extremely inexpensive at $3.50 each plus tax. Both of us toured these things for less than $10. Home was a wonderful place to be as the sun had warmed up enough that I could sit outside and eat my lunch while enjoying my book for an hour or two. It was very nice until the wind picked up and drove me indoors. Spent some more time reading and prepping dinner. Tonight's menu is Tequilla Lime Chicken Breasts, steamed veggies (mushrooms, asparagus, celery, red peppers, green beans, broccoli, carrots), mashed garlic potatoes. Sounds not too bad, huh? ~laugh~ Sorry not enough to share. Maybe next time.

So on that note, I'm going to sign off and enjoy the rest of the evening with my book and snuggle in as the temps will be around the freezing mark overnight tonight. Thanks for stopping by, hope we didn't bore you too much. ~laugh~